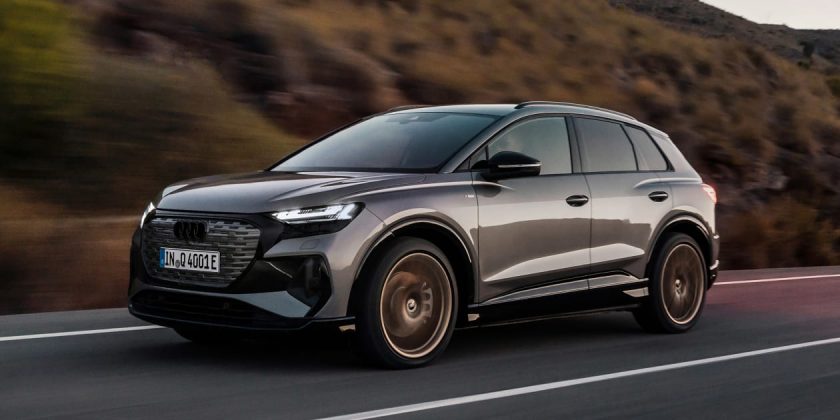 Audi has become the latest brand to enter the booming market for small electric SUVs with not one, but two entries. Say hello to the Audi Q4 e-tron, which is available in conventional SUV form or as a coupe-SUV Sportback model from launch.

It’s the first production Audi on the VW Group’s MEB electric car platform, and it goes on sale in the UK towards the end of 2021. Like the Mercedes EQA and the Volvo XC40 P8 Recharge, it’s another example of a premium European brand entering its home market with a compact electric SUV before Tesla can get the Model Y on our roads.

As well as being Audi’s MEB debut, the Q4 e-tron is also the first premium brand car on the platform. As such, it comes with several key differences keeping it at an arm’s length from its more mainstream Volkswagen ID.4 and Skoda Enyaq iV siblings – both of which share their platforms and electric drivetrain technology with the Audi. Better materials, more tech and more power are all on the agenda.

There’s a divergence in bodystyle between the conventional Q4 e-tron and the swoopier, more aerodynamic Q4 e-tron Sportback, while Audi’s compact electric SUV will also be available with three different powertrain options from launch, including a quattro all-wheel-drive version with 295bhp.

The Q4 e-tron line-up opens with the Q4 e-tron 35 model, which uses a battery with 52kWh of usable capacity mounted under the car’s floor.

This battery powers a 168bhp electric motor at the rear axle, with 310Nm torque. Audi claims 0-62mph in 9.0 seconds and an electronically limited top speed of 99mph. Audi also says the car is capable of a 212-mile range under WLTP. The Sportback model, meanwhile, makes a case for itself with range-conscious buyers through its greater aerodynamic efficiency: it can cover up to 217 miles on a full charge.

At the plugs, the Q4 e-tron 35 comes with 7.2kW AC compatibility for home wallbox recharges, and is able to charge at 100kW from a roadside CCS rapid charger.

The Q4 e-tron 40 is the middle option in the line-up. This is equipped with a larger battery pack rated at 77kWh net, and gets a more powerful rear motor too, rated at 201bhp and 310Nm. 0-62mph takes 8.5 seconds but top speed remains limited to 99mph. Range increases significantly, to 323 miles on a full charge, and though the Sportback version of the 40 model has not yet been fully homologated, Audi expects it will manage 328 miles from full to flat.

At the top of the line-up sits the Q4 e-tron 50 quattro, which is an all-wheel-drive option making use of an additional electric motor driving the front axle. It uses the same 77kWh battery as the Q4 e-tron 40, but its dual electric motor system develops 295bhp and 460Nm torque. 0-62mph is slashed to 6.2 seconds and top speed increases to 112mph. 303 miles of range is claimed with the sleeker Sportback model rated at 309 miles.

Both the 40 and 50 quattro versions come with an 11kW AC charging standard, while they can recharge at a CCS rapid charger at a rate of up to 125kW. Audi says around 81 miles of range can be added in around ten minutes, for drivers needing a short burst of additional charge to finish a journey.

Audi drive select is available on the Q4 e-tron and standard in all the Sportback versions. Its configurable drive modes alter the throttle and steering characteristics between five settlings, including a sporty Dynamic mode, an Individual mode allowing custom settings, and also a Range mode, which makes the car operate at maximum efficiency.

Sports suspension is fitted as standard on cars in sporty S Line trim, while electronically controlled adaptive dampers are optional on the Q4 e-tron.

Audi says that the finished car is 95 per cent the same as the Q4 e-tron concept car from the 2019 Geneva Motor Show, and that the Q4 e-tron and its Sportback sibling are the next evolutionary step in the firm’s developing electric car design language.

It achieves a drag coefficient of 0.28cd (0.26cd for the Sportback) thanks to its aerodynamically focused design. Many small features – from little fins on the bottom lip spoiler, to the mirrors, the flat underbody and the front grille with its closing louver, contribute to the Q4’s slippery profile. A sportier look is introduced for S Line trim models, which get a racy bodykit.

Lighting front and rear is an important element of the Q4 e-tron’s design. The car is the first Audi to be offered with a new digital LED headlight technology with four different lighting signatures that the driver can change between. It’s also the first of Audi’s smaller models to feature a full-width LED taillight bar at the rear.

Inside lies what Audi suggests could be one of the Q4 e-tron’s major selling points: an amount of space that comes close to that in its largest SUV, the Q7. The impressive carrying capacity is largely thanks to the less stringent packaging requirements that come with electric drivetrain.

Storage is another aspect of the Q4’s innards that Audi is keen to highlight. The interior has a large centre console with multiple functions and sockets, including an optional phone charging box, while all four doors have a large cubby suitable for carrying one litre water bottles.

Materials include open pore wood and aluminium finishes on the dashboard alongside soft touch plastics, but surfaces and fabrics made from recycled materials will also be available. Buyers can choose an upholstery mix of leather and man-made leather, or full Nappa leather. An upholstery option using recycled PET bottles will also be offered – each seat using the material of 26 bottles. The floor and mats also contain recycled materials.

The Q4 e-tron’s boot stands at 520 litres measured to the windowline (535 litres in the Sportback, but the coupe profile means space above the windowline is less). While the rear bench doesn’t quite fold flat, the amount of space when you do drop it down expands to 1,490 litres (1,460 litres Sportback).

The Q4 e-tron is fitted as standard with a 10.25-inch digital instrument panel, with Audi’s full size 12.3-inch Virtual Cockpit system available on the options list. Similarly, the 10.1-inch central infotainment screen can be upgraded to a new 11.6-inch MMI Plus touchscreen, though this won’t be available directly from launch.

The 11.6-inch MMI Plus display introduces enhanced navigation with a route planner incorporating charging stops into any longer journeys and Google Earth overlay for maps. MMI Plus also introduces live traffic data and an on-board Wi-Fi hotspot for passengers.

The Q4 e-tron heralds the introduction of the Audi augmented reality head-up display. This new system uses clever technology to make it appear as if key driver information is not being shown on the windscreen itself, but is instead being projected into live space ten metres ahead of the car. Navigation prompts appear to float over the road ahead and guide the driver to the correct exit at a roundabout or the correct lane at a junction.

The augmented reality tech works with some of the Audi’s extensive driver assistance and technology features too, including an adaptive cruise control system with steering assistance.

Various collision warning and avoidance systems are available, as is a predictive efficiency assistant that uses navigation data and traffic sign recognition to deploy the Q4’s battery in the most efficient manner possible for a journey. Exactly what will be standard equipment and what will be optional will be revealed when the car’s UK specification is announced.

So far Audi has confirmed that the Q4 e-tron will go on sale in Europe this June, and UK cars will also be a part of the summer rollout, arriving in June and July.

All Sportback versions of the Q4 e-tron carry a premium of €2,000 over the standard SUV.

What will the new Audi Q4 e-tron have to beat? These are the best electric cars on sale right now…