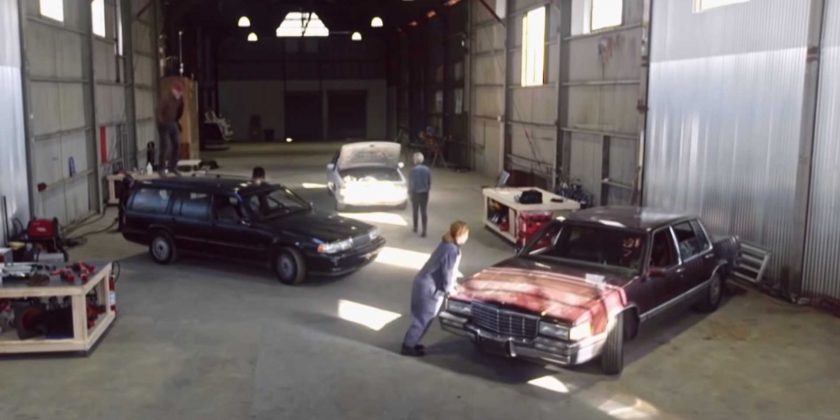 Simone Giertz and Laura Kampf take on the TV star.

Many of you will know Adam Savage from his exploits on the show Mythbusters. After an amazing tenure on the Discovery channel, he made a brief return to the big screen with his show Savage Builds. The most recent episode teases a Mad Max-style car battle.

Expert inventors and internet personalities Simone Giertz and Laura Kampf will be taking on Savage in the build and battle challenge. You may know Giertz for inventing many useful and useless inventions in her exploits on YouTube. Meanwhile, Kampf has made a name for herself in much the same way, by featuring her weekly builds online.

Semantics aside, each car will be fitted with three targets – one on the top and two on the sides – and points will be awarded for taking them out. While Laura and Adam opted to attack from afar, Simone focused on close-quarter weaponry.

In combatting the brute force approach of the other two, Giertz’s modifications to her chariot are looking to puncture the tires of the competition. The focal point of the alterations is a spiked tail that aims to rid the competitor’s tires of air. As the race will take place on a loose surface, a slashed tire is bound to make any vehicle extremely difficult to control.

Contrary to the other vehicles, Laura is going for a battering ram approach with her vehicle. Despite the bulletproof reliability of the Ford Crown Victoria, a vehicle that has served the American police force for decades, she is beefing up the front of the car to bash through the other competitors. She also fitted the Crown ‘Vic with a skeet shooter target machine to attack other vehicles at range.

Last but not least, Adam Savage’s weapon of choice is a pitching machine armed with golf balls. His goal is to pick off the competition from afar while defending himself with cunning and a set of metal tusks mounted to the front of his vehicle. Each approach ultimately makes for an incredibly entertaining battle at the end of the episode.