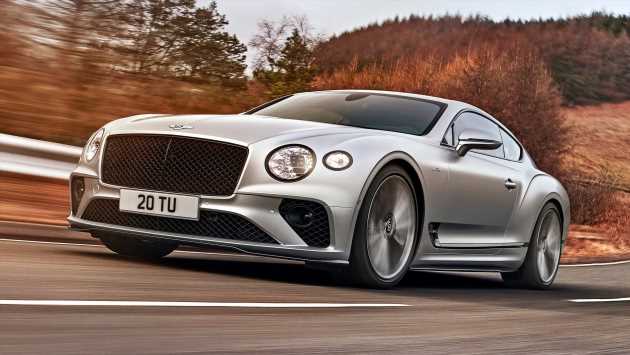 The new Bentley Continental GT Speed is the most capable, performance-focused Bentley ever, but won’t compromise comfort and luxury

Bentley has revealed what it’s calling the most dynamic road car in the British brand’s 101-year history, the third-generation Bentley Continental GT Speed.

The new Speed model sits at the top of the Continental GT range, adding more power and performance, as well as increasing the GT’s handling potential, separating it from the rest of the line-up with Speed-specific styling touches.

Like the rest of Bentley’s current and most recent Speed-badged models, this new Continental GT Speed is powered by a tuned version of the firm’s 6.0-litre twin-turbocharged W12 engine, producing 650bhp and 900Nm of torque.

That considerable output is sent to all four wheels through an eight-speed dual-clutch automatic gearbox with launch control, so despite the car’s no doubt chunky kerbweight (the standard Continental GT W12 weighs 2,244kg), it’ll sprint from 0-60mph in just 3.5 seconds and hit a top speed of 208mph.

Bentley says the gearbox’s shifts are twice as fast in Sport mode compared with the standard W12 Continental, while the powertrain has been calibrated to make the most of the enhanced output, holding onto gears longer in Sport mode, and downshifting earlier.

An optional carbon-ceramic brake system has been introduced to ensure the Speed stops as well as it goes. The 10-piston front calipers are joined by four-piston rear items, while the carbon-ceramic material for the discs helps shave 33kg of unsprung mass compared with a standard steel brake set-up.

The car retains Bentley’s Variable Displacement system, which can shut down half of the engine’s 12 cylinders under certain conditions to help improve efficiency. Although given the standard Continental GT’s claims of 20.8mpg and 308g/km of CO2, the even more powerful Speed will still be far from economical.

Bentley’s engineers have equipped the Speed’s chassis with four new pieces of tech to contain the extra power and make the car more engaging to drive. This includes an electronically controlled limited-slip differential on the Speed’s rear axle for greater on-throttle adjustability, according to Bentley. It’s the first time the brand has used an eLSD.

It’s joined by an Electronic All-Wheel Steering system to further improve agility. At low and medium speeds the rear wheels turn in the opposite direction to the fronts, helping boost agility. Its effects are more prominent in Sport mode, according to Bentley, where all of the Speed’s new systems combine to deliver “a level of agility unlike any other Bentley road car.”

At higher speeds the rear wheels turn in the same direction as the fronts to improve stability.

The car’s active all-wheel drive system has been recalibrated in all drive modes, which the brand says contributes towards “a noticeable character shift relative to the standard Continental GT.”

More power is sent to the rear axle in Sport, while the different personality has also been released by an ESC system that allows a greater degree of freedom for the driver before intervening.

On top of this, the Speed’s three-chamber adaptive air suspension and the 48-volt active anti-roll tech – called Bentley Dynamic Ride – has also been tuned to maximise cornering potential, but without an impact to comfort.

Despite being the most capable, performance-focused Bentley ever, the Speed is still a GT so needs to deliver comfort and refinement, as well as practicality.

Grand Touring capability comes courtesy of the 2+2 cabin and 235-litre boot, while a host of new styling parts and trim options make their debut on the new Continental GT Speed.

Outside, the car sports a dark-tinted main radiator grille and lower grille, there are chunkier side sills and ‘Speed’ badging on the front wings.

A new set of 22-inch ‘Speed’ design alloy wheels with the option of a dark tint or a black gloss finish feature, too.

Inside, there is more unique trim and badging for the flagship, with plenty of potential for personalisation as well.

There are 15 main and 11 secondary colours for the leather, while the interior features a ‘duotone’ colour split in leather and Alcantara that’s also applied to the steering wheel.

The centre console can be finished in a new ‘Dark Tint Engined Turned' aluminium pattern, there’s ‘Diamond in Diamond’ quilted leather as standard inside, plus embroidered Speed badging for the headrests and a badge on the car’s dash.

Piano black veneer is standard, but of course, as the range topping Bentley Continental GT customers can choose from a range of different wood veneer finishes to change the spec of the car inside, as well as adding plenty of other personalisation options.

Bentley hasn’t yet confirmed pricing, but given the standard W12 Continental GT’s £159,900 price tag, and the step up in price from other ‘regular’ Bentley models to their Speed-badged equivalents, the new Continental GT Speed could cost more than £180,000 when it goes on sale in the summer.

What do you think of the new Bentley Continental GT Speed? Let us know in the comments section…