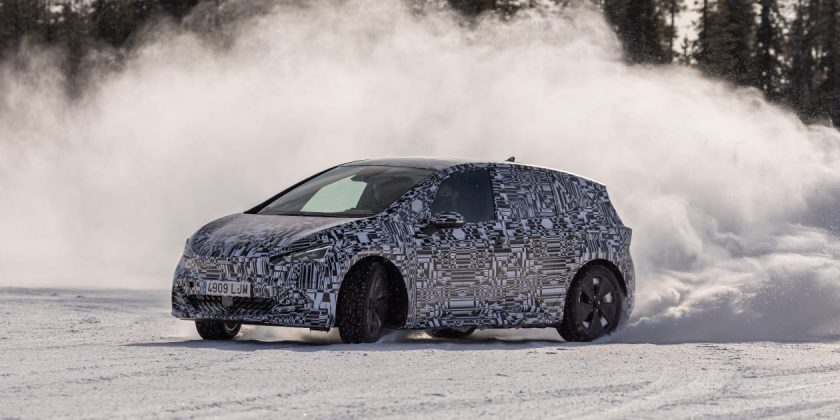 Upcoming Cupra Born will be revealed in full next week

Spanish performance brand Cupra has confirmed it will unveil its first electric vehicle, the Cupra Born, on 25 May.

The car make its on the day in an entirely digital presentation at 11am, but Cupra has already all but unveiled its Volkswagen ID.3 rival in a series of revealing pre-reveal teasers.

Save for a set of production-friendly alloy wheels and a new badge, the Cupra Born looks near identical to the SEAT El-Born concept from the 2019 Geneva Motor Show. It shares the same short bonnet, fared-in radiator grille, large quarter light windows and tailgate spoiler.

It should also line-up with the expectations set out late last year, when the El-Born was previewed wearing Cupra badges. The production-ready Born EV will also feature a range of sporty styling cues, such a lowered ride-height, 20-inch alloy wheels, aggressive front and rear bumpers, finned side skirts and a pair of figure-hugging bucket seats.

Cupra says its engineers have racked up thousands of miles during the Born’s development programme, at temperatures as low as -30°C, with most of the tests designed to stress the limits of the car’s adaptive dampers and chassis control systems.

The Cupra Born is based on the same MEB underpinnings as the Volkswagen ID.3, with an electric motor powering the rear axles.

Cupra says the Born will go from 0–31mph in 2.9 seconds, but the rest of the car’s performance specs are yet to be confirmed. Back when SEAT was handling the project, though, the Born was due to receive a 201bhp electric motor, which would give the EV a 0–62mph time of 7.5 seconds.

A battery pack with a nominal capacity of 82kWh means that a range of up to 310 miles under WLTP should be possible. The ID.3’s smaller 62kWh nominal battery pack will be available on lower-range versions of the Born, providing around 260 miles on a full charge.

With the MEB platform comes 100kW DC charging, meaning the hatchback can recover an 80 percent charge in around 47 minutes or take on 161 miles of range in just 30 minutes.

Like all of the Volkswagen Group’s MEB vehicles, the Cupra Born has a long wheelbase relative to its overall length, which should allow it to deliver the interior space of a car from the class above. As such, boot space should be on par with the SEAT Leon, but there should be more legroom for rear seat passengers.

The Cupra Born’s cabin is similar to the ID.3’s with a digital instrument binnacle, a floating 10-inch infotainment screen and touch-sensitive controls for the car’s heating and ventilation system. It will also feature a pair of racy bucket seats and a sporty Alcantara-trimmed steering wheel.

Cupra has also confirmed the Born will feature the ID.3’s new augmented reality head-up display, plus smartphone connectivity via the car’s infotainment system and an integrated heat-pump system that does not draw energy from the car’s battery pack to warm the cabin.

Given the Cupra Born’s upmarket branding, we expect it will stray from the Volkswagen ID.3’s pricing strategy.

To that end, prices will likely be comparable to the current-generation Cupra Leon or Mk8 Volkswagen Golf GTI with a smaller number of higher-spec models to choose from, starting from around £34,000.