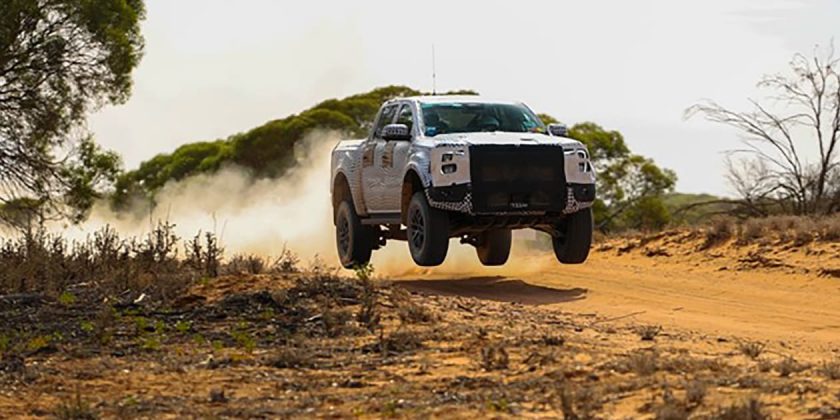 Ford is gearing up for the launch of the next-generation Ranger Raptor. The company has released a fresh teaser video that confirms the performance-focussed flagship version of the popular pick-up will make its debut on the 22nd February, meaning the Raptor should follow the standard model into the showrooms later this year.

The soundtrack accompanying the Ranger Raptor prototype in Ford’s video suggests the pick-up will be powered by a turbocharged V6 petrol engine, which could well be the same 3.0-litre 400bhp unit fitted to the Bronco Raptor. As in the Bronco, the engine will be mated to a 10-speed automatic gearbox and a four-wheel drive system.

Ford’s sporty V6 powertrain will be complemented by a thoroughly overhauled chassis and suspension system, which should feature beefed-up dampers, bigger brakes, a taller ride-height and wider axles with stronger differentials. There’s some new bash plates bolted to the underside of the pick-up, too, which you can make out when the Raptor is mid-jump in the video.

The Raptor may also inherit the Bronco’s “Baja Mode” drivetrain setting, which Ford says optimises the suspension, transmission and engine calibrations for maximum off-road performance. The setting even includes an anti-lag function for the turbocharger, which works in a similar way to the system found on rally cars.

Buyers will also get some extra show to match the added go. Under the camo wrap of the car in the video, we’re expecting more aggressive front and rear bumpers, a new bonnet and a new radiator grille with the same enormous “Ford” lettering found on the Bronco Raptor. The wheel arches of this prototype are also wider than those on the standard pick-up to account for the wider axles.

We expect the cabin will get a similar redesign. Raptor-branded sports seats, a new steering wheel and some model-specific trim should all feature. As the Raptor will be positioned as the flagship model in the Ranger line-up, it should also be fitted with Ford’s more expensive 12-inch infotainment system as standard.