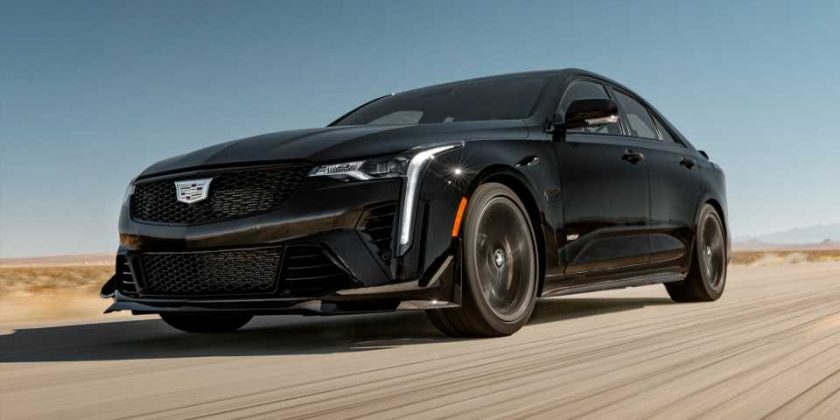 It’s hard not to get a sense of déjà vu from the 2022 Cadillac CT4-V Blackwing. Ostensibly a new M3-fighting compact luxury sport sedan, the CT4-V Blackwing looks and drives much like a mildly updated Cadillac ATS-V. Question is—is that a bad thing?

The old ATS-V was one of our favorite compact luxury sport sedans, thanks to its superb chassis dynamics, great steering, and driver’s car feel. Its imperfections—mostly centered around its 3.6-liter twin-turbo V-6—held it back from toppling the likes of the Alfa Romeo Giulia Quadrifoglio and Mercedes-AMG C63 in comparison tests against its segment peers.

Aside from the new name, Cadillac made only subtle changes to the CT4-V Blackwing over the ATS-V in an effort to take down the European heavyweights. Tuning and intake changes give the carryover V-6 a modest 8-horsepower boost, up to 472 hp, while torque remains unchanged at 445 lb-ft. The six-speed manual also carries over, but our test car was fitted with the new 10-speed automatic, which Cadillac says shifts quicker than the eight-speed it replaces. Other changes include the addition of the fourth generation MagneRide shocks, GM’s latest Performance Traction Management (PTM) system, and optional new carbon-fiber diffusers that are said to reduce lift by 214 percent—a somewhat meaningless yet still somehow impressive figure.

It all combines to make the CT4-V Blackwing an incredibly impressive package. “You know it’s a great car when you can go hard on your warmup lap and flat-out on the first hot lap,” features editor Scott Evans said. The Caddy is an incredibly confidence-inspiring car. Its chassis—GM’s Alpha 2, shared with the CT5 and Chevrolet Camaro—is among the best rear-drive platforms on the planet. Lightweight, composed, and well balanced, it’s augmented by heavy but quick steering and those otherworldly MagneRide dampers.

The PTM system waits in the wings should anything go awry. No longer buried in traction control menus, PTM is now controllable via thumb switch on the steering wheel. “It’s easy to forget how good PTM really is,” deputy editor Alex Stoklosa said. “I got into a big ol’ oopsie—I’m talking full brown note for a second—and even at a ridiculous angle, instead of the computers making things worse when I got on the gas, there was seemingly no intervention beyond my steering input and a boot full of throttle.”

The CT4-V Blackwing might have inherited the ATS-V’s best traits, but sadly it’s also been saddled with its worst ones, namely Cadillac’s twin-turbo V-6, which is forgettable at best. It makes decent power, but it’s uninspiring to wring out, its low 6,500-rpm redline and trucky exhaust note chipping away at what little joy there is to be had. The new 10-speed auto is pretty good, but it doesn’t downshift as quickly as the automatics in some of its rivals, and it can be slurry at times.

Our big request when we first drove the ATS-V was for Cadillac to fit one of GM’s V-8s under the hood. Seven years later, our wish remains the same. The 2022 Cadillac CT4-V Blackwing is a car that’s two cylinders shy of perfection. Maybe next time. Or given Cadillac’s promise to go fully electric by 2030, more likely never.