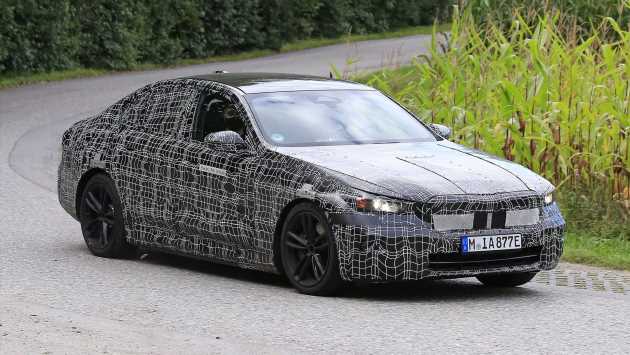 Our spy photographers have spotted the new BMW i5 electric saloon during its development programme. It’ll go on sale in 2023, alongside the next-generation 5 Series, becoming a new rival for the upcoming Mercedes EQE and the recently updated Tesla Model S.

The BMW i5 will share the same modular CLAR underpinnings as the combustion-engined 5 Series, but it’ll be powered by an updated version of the electric motor and battery pack found in the iX3. The SUV is based on a similar platform.

It’ll be powered by BMW’s fifth-generation electric powertrain, which comprises a 282bhp electric motor on the rear axle and an 80kWh battery pack. In the iX3, the system gives a maximum range of 285 miles, but the i5’s more aerodynamic shape could push this figure past the 300-mile mark.

If BMW uses the iX3’s powertrain in the i5, it’ll almost certainly use its charging system, too. The SUV is capable of charging at up to 150kW, meaning a 10–80 per cent recharge takes just 27 minutes. When connected to a home wallbox, the battery can be fully recharged in around 12 hours – and there’ll be an on-board 11kW charger if you get caught short.

With the exception of a blanked-off radiator grille and a new diffuser (which removes the standard car’s exhaust outlet) the i5 and the 5 Series will look identical.

BMW’s design approach for its eighth-generation executive saloon will be evolutionary rather than revolutionary. The new car has a similar silhouette and stance, with a set of sharper headlamps and a slightly more rounded nose – likely to improve its aerodynamics.

The BMW Group has already confirmed that it’ll launch 25 new electrified models across its range of brands – and roughly half of those cars will ditch combustion power.

Other stalwart brands in the BMW line-up will also gain pure-electric derivatives in the near future, such as the X1 SUV and the flagship 7 Series saloon, which will go on sale next year as a new competitor for the Mercedes EQS.