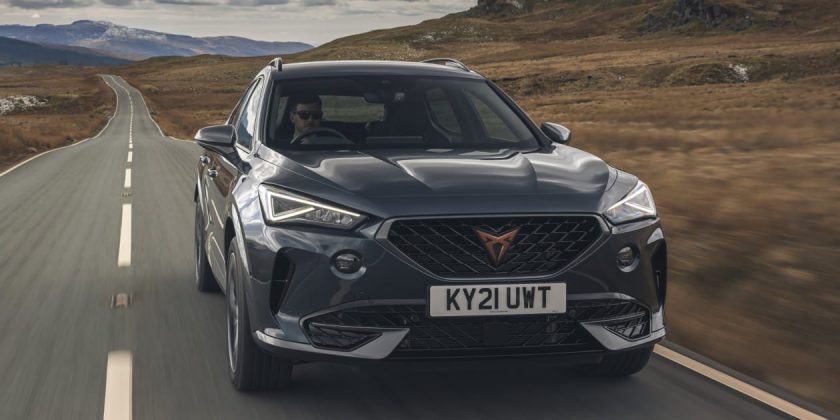 Cupra has added a few hundred pounds to the price of its Formentor SUV, along with a couple of new optional extras

Cupra has given the Formentor range a tickle for 2021, with some revised prices and an updated options list. Now, the SUV starts from £27,745 for the base-model 1.5-litre petrol variant, which is an increase of £345.

Buyers can now specify a couple of new metallic paint finishes on the car (Nevada White and Asphalt Blue), as well as an improved Beats audio system. Every DSG-equipped version of the Formentor now comes with a heated steering wheel as standard, too.

Cupra has added an electric tailgate option on the SUV’s entry-level V1 and V2 trim-levels, along with a top view camera on the range-topping VZ2 and VZ3 specifications.

The cheapest Formentor is powered by the Volkswagen Group’s familiar turbocharged 1.5-litre four-cylinder petrol engine. It develops 148bhp and 250Nm of torque, and it sends drive to the front wheels via a six-speed manual gearbox as standard. However, you can have a seven-speed DSG for an extra £1,535.

Next up, there’s a pair of turbocharged 2.0-litre four-cylinder petrol engines, with either 187bhp or 242bhp. Prices start from £32,440 for the former and £34,480 for the latter, while both come as standard with a seven-speed automatic gearbox and four-wheel drive.

Cupra also offers a couple of plug-in hybrid versions of the Formentor. The cheapest option starts from £36,170 – and it nets you the same 1.4-litre four-cylinder powertrain found in the Volkswagen Golf e-Hybrid. The system mixes the petrol engine with a 114bhp electric motor and a 12.8kWh battery pack for a combined output of 201bhp and 330Nm of torque.

With this system installed, the Formentor has a claimed 0–62mph time of 7.8 seconds and a top speed of 127mph. More importantly, Cupra says it’ll return 235.4mpg on the combined cycle, with emissions sitting as low as 27g/km of CO2. With a full battery, the e-Hybrid can also cover 37 miles on electric power alone, while a full recharge takes 3.5 hours when connected to a 3.6kW AC wallbox.

It has a combined output of 242bhp and 400Nm of torque, which Cupra says is enough for a 0–62mph time of seven seconds and a top speed of 130mph. The system will also return up to 188.3mpg and, depending on the specification, between 32 and 34 miles of electric range.

At the top of the Formentor range, there’s another turbocharged 2.0-litre four-cylinder petrol, but this one has a whopping 306bhp and 400Nm of torque, which Cupra says is enough for a 0–62mph time of 4.9 seconds and a top speed of 155mph. Prices start from £40,620.

Like before, the Formentor range is structured according to the buyer’s chosen engine. So, the least powerful 148bhp 1.5-litre petrol and 201bhp plug-in hybrid powertrains are only available with Cupra’s entry-level V1 and V2 specifications.

V2 cars are priced from £29,655 (with the 148bhp TSI engine) and come as standard with 19-inch alloy wheels, a heated steering wheel, heated front seats, a rear-view camera, park assist and leather upholstery for the car’s dashboard and door cards.

The 187bhp 2.0-litre Formentor comes with its own VZ1 trim-level, which features a more aggressive rear diffuser, sports suspension, adaptive dampers and speed-sensitive power steering. Buyers also get a power-operated tailgate while inside, there’s some bucket seats.

The fastest models in the Formentor’s line-up feature Cupra’s VZ2 and VZ3 specifications. Prices for the VZ2 specification start from £40,260 (with the 242bhp PHEV powertrain), with the only major differences being a few more creature comforts, such as electric seat adjustment, predictive adaptive cruise control and an electronic locking differential.

Cupra has also reserved an extra-special VZ3 trim-level for the 306bhp Formentor. It’s priced from £42,990 and features Brembo brakes and an exclusive set of 19-inch alloy wheels with copper highlights.

Cupra officials always hinted that the production Formentor’s styling would remain faithful to the concept version we saw at the 2019 Geneva Motor Show. Indeed, save for some subtle colour changes – the fins in the front bumper are black rather than body coloured, and the alloy wheels now have copper-coloured detailing – the two cars are pretty much identical.

Measuring 4,450mm long and 1,511mm tall, the Formentor is 87mm longer and 104mm lower than the Ateca, lending it a sportier, coupe SUV-like appearance, while flamboyant creases around the wheel arches give a more dramatic look. At the rear, there’s a full width light bar, which is a feature also seen on the Cupra Leon.

The Leon offered its dashboard design to the Formentor, too. Copper highlights are dotted around the interior and can be found on the stitching on the seat and the door trim, air vent surrounds and steering wheel.

The dash is topped off with a 12-inch touchscreen infotainment system. The display features customisable homepage functions, while touch-sensitive controls for the climate functions sit on a small ridge just below. The infotainment system also gets both Android Auto and Apple CarPlay as standard, the latter of which is able to connect wirelessly.