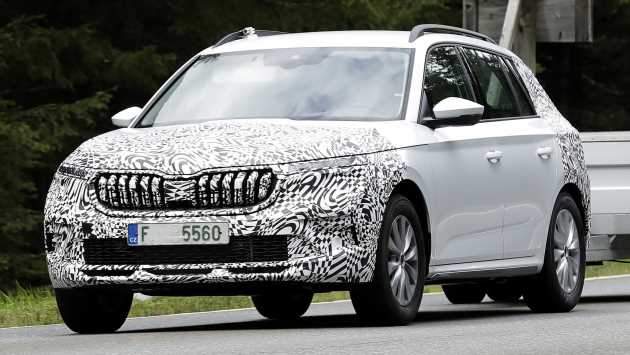 Testing is well underway for the upcoming facelifted Skoda Kamiq and while the Czech firm’s baby SUV won’t change too much under the surface, we can already see plenty of design tweaks despite the camouflage on this prototype spotted by our spy photographers.

The Kamiq small SUV launched in 2019, following on from the family-size Kodiaq and the mid-size Karoq – both of which have already received mid-life updates. The facelifted Kamiq will retain the same MQB A0 underpinnings as the Volkswagen T-Cross, SEAT Arona and the latest Skoda Fabia supermini when it goes on sale sometime in 2023.

The lineup of engines will be retained with a 1.0-litre, three-cylinder TSI petrol kicking off the range with 94bhp or 109bhp. Above that we’ll see the 1.5-litre, four-cylinder TSI petrol with 148bhp. The diesel option went off sale last year and isn’t likely to return with the facelift. Like the new Fabia we won’t see any electrified powertrains as the platform doesn’t accommodate them.

There will be several key differences for the new Kamiq in terms of design. The thin headlights will be carried over but the secondary unit beneath will be altered. There’s also a revised grille which could be coupled with new inserts, reshaped air intakes and a tweaked lower grille at the front. The Kamiq’s bulging centre section of its bonnet remains.

The facelifted Skoda Kamiq will be unchanged along the sides until you reach the rear lights, which should take on the new C-Shape design seen on the new Fabia. The bumper and roof spoiler should also receive a mild tweak.

The overall design of the cabin won’t change too much in the facelifted Kamiq, with top-spec models getting a 9.2-inch central infotainment touchscreen. Android Auto and Apple CarPlay will come as standard and like last year’s facelifted Karoq, the Kamiq should be able to receive over-the-air updates.

The current Kamiq is offered in three trim levels. The cheapest SE model starts from £22,080, and we can expect the updated Kamiq to receive a bump from this price tag. Topping the range should be a Monte Carlo version with larger alloys and blacked out exterior trim features.

Check out the best small SUVs and crossovers here..