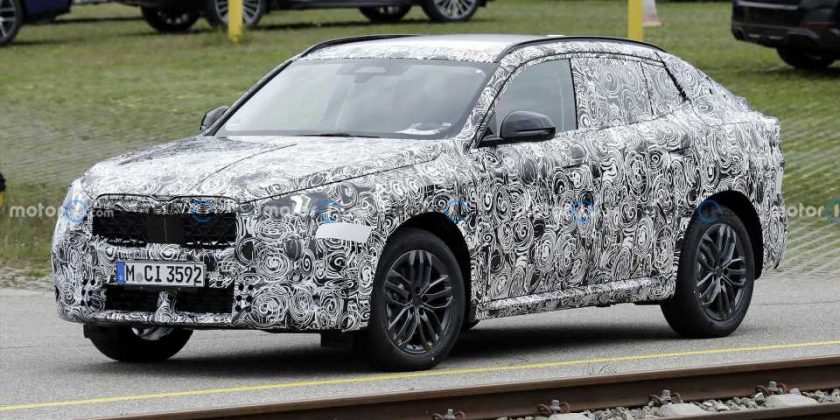 The camouflaged BMW prototype you see here is interesting for two reasons. First of all, it’s our first look at the next-generation X4 and we can spot some notable differences in design. Second, it may not be an X4, but rather, an all-electric iX4. Let’s take a closer look.

There’s no doubt we are looking at the sporty coupe version of the X3. The proportions are spot on, and in profile view, we can very much see an evolutionary interpretation of the current model. The beltline, side glass, and the Hofmeister Kink are essentially a match to the present X4, but the door handles are now flush with shallow pockets beneath them. Side mirrors are slightly different, and there’s no longer an up-kink to the door trim at the front. We’ve seen the same changes on next-gen X3 prototypes.

At the front, we can see narrower headlights sitting taller on the front clip, flanking a grille that’s only slightly larger overall. The lower fascia is largely hidden, but outlines of larger corner vents are visible. The grille itself has a mesh pattern, something we’d expect on a vehicle with an internal combustion engine but it’s hard to see any details behind it. Furthermore, there are no visible exhaust outlets at the back. That’s not to say there aren’t pipes tucked up behind the rear fascia. At the very least, it’s a different design compared to the current model.

We raise the iX4 question because a recent report stated the internal-combustion X4 could be dropped for the next generation. That isn’t confirmed, but the source is typically a reliable one. Seeing this prototype without any exhaust lends credence to the report, though to be fair, we’ve seen next-gen X3 test vehicles without discernable exhaust outlets as well.

If this is indeed a combustion-powered X4, it will likely debut sometime next year as a 2024 model. The iX4 is expected to arrive in 2026.

Check out the Rambling About Cars podcast for BMW news and more, available below.