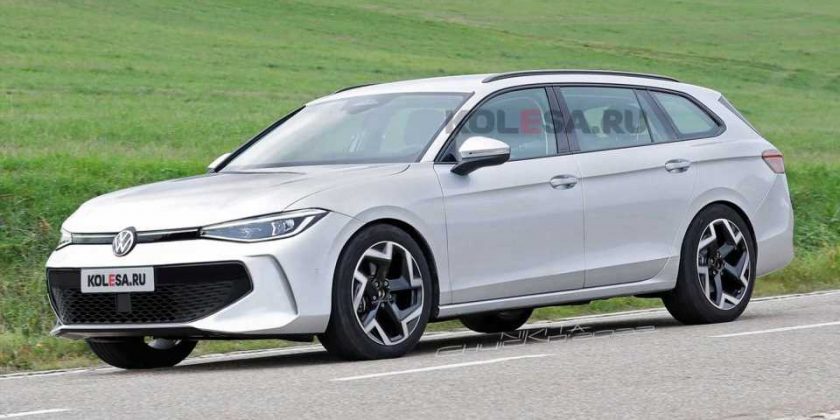 Exactly a week ago, our photographers in Germany caught the next-generation Volkswagen Passat testing on public roads with less camouflage than before. The test prototype was wearing Czech number plates and decals were hiding some of the exterior components, but in general, it provided a lot of information about the new Passat’s design.

For starters, the traditional Volkswagen grille we know from the current Euro-spec Passat is replaced by a much smaller grille in the same style as the brand’s ID family. The headlights are slimmer and seemingly inspired by the Golf 8. In the lower section of the front fascia, there’s a massive “smiling” grille and what appear to be vertical air intakes in the corners of the bumper.

The prototype from earlier this month had little camouflage covering the rear end and this rendering from Kolesa.ru proposes a LED strip connecting the taillights as a feature that’s not visible on the trial vehicles yet. That area is usually covered with tape matching the color of the body, though with the current trends in the automotive industry, such a design element doesn’t seem unlikely at this point.

If you are wondering why the new Passat is rendered in wagon form, this is because one of the most popular D-segment vehicles in Europe will be sold exclusively in long-roof form and only on the Old continent. Skoda, Volkswagen’s more affordable and practical brand from the Czech Republic, is responsible for the development of the new Passat, which will be produced alongside the next-generation Skoda Superb on the same assembly lines. As a side note, the Superb will be sold as both a liftback and a station wagon.

The new Passat will effectively become the last generation of the model to be sold with combustion engines when it is introduced late next year. It will ride on an evolution of the MQB platform and will feature a family of electrified gasoline and diesel engines meeting the Euro 7 emissions standards. With those regulations now expected to be watered down, we won’t be surprised if some of the TDI mills carry over with just minimal modifications from the current Passat in Europe.