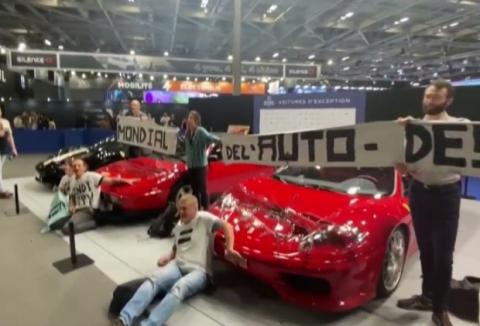 The group stated that 11 activists were arrested for pulling the stunt at the Paris Motor Show.

The recently concluded 2022 Paris Motor Show was dominated by electric vehicles from various car brands. However, a group of “Eco-Warriors” – fanatics of the Extinction Rebellion, went on a protest, holding up banners and chanting slogans.

Reports stated that the group called for an end to advertising individual ownership of private vehicles & instead to improve public transportation. They mentioned that promoting personal vehicles as ‘transport of the future’ is “absurd”, considering the current fuel and electricity prices.

Extinction Rebellion is said to be a new wave of campaigners using civil disobedience to draw attention to their cause. However, they have largely been condemned for causing disruption to ordinary members of the public. The group stated that 11 activists were arrested for pulling the stunt at the Paris Motor Show.