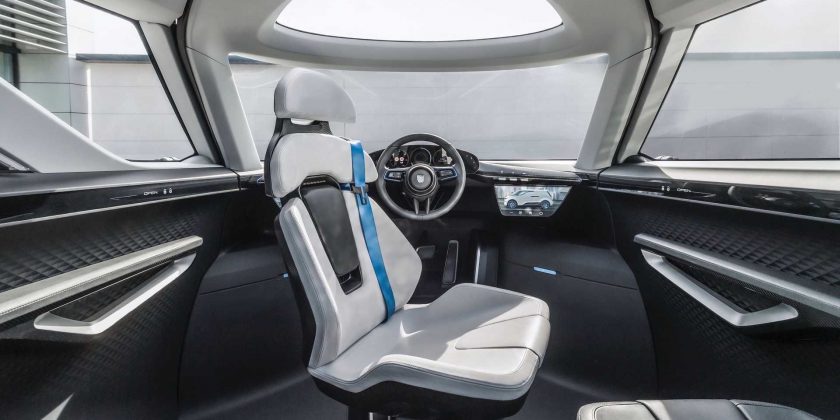 In November 2020, Porsche showcased 15 never-before-seen concept vehicles built between 2005 and 2019, and the Vision Renndienst was probably the most atypical member of the “Porsche Unseen” collection.

At the time, the automaker said the electric minivan was nothing but a 1:1 hard model study its designers completed in 2018 as a “free interpretation of a family-friendly space concept for up to six persons.” The photos released back then did not offer a glimpse at the interior, but fortunately, that changes today as Porsche has released the first photos of the Renndienst’s “modular travel cabin.”

What strikes you first is the central driving position, something the Vision Renndienst owes to the fact that it’s thought out as an autonomous vehicle. As Porsche’s head of design Michael Mauer explains,

“When I want to drive, I have more cockpit feeling than in any other car. And when I don’t, the driver’s seat can be rotated 180 degrees—with one swivel, it turns to face the other passengers. We worked on materializing these basic ideas for about a year.”

Equally striking are the Vision Renndienst’s asymmetrical side windows, which create two distinct areas inside. Passengers can retreat to the side that is closed if they want to take a nap, for example, while the other side’s large window bank offers an unobstructed view outside.

Then there’s the seating layout. While the driver reigns supreme in the first row and gets exclusive access to a massive digital instrument cluster with haptic buttons on the sides, the two passengers in the second row sit offset to the right and left in similar ergonomically shaped bucket seats.

Thanks to this layout, they can enjoy a clear view of the road ahead and their own dashboard screens (located either side of the steering wheel). The third row consists of a lounge-like bench seat with curved sides, with the headrests installed in a floating position to allow a clear view through the rear window.

Designed for the smartphone generation, the overall user experience is said to be dedicated to the digital lifestyle and the relationship between driver, passengers, and vehicle. Porsche doesn’t reveal more about that, but says it is building on an impressive brand history with the UX department while “boldly looking far into the future.”

We don’t get to learn much about the powertrain either, other than it is fully electric and hidden in the underbody, which contributes to the roomy interior. While the Renndienst study sadly won’t make it to production, some of the ideas implemented on it probably will.

So what’s next for the Renndienst? Ivo van Hulten, Porsche’s director of user experience design, says he wants it “to gain a soul,” possibly hinting at an AI assistant inspired by the K.I.T.T. talking car that he loved so much growing up. That would be a cool development, though not as cool as bringing the Renndienst into production with a Taycan powertrain, for example.