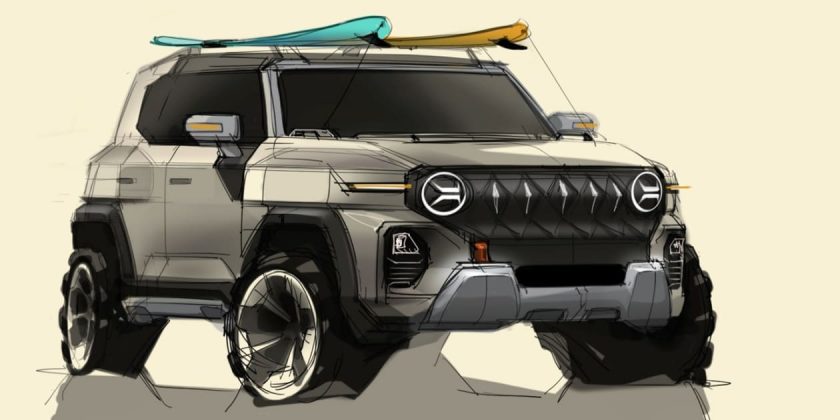 SsangYong has revealed a design concept of its next-generation SUV, offering a look at the Korean firm’s new styling direction.

Previewed by the X200 concept, the brand’s new design philosophy is called ‘Powered by Toughness’ but bears little resemblance to Ssangyong’s current line-up.

The front end features round headlights and vertical grille slats that bring certain Jeep models to mind, with a deeply sculpted bumper and extensive body cladding.

Muscular box arches accommodate beefy all-terrain tyres and give the X200 a wide-set, aggressive stance. The windscreen is flat and meets with a squared-off roofline, reminiscent of off-road icons like the Mercedes G-Class.

There’s more body cladding along the sills, and the utilitarian theme continues with a set of heavy-duty roof bars. The roof itself features a fold-away canvas section, similar to the sliding fabric roof that can be specified with the new Land Rover Defender.

The rear arches end abruptly with a short overhang and integrated tail lights, while the rear bumper features similar cutouts and body cladding as seen at the front. There’s no visible spare wheel, but four holes in the tailgate indicate that one could be fitted.

The overall look is that of a tough, purposeful off-roader with a retro feel, and builds upon the design theme showcased by the SsangYong J100 EV concept released earlier this year.

Speaking on the new design philosophy, a spokesperson for Ssangyong said:

“‘Powered by Toughness’ is a design philosophy that emphasises the importance that SsangYong places on the value of design. Along with the themes of strength and modernity, it robustly under-pins its long standing ‘Korean Can Do’ message which has been central to the Korando product line over four iterations, dating back to the original from 1983.”

For its future models, SsangYong is promising to use “eco-friendly powertrains”, and the J100 has already been confirmed as fully electric. The X200 may follow suit, and could use the brand’s upcoming dedicated EV platform.

In 2018, SsangYong revealed plans for a new pure-electric platform for mid-size and large SUVs. The first car on the new platform will hit showrooms in 2024, which could line up with an eventual production version of the X200 concept.

However, there is potential that, if fully electric, the X200 could utilise an adapted combustion-engine platform similar to the tech that underpins the brand’s Korando e-Motion.

The Korando e-Motion is SsangYong’s first full EV and uses a single 187bhp electric motor, which is powered by a 61.5kWh battery. On the NEDC testing cycle, this gives more than 260 miles of range.

Check out our list of the best small SUVs to buy now,…