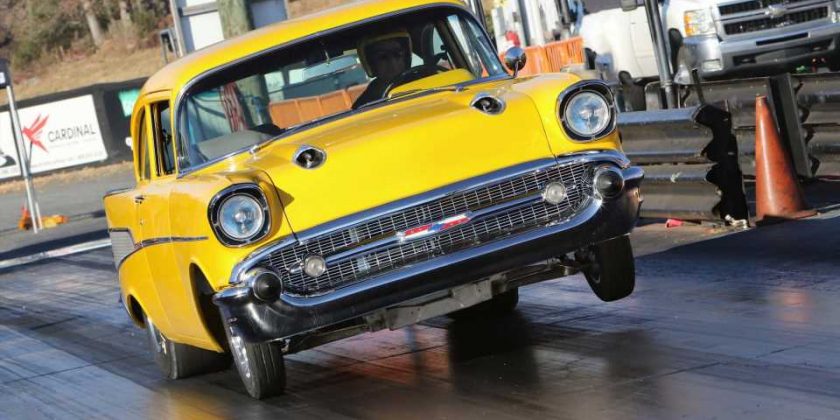 When we did the electric conversion on Project X for the 2021 SEMA Show we had just five weeks to install Chevrolet Performance’s eCrate system into our 1957 Chevy. Five weeks isn’t much time, and like most of the cars at SEMA ours was finished days before the event. And, just like many of the other SEMA projects, ours still needed sorting out.

Now, sorting out an EV is much the same as an internal combustion engine (ICE) build, but it’s a lot different in terms of electronics. With an EV, far more is controlled by the computers, and when dealing with 400 volt three-phase DC power there are a lot of redundant safety systems. When we finished the install before SEMA the throttle pedal was very touchy. With an EV, the motor is hitting full torque at one rpm. Compare this to an ICE engine, where the torque builds in a curve, and you can see how properly tuning things like the throttle pedal is even more critical.

So, after SEMA, X was shipped to Chevrolet so the engineers there could go over the car and fine tune the various EV systems. As Chevrolet Project Manager Prashant Ahire told us “After SEMA, the Chevrolet Performance team started working on tuning and calibration. Turning a streetcar calibration into drag race Performance EV requires a significantly large number of parameters—hundreds of thousands—to be verified and adjusted carefully. Calibration engineers from the production streetcar project at GM were consulted throughout the process to ensure that safety was not compromised.” With an EV it’s not just about ramping up the process, it’s about doing so while maintaining the safety of the system.

Once Project X was back at Cagnazzi Racing we decided we wanted to start some of our performance testing on the car before it shipped off to the PRI (Performance Racing Industry) show in Indy. PRI is a lot like the SEMA Show but more focused on the racing industry, so we wanted a few performance numbers before the show.

Our Project X was rolling on a set of older Billet Specialties wheels and seven-year-old Mickey Thompson street tires. With the instant torque inherent to EVs we knew the tires weren’t up to the challenge, so we gave a call to Mickey Thompson and they hooked us up with fresh sticky tires for the track. We wanted testing options, so they sent us a pair of Pro Drag radials (29.5/10.5R15) along with a pair of 15-inch E.T. Drag slicks (31.0/10.5-15W).

Our wheels were a bit dated as well, and the 15-inch skinny was limiting our choices for a street-friendly disc brake system up front, so Billet Specialties sent us a quartet of new Comp 5 SFI-Certified billet rollers for X. The new fronts are 17s and will let us get some bigger brakes on the front to slow down our 4,000-pound 1957 Chevy.

For the rear they sent us these beautiful 15-inch bead-lock drag wheels. Bead lock wheels are a pain to mount, but they sure do look great on the car. Plus, we won’t have to worry about the tire sliding on the hoop when we launch at the track.

For our first round of testing we headed over to the local 1/8-mile drag strip in Mooresville, North Carolina. This track has been in operation over 50 years and was the perfect place to start testing and gathering data for the team at Chevrolet Performance.

Our driver for the tests was Steve Johns. No, we didn’t choose him because he had a matching yellow helmet (although that was a nice bonus). He got the left seat because he’s a damned good drag racer with a ton of experience. He raced for Bill “Grumpy” Jenkins for over 20 years, so he was more than qualified to pilot Project X and give the engineers feedback on the car.

Of course, we didn’t just rely on Johns to give us his “seat-of-the-pants” feedback, we also had a host of electronics on board to track the EV system in X and monitor how the car was performing.

The EV motor in X was designed for the Cadillac Lyriq and is rated at 340 hp and 325 lb-ft of torque. Ours has been modified with a more aggressive gear reduction, but the system was never designed for hard drag racing. To get there will require a lot of passes and a ton of programming of the system.

It was early December but we were treated to excellent 70-degree weather when we arrived at Mooresville’s 1/8-mile track. Wheelie bars? Yep, the rear weight bias of the car and instant torque of the EV meant the front wheels were going to come up, and while grabbing big air looks great on film, it’s not the best for getting down the track. So, just in case, Cagnazzi installed a set of bars.

We have to say, one of the hardest things to get used to with EVs is the lack of engine sound, especially during things like burnouts.

The first runs were to try and work out what rear gearing was the best for our transmissionless 1957 Chevy. However, a software issue was causing power to be pulled from the car in the middle of the run. As Ahire explained, “At the 1/8th-mile drag race track, our team collected data logs and continued the calibration refinement, trying to gain more torque output from the drive unit than originally intended on the production street car. During this process, the data showed an early gain in torque. However, there was a drop in the mid-range due to a violation of current limits. The team gradually adjusted many parameters to improve the midrange performance without changing the low-end and 60-foot performance. The upcoming GM Hummer EV Truck has a Watts to Freedom (WTF) mode that allows a great launch and a short burst of higher torque for the best acceleration performance. The team working on Project X attempted something similar but with X we have a single motor propulsion system driving a conventional rear axle.” So, we would make a pass and the engineers from Cagnazzi and Chevrolet Performance would download all the data and upload changes. This went on for most of the day.

The new 17-inch Mickey Thompson tires for our shiny new Comp 5 Billet Specialties wheels showed up so we had them mounted and balanced. They required a flat lug nut with a shank and we couldn’t find any locally in 12mm (Corvette bearing hubs). Luckily, the speed shop at Mooresville Dragway had them in stock. In the internet age, it’s nice to be saved by a brick-and-mortar speed shop.

While the Cagnazzi and Chevrolet Performance engineers were digging through thousands of lines of code to solve our loss of mid-track power the rest of us were swapping rear gears in X to find the perfect balance between a solid launch and top-end mph. Fortunately for us the rear is a quick-change setup.

The process is simple: pull out six bolts, remove the cover, swap to the new gears, and then put the spilled fluid back in the rear. The whole gear change process only takes a few minutes. The Cagnazzi crew brought about every gear ratio you could think of to the track.

At this point our best 60-foot time was a solid 1.54 seconds. We were really happy with that time but at around 100 feet the system was dropping the voltage and killing our ET. The engineers kept working on the issue and eventually the car was waking up again around the 570-foot mark, but that loss in the middle was still hurting our overall time. The best analogy is an EFI car with fuel-control issues, but instead of running out of fuel, we were losing electricity flow. Even with these issues, we managed a best ET of 8.65, which, using math, works out to a 13.45 quarter-mile ET at 73.74 mph. As you can see by that ET and mph, something was still off mid-track, since that’s a low mph for that 60-foot time and ET. Our best times were on the Mickey Thompson drag radials with 3.75:1 rear gears.

While the brain trust looked at code, the mechanical side of the operation decided to try going a bit more aggressive on the rear gears.

After doing a smoky burnout to heat the Mickey Thompson Drag radials, Johns launched the two-ton 1957 Chevy. The driver’s wheel came up, there was a loud bang, and the Chevy bounced to a halt.

It seems we exceeded, by quite a bit, the load rating on the rear axles. With our short 5-week build time for SEMA, and nationwide parts shortages, we had to source a rear from whoever had it in stock. The unit was solid, but the axles weren’t up to our level of torque output. After doing some math, which included the gear reduction inside the Chevy eCrate motor and the rear gears, we were sending around 8,400 lb-ft of torque to the rear. That’s about 4,200 per axle, which was well beyond their ratings. Pushing stuff hard is a good way to find your weak spots, but with two broken axles, our testing day was done. The good news is that we were able to send tons of data back to GM so we can continue to work the power problem and eventually get this car down into the low 12s where it belongs.

So, with a solid 60-foot time and a ton of data, our first testing day was done. While the 13.45 (extrapolated) ET wasn’t what we wanted, it’s still impressive for a 4,000-pound Chevy that is having some teething issues. To put that in perspective, it’s the same ET that a lighter-weight 2002 LS1-powered SS Camaro ran, and only slightly slower than a 2010 Camaro SS both in terms of ET and 0-60 mph speed. It’s certainly faster than one would expect from an EV motor sourced from a Caddy SUV. After PRI, X will come back to Cagnazzi Racing and we will continue the process of working over the car, on both the mechanical and software side of the puzzle, to get it to go faster on the track. There are 12s in it and we’re not stopping till it gets there. Hey, Rome wasn’t built in a day. So stay tuned as we continue to fine tune our Project X EV conversion. Oh, and a set of solid “not going to break” axles are already installed and ready for the next testing day.