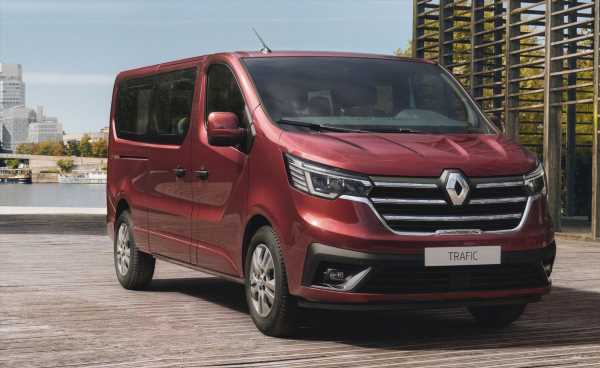 The third-generation Renault Trafic, a popular van in Europe that has been around since 2014, has been given another facelift following the refresh that surfaced in April 2019. There’s a new and “more expressive” front end, a fresh Rouge Carmin shade and a revised interior. The van also gets the latest generation driving aids and the Renault Easy Link multimedia system.

It’s not a day and night difference, but the Euro van you see here has a new horizontal hood and a vertical grille. Those are matched with new bumpers and full LED headlamps, joined by a chrome line.

The Trafic Combi (aimed at transport companies and large families) and SpaceClass (more VIP and luxurious; there’s a Signature version with ‘business class’ space) feature electrically folding mirrors, new 17-inch wheels (with diamond-effect on SpaceClass) and more elegant hubcaps. They are available in seven colours, including the new Rouge Carmin, a red hue that isn’t common on passenger vans. The changes are a lot more significant inside, where the Trafic gets a new dashboard. The fascia sports a horizontal strip that blends into the door panels, giving the impression of more space. A freestanding central screen brings a more contemporary passenger car look. Chrome trim can be found on the air con controls and shift knob, and the SpaceClass stands out with exclusive Gris Météor trim.

There are more storage areas – the total interior storage volume of 86 litres includes the new six-litre Easy Life drawer. Speaking of space, that’s the reason why people buy vans, and the Trafic offers cargo volume of up to 1,800 litres and modular seating for up to nine passengers. A notable upgrade is the inclusion of the latest drive assist features. The Trafic Combi and SpaceClass come with adaptive cruise control, active inter-city emergency braking, lane departure warning, blind spot warning, and a new front passenger airbag designed for two people, as the seat beside the driver can fit two.

No big change in the powertrain department, which has three diesel options: dCi 150 engine (manual and EDC auto transmissions, now with 5hp more), the dCi 110 (manual-only), and the dCi 170 engine (EDC auto-only). The EDC, which is a six-speed dual-clutch box, is equipped with auto start-stop. The whole range is compatible with the new Euro 6D Full standard.

The facelifted Renault Trafic Combi and Renault SpaceClass will be unveiled in early 2021, before it hits the market in March next year. The Ford Transit, Volkswagen Transporter, Peugeot Traveller and Mercedes-Benz V-Class are some of the Trafic’s Euro van rivals.