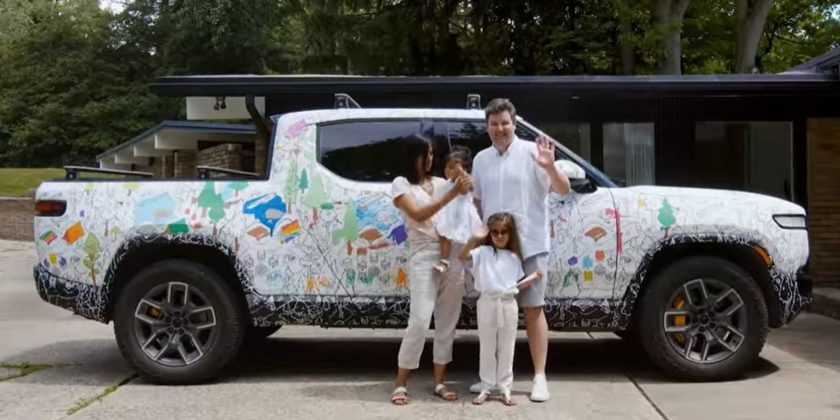 A family outing the Rivian way.

Rivian refers to their products as “electric adventure vehicles” and the videos they produce are all about family and adventure. In the latest production, we see Rivian bringing a pre-production R1T pickup to the homes of some of their employees for some family-fun.

The R1T that they brought had been wrapped in white, with figures of trees, canoes, tents, and other items you’d find outdoors drawn on it. The employees and their families were then invited to color in the figures. They then continue to drive the R1T to a number of employee’s homes until the truck is fully colored in.

I have to admit when Rivian first started their video series I wasn’t a huge fan. I wanted more technical details and a little less of the family/human story. However, after seeing more of what they’re putting out, I really like what they’re doing. They’ll be plenty of time to go over all the technical stuff before the launch.

Their vehicles aren’t typical “commuters”. Yes, they can do that also, but Rivian really sees the biggest value of their electric trucks and SUVs being used to bring the family together on adventures.

As a small thank you, we surprised a few of them at their homes and let them put the final touches on one of our test vehicles. To all our Rivian families, we love being on this adventure with you.

As with most companies, during the COVID-19 crisis, many of Rivian’s employees are working from home. Rivian decided to bring the adventure to them this time, letting their families be part of this fun event and hopefully bringing the team closer, even though they are still far apart. Well done, Rivian.

*Note: Rivian offered a special thanks to their production team for keeping the crew and families safe during filming. The production team wore masks, used sanitizer, and kept a healthy distance at all times.