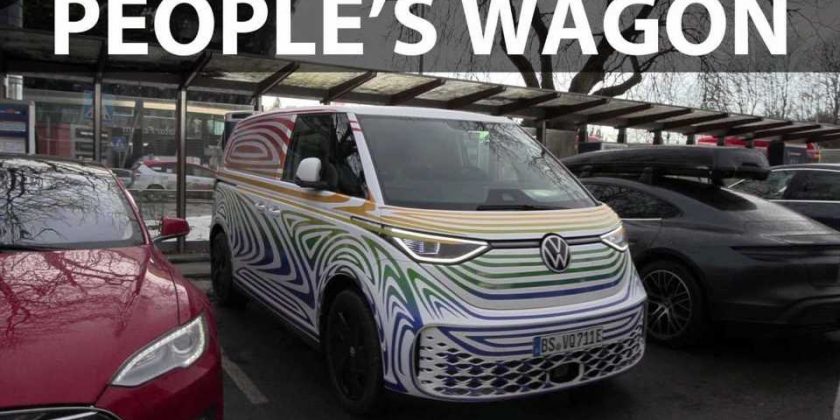 Bjørn Nyland came across a surprising EV while charging his own electric car at a fast-charging station in Norway. He spotted a camouflaged Volkswagen ID. Buzz that parked in an adjacent stall.

That’s quite unexpected, but as a professional, Bjørn Nyland managed to make a pretty quick and detailed overview. We guess that the car is undergoing tests in Norway.

By the way, the Tritium charger that was supposed to charge the ID. Buzz reported an error and was out of service. That’s unfortunate (both for the ID. Buzz crew and us, as we would like to see the charging power output).

The spotted Volkswagen ID. Buzz gives us the impression of a really spacious van – much larger than the nearby Nissan e-NV200.

The front overhang is quite short. Below the plate, there seems to be a radar and of course some air intakes for cooling.

The dashboard was covered, so most likely we will have to wait until March 9 for the world premiere of the ID. Buzz.

Not only that. As in the case of other MEB-based models, there are drum brakes in the rear (the front brakes are disc, as usual). Let’s recall that thanks to regenerative braking, electric cars do not use the brakes as much as internal combustion engine cars, which allows using less expensive drum brakes.

Series production of the Volkswagen ID. Buzz will start later this year. As we understand, there will be both passenger and cargo versions. A few years ago, the German manufacturer showed concept versions of both.

Potentially, this all-electric van might be equipped with the largest battery pack out of EVs based on the MEB platform so far. In 2017, the manufacturer hinted at 111 kWh and 270 miles (434 km) of EPA range. With dual-motor all-wheel-drive (275 kW), the proposed 0-60 mph acceleration time was about 5 seconds.

In the case of ID. Buzz Cargo concept in 2018, Volkswagen mentioned a battery capacity range from 48 kWh to 111 kWh for up to 550 km/342 miles of WLTP range. This version had a 150 kW rear-wheel drive unit (with an option for an additional front motor and all-wheel drive).

Volkswagen works also on an autonomous version. Who knows, maybe there will be also a derivative from Skoda, who showed a few images in 2021.