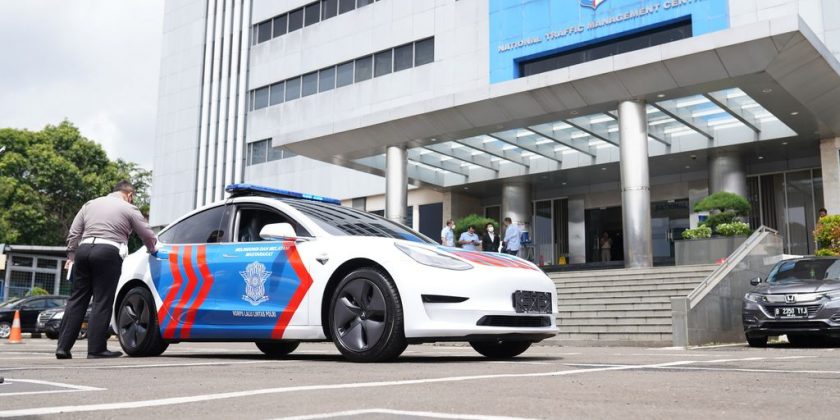 The Indonesian National Police (POLRI) recently welcomed the first electric vehicles to its fleet, with a Tesla Model 3 patrol car joining its Traffic Corps (Korlantas), while a Hyundai Kona Electric is serving as an escort car for the West Java governor’s office.

According to detikOto the Model 3 was jointly donated by Ikatan Motor Indonesia (IMI) and Prestige Image Motorcars, and is the Standard Range Plus variant. In this guise, the EV comes with a rear-mounted electric motor rated at 287 PS (283 hp or 211 kW) and 450 Nm of torque, which is good for a zero to 100 km/h time of 5.6 seconds and a top speed of 225 km/h.

Thanks to its 54-kWh lithium-ion battery, the car has a range of around 400 km, and the estimated cost of charging to get that distance is said to be only 70,000 rupiah (RM19.81). For police duties, the loaner unit is dressed in an official livery and fitted with police lights on the roof. While not officially sold by Tesla, the Model 3 Standard Range Plus is available via Prestige Image Motorcars for the price of 1.5 billion rupiah (RM424,425).

As for the Hyundai Kona Electric, it is based on the sole Signature variant sold in the country. A front-mounted electric motor provides 136 PS (134 hp or 100 kW) and 395 Nm, allowing for a century sprint time of 9.9 seconds and a top speed of 155 km/h. A 39.2-kWh lithium-ion polymer battery provides up to 289 km of range following WLTP regulations.

Like the police Model 3, the Kona Electric serving in West Java also gets the appropriate livery and police equipment. For civilians, the Signature variant is priced at 697 million rupiah (RM197,213).