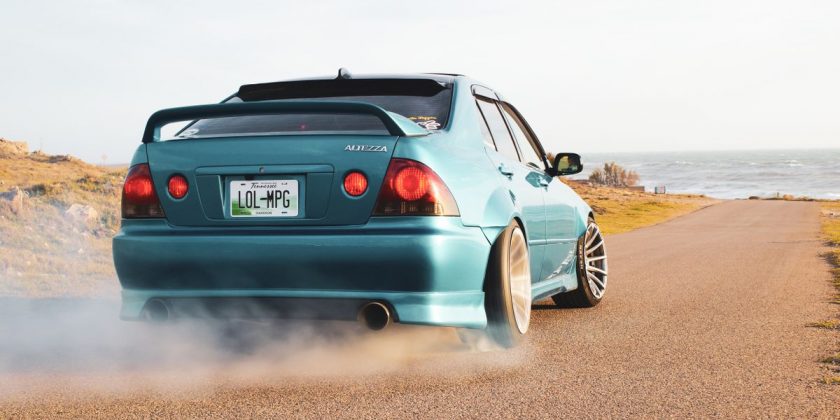 Last week, we learned that Lexus is sticking a V8 in its latest compact saloon to make the lengthily titled ‘IS 500 F Sport Performance‘. An all-new, nat-asp V8 sports saloon in 2021 is a rare and fantastic piece of news, but there’s a catch – it’s for the North American market only.

We Europeans will have to seek solace in the classifieds where we might (if we’re lucky) find one of the few IS Fs Lexus sold over here. Or we do something even more interesting: follow in the footsteps of CT reader Kevin, who’s V8-swapped an IS200.

Spain-based Kevin kept it in the Toyota family for his project, opting to fit a 4.3-litre 3UZFE from the Lexus GS430. Good for between 282bhp – 302bhp and 307lb ft of torque – 325 depending on the version you go for, the 3UZFE is a great option for the first-gen IS, particularly since its all-aluminium construction helps keep the weight down. Amusingly, Kevin reports that on a motorway cruise, he actually gets better fuel economy than he did with the original 1GFE inline-six.

It’s a relatively straightforward swap, too. The V8 sits on OEM engine mounts and goes in with only a slight widening of the transmission tunnel and some modifications to the exhaust manifold flanges. Power goes to the rear through a five-speed automatic gearbox, a modified prop shaft and a limited-slip differential.

The dual exhaust system runs straight from the manifolds to a pair of custom Cherrybomb resonators, with the option to divert to some additional silencers via a set of valves when a more subtle note is wanted.

It sits on a new set of coilovers, with the chassis further spruced up through the fitting of adjustable camber arms and a homemade front big brake kit. The latter element is perhaps the quirkiest bit of the whole build, consisting of Mercedes W220 S-Class Brembo calipers (powder coated yellow, natch) and 345mm discs pinched from a W163 ML55.

The 2001 IS has been treaded to various TRD parts, a custom-made steel widebody kit, and a Vauxhall/Opel Astra OPC/VXR rear wing “because why not,” Kevin says. It’s been given a set of deep-dished Ultralite RSZ Shogun 18-inch wheels and finished BMW’s Atlantis Blue. Toyota Altezza badging inside and out completes the look of a car.

Perhaps this Lexus’ greatest success is the way it so neatly blends parts borrowed from other Toyota products with unexpected additions from elsewhere. There are more developments on that front too, with Kevin currently eying up a Ford SVT supercharger kit, of all things. A manual gearbox transplant is also on the cards.

We’re no strangers to the potential of the IS200, having overhauled one into a track weapon a few years ago. Our project and Kevin’s show that there are multiple routes to go with the Lexus saloon, even if the IS perhaps isn’t the most obvious starting point for a build. Kevin, consider our hats well and truly doffed.

Want to you your car featured on CT? Email us some images and details now! We’ve had a staggering amount of submissions just days on from opening up this inbox, though, so do bear in mind that we won’t be able to cover everything awesome that comes our way.

All images on this page via Kevin