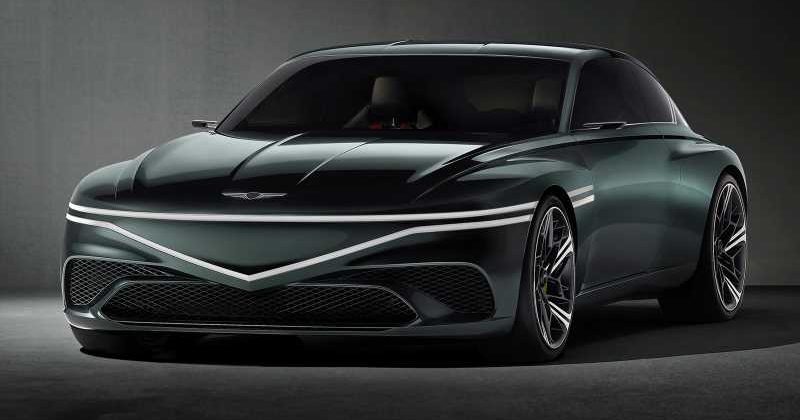 Genesis has been on a roll lately. It just introduced its first EV, the Genesis GV60 crossover, and its GV70 SUV recently won MotorTrend‘s SUV of the Year award. The hot streak continues this week, with the unveiling of the all-new Genesis X Speedium concept car, which aims to position the brand’s performance and style intentions for future EVs without pigeonholing the brand into a one-size-fits-all design approach.

Genesis refers to the Speedium concept as a “freestyle design study” drawn up from a team led by chief creative officer Luc Donckerwolke, and we don’t really think the brand has any serious intentions of putting this specific car into production anytime soon. Instead, it’s a fun exercise to explore where the brand wants to position its new electric vehicle offerings, never straying too far from a race track, while continuing to evolve the premium quality Genesis also strives for.

“This car is an open-door moment in Genesis’ journey towards our future EV design,” said Donckerwolke. “This isn’t a show car — it’s a look into our design processes as we explore ideas for the next wave of EVs, one that incorporates Genesis’ DNA.”

The car is said to preview a new lineup of six BEVs to be introduced by 2030. Genesis representatives say the Speedium will inform each new design without a one-size-fits-all approach. “We don’t want to make matryoshka dolls,” Donckerwolke quipped, referencing the Russian doll sets that can fit inside one another.

The design is described as “anti-wedge,” with a “parabolic” shoulder line running from the front to the rear and a dual headlight signature that forms an outline of a shield-shape fascia. The dual-light signature continues with the brake lights that break up a complex combination of convex and concave surfaces, with the tip of the trunk-lid illuminated as a third brake light. The car is finished in a Inje Green paint color, which Genesis says is named after the mountainous Inje Speedium race track in Korea that inspired the vehicle and design.

“It’s not about making the design elements compete with each other, but about orchestrating the elements so that they complement and respect one another,” Donckerwolke added.

At the Speedium Concept’s reveal event in New York, Genesis also announced its next EV, the upcoming electrified GV70, will be the first model produced in the U.S. at the company’s Montgomery, Alabama plant. The automaker also donated $50,000 to Girls Who Code to “change the image of what a programmer looks like and does,” as part of the company’s “Genesis Gives” campaign to support new initiatives in science, technology, engineering, arts, and mathematics.