Scotty Stites has the high cost of racing beat with this 8-second budget bomber.

Getting involved in the sport of drag racing usually isn’t a wise financial decision. It costs money to build (or buy) the car, and then it’s an endless money pit with maintenance, repairs, and general expenses of racing such as entry fees, fuel, and race track cheeseburgers. But if there was ever a car that perfectly exemplifies budget-friendly drag racing, it’s this 1981 Chevy Malibu owned by 39-year-old Scotty Stites of Ripley, Mississippi. The car is all business, from its satin blue DIY Plasti Dip paint job to its naturally aspirated small-block engine, but the car’s simplicity doesn’t mean it’s slow. In fact, the car runs quicker than the roll cage specifications allow, but the tech guy at his local track doesn’t seem to mind. 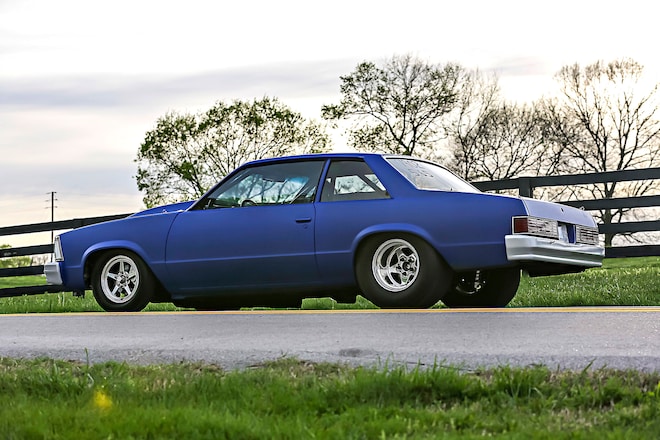 Scotty bracket races the car, running in the Super Pro division against tube chassis cars and dragsters. Despite the weight and horsepower disadvantage, the car is consistent and performs well on a regular basis. Scotty also runs in the local 6.0-second eighth-mile index class, which is specifically for door slammers, but the field is typically packed with lightweight, tube-chassis cars. Nothing pleases Scotty more than to put those high dollar cars on the trailer. 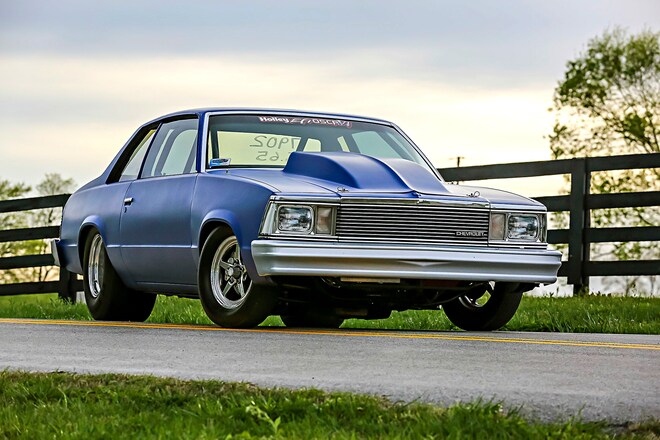 Scotty bought the car from a friend who had started the project several years ago. The previous owner had built a new back half, consisting of narrowed rear frame rails, big wheel tubs, and a narrowed rearend. Scotty got a great deal on the car, and started troubleshooting some of its issues. He tracked down a few problems in the driveline, and made quick progress to get the car running better. 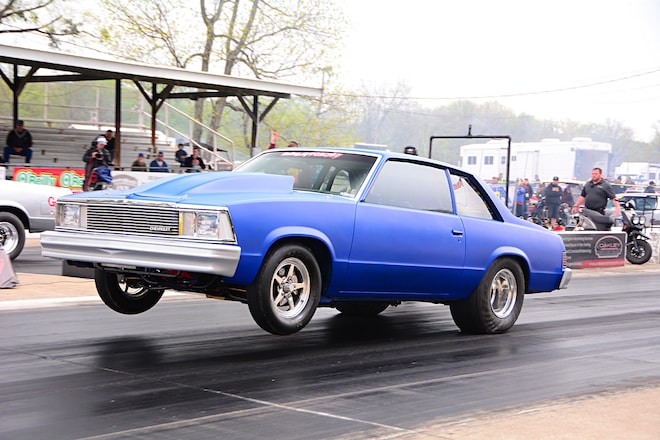 The car’s exterior—a non-descript flat blue—came out of a spray can, and is arguably the Malibu’s most memorable feature. “This was just a cheap option,” says Scotty. “I had checked into some vinyl wraps, and a guy was supposed to come wrap it, then he never showed up. We figured out something cheap, and it just worked out, you know, for less than $500 you can do the whole car. It’s just a flat color, there’s no shine to it, but it works.” 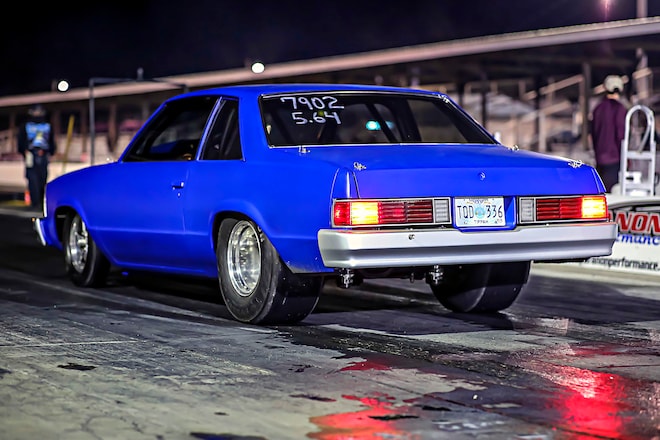 While Scotty’s Malibu spends 100 percent of its time on the racetrack running deep into the 5s in the eighth mile (approximately high 8s in the quarter), the bracket machine is not particularly stripped-down for the track. All the lights and accessories work, and the full interior (sans passenger seating) could easily be returned to street duty in a day’s time, should the need arise. “It’s got steel doors and roll-up windows. It’s nothin’ fancy, but it works for me.” 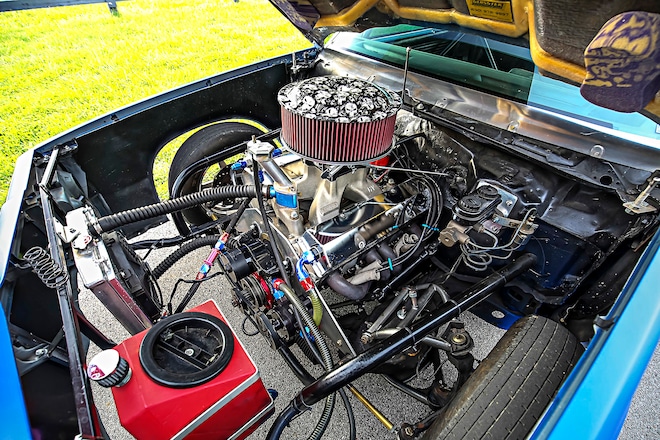 Scotty reports he has only about $15k in the car, and much of that is due to the simple combination under the hood. Keeping the cost of racing down is a 434ci small-block Chevy with conventional 23-degree heads, a 950cfm alcohol carburetor, and 12:1 pistons. “It’s nothin’ exotic. It’s got 20-year-old parts, but it’s a good combination that makes good power.” Running methanol fuel, Scotty reports a best eighth-mile e.t. of 5.53 at 120 mph. “I bought it with this engine, but it didn’t run very well. I changed a bunch of stuff, took weight off here and there, and got it faster and faster just tinkering with it. It’s about maxed out now. To go any faster, we’ll have to spend about $5,000.” 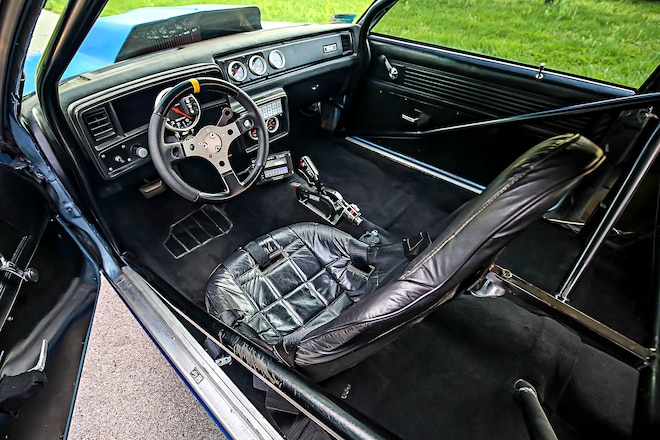 Scotty has a great support system at home, thanks to his wife Sharon and his 16-year-old son Caden, who can often be seen helping out in the shop and at the track. He also received a helping hand from his brother-in-law Jason Hutcheson—not only is Jason his employer (Hutcheson Transmission; Ripley, Mississippi), but he also helps on the race car, so that’s a win-win. 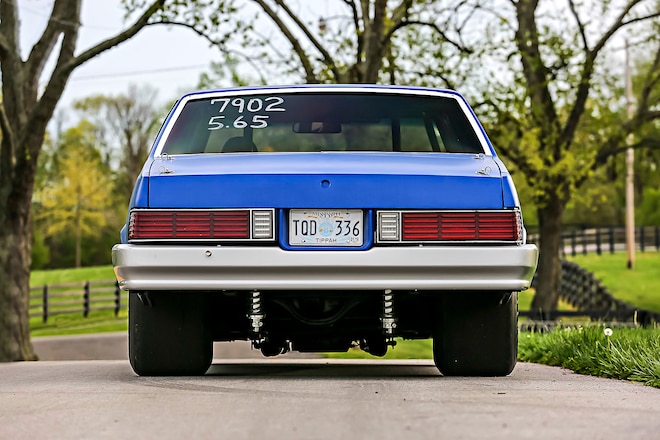 We met Scotty at the Outlaw Street Car Reunion in Bowling Green, Kentucky, where he was competing in the 32-car Super Pro Shootout. Scotty made it to the semi-finals on Friday night, before his opponent ran dead on the dial in with a .001 reaction time—an unbeatable run. Scotty would get another chance to race the following day, but rain moved in and cancelled the event all together, so Scotty, Caden, and Jason made the five-hour trip back home. He plans to race as often as his schedule allows, both at his home track Holly Springs Motorsports Park, and at other tracks in the Southeast. With a background in hot rods and drag cars, Scotty is right at home in the driver’s seat of his wheelstanding G-body. The car has run a best of 5.53 at 120 miles per hour in the eighth-mile, which comes out to 8.60s in the quarter mile if the car was geared differently. Since Scotty’s local tracks are mostly eighth-mile, he has it geared accordingly (4.71:1), so it uses every ounce of horsepower as it goes through the lights. Scotty admits that the car is lighter than it looks, but that it still has all of the original glass in it and plenty of room to shed some more weight if he chooses to take it to the next level. We wouldn’t change a thing because his simple combination offers big time fun on a working man’s budget. 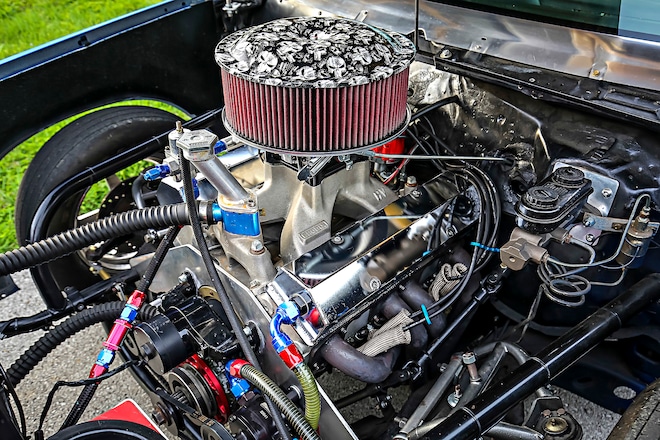 Engine
This conventional small-block Chevy starts with a Dart SHP block machined by Barnes Racing Engines to accept a four-inch stroke. The Eagle 4340 crankshaft is mated with Eagle six-inch H-beam connecting rods, and slings a set of Ross pistons. With a hefty dome on the piston, the final compression ratio is 12.0:1, when combined with the Brodix 10X aluminum cylinder heads. The extensively worked heads were previously used on a sprint car engine, and feature 2.150-inch titanium intake valves and 1.600-inch stainless exhaust valves. The camshaft is a Comp Cams solid-roller with a custom grind, featuring 274 degrees intake and 286 degrees exhaust duration at .050-inch lift, and a max lift of .753-inch on the intake side and .721-inch on the exhaust. Other Comp Cams components include a belt drive, 1.550-inch valve springs, and pushrods. The valve train is finished off with a set of Jesel shaft-mounted rocker arms with a 1.6:1 ratio. Engine electronics are handled by an MSD 7531 box, accompanied by an MSD Pro-Billet distributor, coil, and flying-magnet crank trigger. The car’s exhaust consists of Hedman headers (1.875-inch primary tubes) leading to 3.5-inch pipes and Dynomax bullet mufflers. 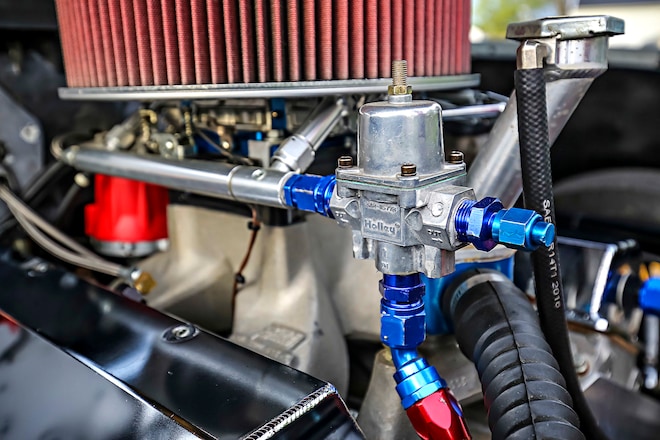 Induction
Atop the small-block is a Brodix single-plane intake manifold, which features a 4150 flange. The carburetor is a Quick Fuel 950cfm unit, set up for methanol. It draws fuel from a Magnafuel 275 pump. 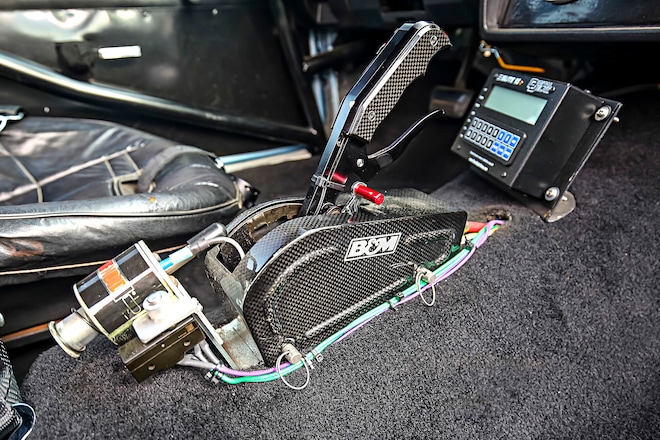 Transmission
Since Scotty spends his days building transmissions, he jumped at the chance to modify the Powerglide in his Malibu. Along with all new hard parts, he installed a BTE valve body with a Pro Brake. The custom eight-inch torque converter stalls to 6,000 rpm on the line. A Wiles Racing aluminum driveshaft handles the shock of the high-rpm launch. 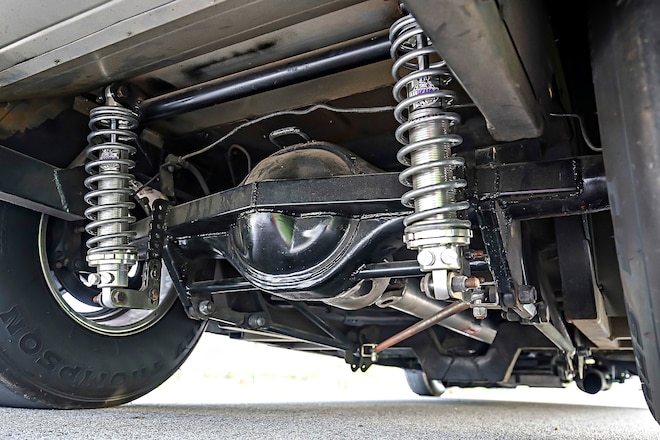 Rearend
Out back is a Quick Performance 9-inch rear end. It features an aluminum center section, packed with a 4.71:1 Motive ring and pinion, a spool and Moser 35-spline axles. Scotty’s specialty is reducing mass in the rotating assembly (he’s a transmission expert, after all!), so he got to work relieving the ring gear mass around the attachment points using a Bridgeport machine. 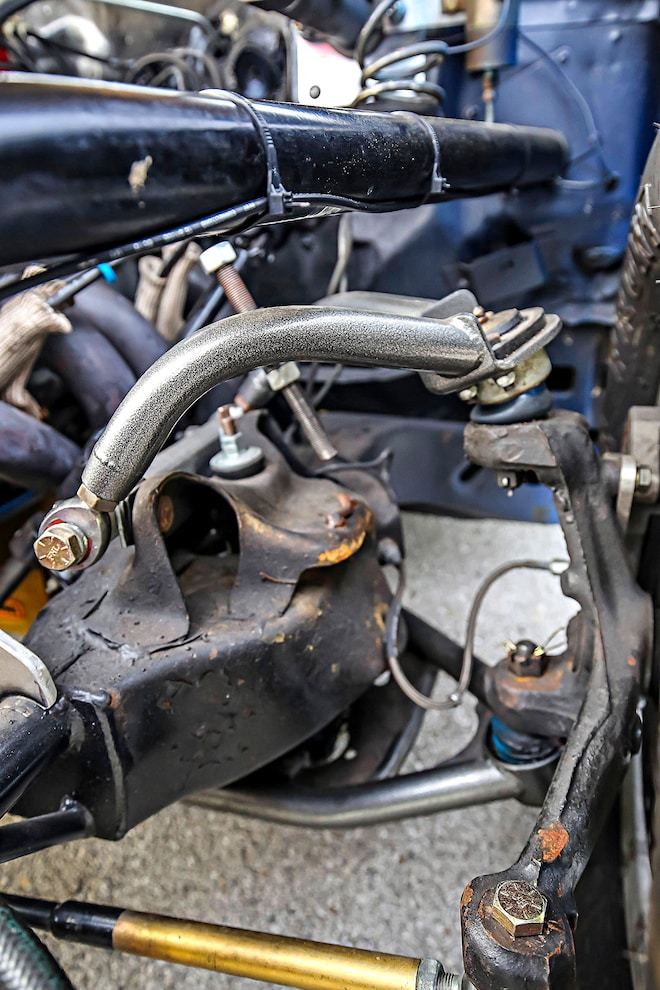 Suspension
The previous owner replaced the rear frame rails with 2×3 rectangular tubing, and installed a Competition Engineering ladder bar suspension. Scotty tweaked the suspension to his liking, and has the Viking double-adjustable coilovers dialed in. The front suspension features QA1 R-series coilovers with 250-pound springs. A rack and pinion was added by Laverne Ferrovillat at 5th Avenue Race Cars in Mobile, Alabama. Braking consists of Aerospace Components front discs and Wilwood rear discs. 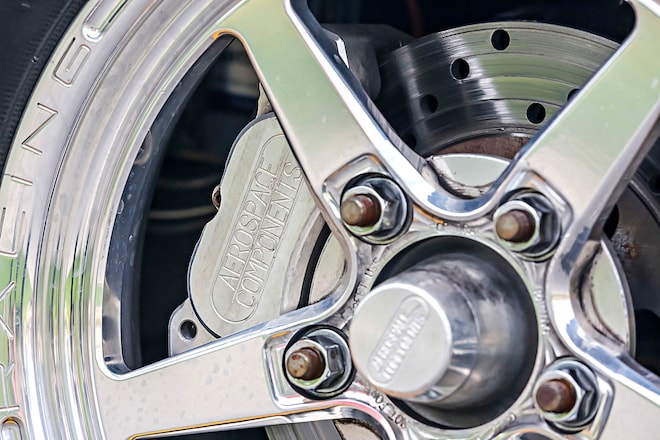 Wheels & Tires
The Malibu rolls on Weld Alumastar front runners, which measure 15×3.5 inches and mount to a set of Mickey Thompson 26×4.5-15 tires. Out back is a set of Billet Specialties 15x12s, mounted to Mickey Thompson 315/60R15 Pro drag radials. 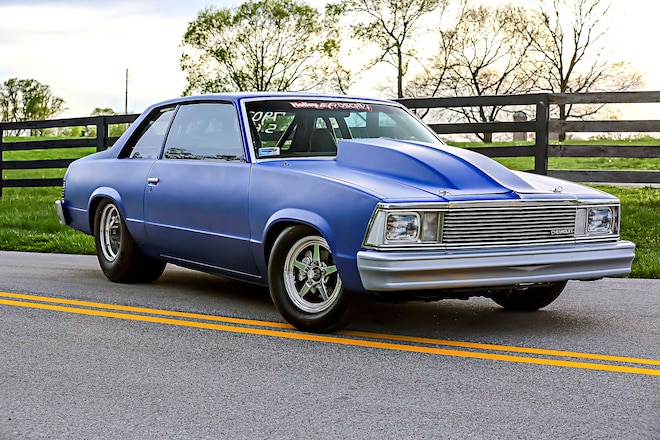 Body/Paint
The body on Scotty’s Malibu is mostly stock, aside from the Glasstek four-inch cowl induction hood. Scotty straightened up the body and gave it a satin blue finish using low-cost blue Plasti Dip. 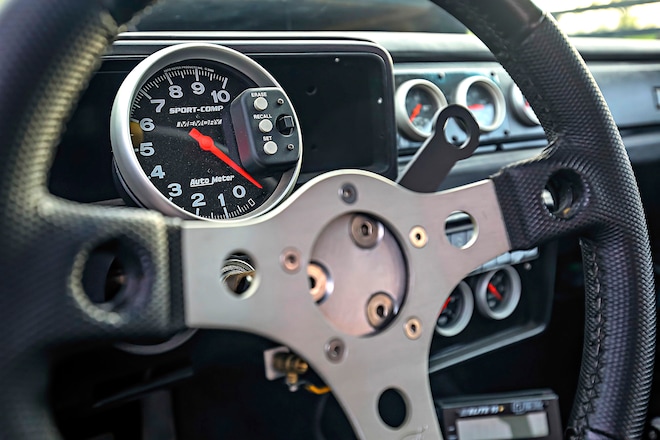 Interior
It’s a pretty basic setup inside the Malibu, but it serves the purpose. Scotty says, “Aluminum interior panels and Lexan windows are great for weight savings, but I hate that stuff.” He loves the fact that he can still roll the window down on the return road to get some fresh air during those hot Mississippi summers. Scotty is surrounded by a 12-point mild steel roll cage, and hangs on to a Grant steering wheel and B&M Pro Stick shifter. He’s strapped into a Jegs racing seat, using an RJS cam-lock harness.