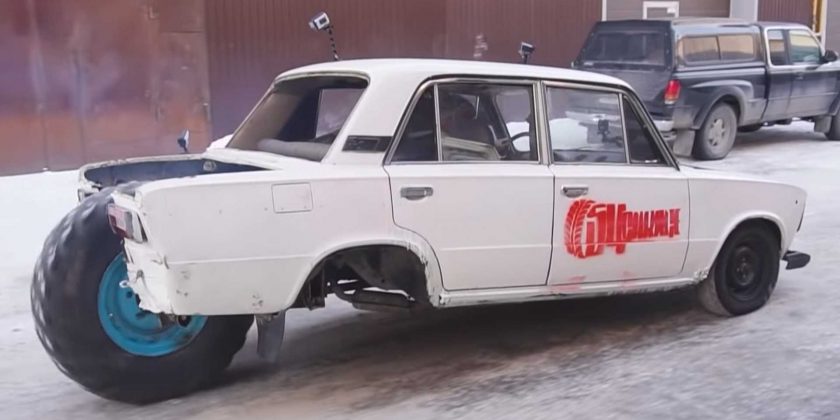 When the snow starts to fall in Russia, Ladas get scared. That’s because the Garage 54 crew saves the craziest automotive experiments for winter, and does it get much crazier than a three-wheeled car? Actually, there was the Lada 6×6, and the Lada with 14 wheels, and the Lada with freaking legs so yes, it gets crazier. But we suspect none of those were as fun to drive as this three-wheeler.

Why is that? As you can see, this build didn’t simply replace two Lada wheels at the back with one. Instead, it gets a ginormous wheel and off-road tire that requires much of the car’s boot to be cut away. The wheel is so large that a special three-differential setup was created to make sure the gearing was low enough for the engine to handle. That also means the driveshaft is custom-made, the axles are custom-made, and the suspension is custom as well. By that, we mean there is no suspension. Yikes.

Actually, that’s not the yikes moment in the video. That comes when the car is fired up on the lift and we see a rather alarming wobble from the wheel that gets worse at higher speeds. Of course, with all the gear reductions in place, the top speed on this Lada isn’t exactly brisk. It still makes for a sketchy-looking build, especially with no rear suspension and a rather aggressive rake angle when on the ground. By comparison, a Reliant Robin looks positively comfy.

And yet, it actually goes pretty darned good! The tire is so large and heavy-duty that it doesn’t need air to support the Lada’s lightened backside. That means it’s spongy, and it gives the Lada a surprisingly comfortable ride considering there’s no rear suspension. However, the height also means it has a bit of body roll, but it still seems relatively stable even on rough terrain. Honestly, it looks like terrific fun, and as for that wheel wobble? Not an issue at the Lada’s slow speed.

If this is how Garage 54 kicks off winter, we can’t wait to see what comes next.