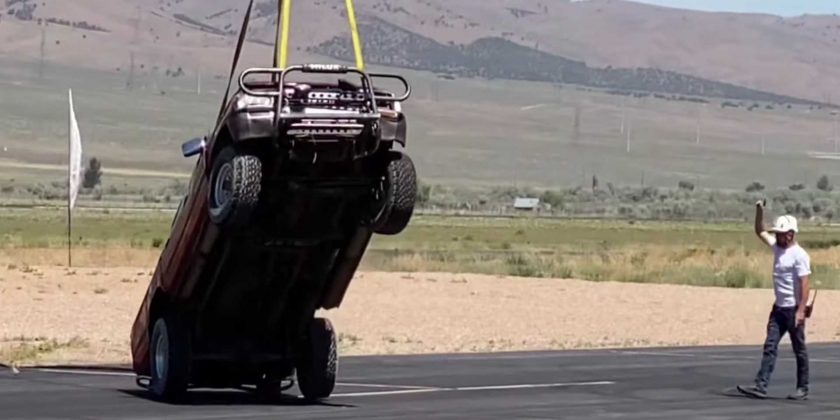 It ends up flat as a pancake

Top Gear famously abused a Toyota Hilux to prove the pickup’s impressive strength against abuse. The stunts included putting it on top of a 200-foot-tall building while the structure was being demolished. WhistlinDiesel on YouTube has been putting the truck through even tougher tests, and it culminated with dropping the Toyota from 10,000 feet.

Things start easy. The team hooks the Hilux to a Kaman K-Max heavy-lift helicopter, and the chopper takes it up to just 500 feet for the first drop. The truck lands hood-first, and the result looks nasty. The wheels are now far closer together than they should be, suggesting the frame is broken.

Unfortunately, there’s no chance to check whether the engine still runs because renting the choppers for this stunt allegedly costs $100,000 per minute, according to the video. The team hooks the truck to the helicopter again, and the pilot starts ascending to 10,000 feet.

The K-Max has no room for passengers, so the WhistlinDiesel crew is filming from another helicopter. However, it can’t go as high unless the guys open the doors, but a crew member refuses to take the windy ride.

The Toyota drops and then begins spinning in a manner that’s not too dissimilar from a helicopter blade. The GoPro camera mounted in the truck stops recording, but the view is already becoming a blur as the pickup rotates faster and faster.

From the helicopter releasing it, the pickup takes 29 seconds to fall to the ground. The aftermath is amazing. The truck is basically a pancake. It’s shocking how flat the vehicle is after colliding with the earth.

WhistlinDiesel is already planning a follow-up video where the team would check to make sure whether the engine can still run. This would answer the question of how tough the Hilux really is.