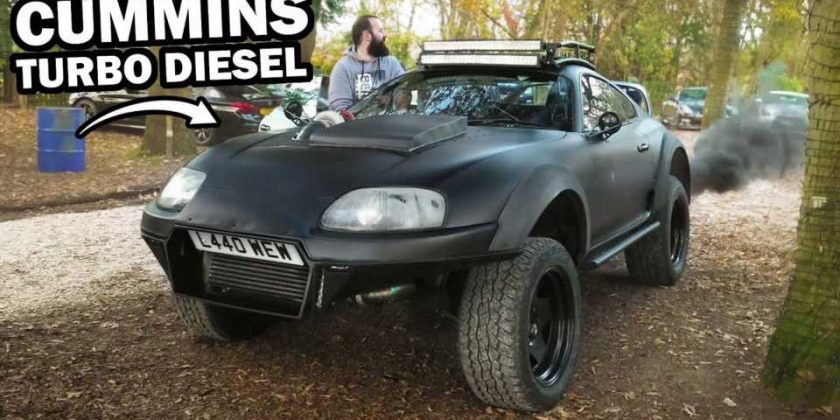 2JZ – these are three sacred letters for the hundreds of thousands of Supra fans around the world. The inline-six engine from the 1990s was probably one of Toyota’s greatest hits of all times, and seeing modern Supra with 2JZ swaps (see the related links below) should be proof enough of that claim. But please, folks, be tolerant of the build you are about to read for and see on camera.

During the years of writing thousands of automotive articles, we’ve seen many engine swaps but we’ve never seen anything like this. What we have here is a heavily modified Toyota Supra from the fourth generation of the sports car equipped with a tank-sourced diesel Cummins engine. Yes, you read that last sentence right.

From what we are able to see, the main idea here was probably building a capable adventure vehicle based on a Supra. The car sits much higher compared to a stock model and rides on large off-road tires, hiding under wider wheel arches. There’s also a roof rack and this is probably one of the very few Supras in the world that have a tow bar. The entire body is finished in matte black.

Unfortunately, we don’t know much about the engine’s specifications, though you can easily see there’s a massive turbocharger that’s sticking out of the hood. At some point, we get to hear the inline-six Cummins diesel running, and it sounds indeed like a tank. One other surprise is that this Supra actually rides on air suspension with the normal driving height being much lower than the off-road setup.

All in all, this is one awesome and truly unique project. Sure, not everyone likes his Supra turned into an off-roader, but for those who appreciate special ideas and builds, this will probably be very interesting for you.