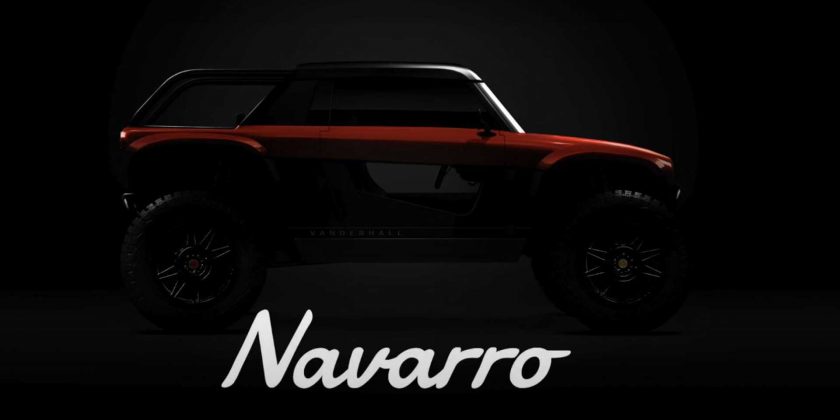 Vanderhall is known for its three-wheelers, but for its next project it’s adding one wheel and going off-road.

Vanderhall pokes fun at itself in the announcement video for its latest project, a four-wheeled all-electric off-roader called the Navarro. It amusingly begins by announcing that an off-road version of the three-wheeled Venice… is not what the video is about.

Then a wall falls on top of it and then what we presume is a prototype of the Navarro drives over the wreckage. It’s a pretty cool way to promote a new vehicle and we can’t wait to learn more.

You can clearly see the Navarro is designed by the same people who penned the Venice, yet the off-roader just adds a touch of ruggedness that the three-wheeler didn’t have. It too has headlights covered by a grille, giving it a 1980s retro vibe that really works in this context.

Absolutely nothing is mentioned about the powertrain or the battery pack, and we expect it to be more powerful than Vanderhall’s first electric vehicle, the Edison 2, which has 140 horsepower and 315 Nm (232 pound-feet) of torque (courtesy of two electric motors) and draws from a 28.8 kWh battery pack.

Until we have additional information on the Vanderhall Navarro, check out the teaser video and the limited selection of photos provided by the company. The vehicle is expected to debut for the 2022 model year, although we expect to find out more about it beforehand.