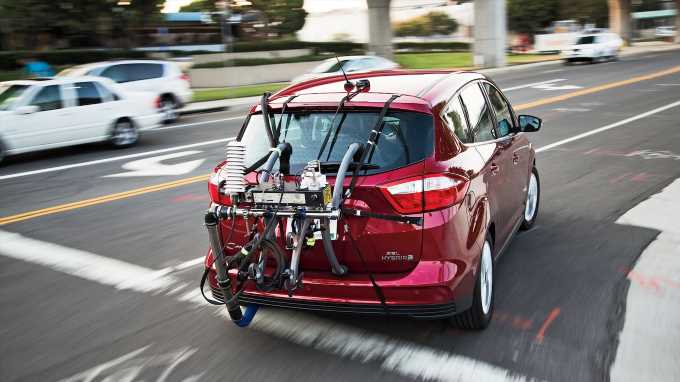 MotorTrend in 2012 teamed with the world’s preeminent real-world on-road emissions testing company—U.K.-based Emissions Analytics—and began emissions-testing many vehicles that pass through our revolving test fleet. Our prime motivation was to measure real-world fuel economy, which we’ve reported in many of our vehicle evaluations as Real MPG. But because Emissions Analytics’ proprietary EQUA testing procedure is functionally similar to the EPA’s (which determines fuel economy by capturing and analyzing the products of combustion), it would also reveal any cheating on other controlled emissions.

It’s report card time: How “clean” is the U.S. fleet, judged by our own EQUA measurements?

Of the 817 vehicles tested, none demonstrated a whiff of Volkswagen Dieselgate-style noncompliance in terms of regulated air pollutants from the tailpipe. Nitrogen oxides (NOx) emissions from the gasoline vehicles tested an average of 0.023 g/mile—less than half the regulatory limit for cars (0.050 g/mile). Even light- and medium-duty diesels from the last five years average just 0.036 g/mile. Looking at carbon monoxide (CO), gasoline and diesel vehicles emit just 0.267 g/mile and 0.228 g/mile, respectively, compared to a regulated limit of 1.700 g/mile. Put simply, modern regulations have driven powertrain technologies that have slashed the amount of these pollutants expelled into the air.

Carbon dioxide (CO2), however, remains a problem. In fact, since 2012, averaging all gasoline and all diesel vehicles, CO2 has not improved at all for either fuel type. What has changed is the growth in the full-hybrid market. Hybrids with electric motors large enough to contribute meaningfully to propulsion are significantly more efficient than those without, so they emit less CO2. The reason: CO2 and mpg are closely linked—the higher your mpg, the lower your CO2 emissions for any given fuel. So, broadly, if you are saving fuel, you are also saving the planet.

In fact, the fuel economy improvements are dramatic in most vehicle segments, as shown in the chart below. Even as trucks and SUVs over the years replaced diesel cars, diesel variants delivered a 25 percent mpg boost, averaged over all the vehicles we tested since 2012. Hybrids, however, doubled this: a 48 percent increase. This equates to a one-third reduction in CO2. Some segments, such as compact, midsize, and large sedans, delivered even bigger rises, with larger SUVs and pickups bringing down the overall average.

CAPTION FOR ABOVE CHART: Of all the vehicles Emissions Analytics tested, the top 10 most efficient were all gasoline hybrids, led by the Hyundai Ioniq at a whopping 59.1 mpg. Excluded from these are plug-in hybrids, as their performance depends greatly on how often they are charged and how far they travel between recharges.

CAPTION FOR ABOVE CHART: At the other extreme, the lowest mpg returned by any of the tested vehicles was courtesy of the 7.3-liter Ford F-250, at 11.8 mpg.

The increasingly popular SUV segments sit somewhere in the middle of the efficiency spectrum, with small gasoline SUVs averaging 24.1 mpg, while standard gasoline SUVs only achieve 19.8 mpg. Over time, however, gasoline SUV mileage has improved—and done so quicker than the market overall, as shown in the chart below. Engine efficiency improvements have helped SUV mileage rise by an average of 0.7 mpg per year over the testing period, compared to market rises of 0.2 mpg.

Despite these improvements, total CO2 emissions from the U.S. fleet remain huge. Gasoline vehicles overall emit 388 g/mile. (There is no separate CO2 limit, just corporate-average fuel-economy limits.) With around 300 million light-duty vehicles on America’s roads, if they average 10,000 miles per year, we’re spitting out almost 1.2 billion tons of CO2 every 365 days. Since the start of our Real MPG program, this equates to more than 11 billion tons.

Electrics to the Rescue?

Emissions Analytics tested seven battery electric vehicles ranging from the Chevrolet Bolt to the Porsche Taycan—along the same on-road EQUA test route. On average they delivered 3.0 miles per kilowatt-hour of electrical energy (miles/kWh). Using the EPA’s conversion method, this equates to 101 miles per gallon-equivalent (mpg-e). Conscious of the limitations of this method, that figure is still four times more than the 25.6 mpg average of all EQUA combustion-engine vehicles tested.

Among the BEVs tested, the most energy-efficient were the Hyundai Ioniq EV (4.5 miles/kWh) and Chevrolet Bolt (3.7 miles/kWh). Bottom of the league were the Audi E-Tron (2.1 miles/kWh) and Porsche Taycan (2.2 miles/kWh), with the Tesla Model S (3.0 miles/kWh) and Model 3 (3.1 miles/kWh) ranked in between. Therefore, the best in class were about twice as efficient as the worst. For comparison, of the two fuel-cell electric vehicles tested, the average mpg-e was 63.2, 37 percent less than BEV average on the energy-equivalent basis.

But as these vehicles don’t have a tailpipe, surely this means they emit no CO2? Correct, they do not—at least not from a traditional exhaust. But what about in the electricity production and vehicle manufacture?

Producing the large batteries used in BEVs generates significant amounts of CO2, which somewhat offsets the lower CO2 produced by generating the electricity used to power the vehicle. Presuming a 130,000-mile lifetime mileage of a 36-kWh battery, a BEV’s manufacture may generate the equivalent of 80 g/mile of CO2, compared to around 45 g/mile for a traditional internal combustion engine. Add to that the CO2 used while producing the electricity, assuming the current mix of how electricity is produced for the grid between fossil fuel and renewable sources, and the total is 150g/mile. This is a 61 percent improvement over today’s conventional gasoline vehicles and 37 percent better than non-plug-in gasoline hybrids—as shown in the table below.

CAPTION FOR ABOVE CHART: The upshot of this chart is, if you buy a plug-in hybrid in hopes of saving the planet by achieving the fuel economy/CO2 figures on the label, you’ll need to drive in fully electric mode 73 percent of the time.

So, BEVs generate lower lifetime emissions, but definitely not zero. The fact is, it remains vital that we clean the electric grid and EV manufacturing processes if BEVs are to become the dominant technology. Hybrids, while less clean overall, offer a good interim step.

Before we hoist the “Mission Accomplished” banner regarding vehicle emissions, there are vehicle-pollution sources we haven’t yet touched on: Tires and brake pads will continue to produce particulate emissions even after the propulsion source becomes squeaky clean.

Measuring brake-pad emissions is in its infancy and remains highly dependent on the electricity-regeneration strategies of electrified vehicles, so we’ll ignore this pollution source for the moment and focus on tire wear emissions.

Emissions Analytics’ initial research suggests a typical vehicle’s four tires emit approximately 0.120 g/mile. The rate of wear is sensitive to driving style, especially braking and cornering. And as a tire surface heats up, the proportion of wear composed of ultrafine particles—the type that’s most injurious to human health—rises. For comparison, the typical particle-mass emissions from a modern tailpipe, whether linked to a gasoline or diesel engine, is well below 0.001 g/mile. Tires, therefore, generate about 100 times more particles in normal driving, and 1,000 times more in aggressive driving. Further, tire wear emissions increase with weight: about 20 percent more pollution for every extra 1,000 pounds of vehicle mass.

Brake and tire emissions are now on the regulatory agenda; the UNECE group under the United Nations is working on a method for testing brake emissions. Work on measuring tire wear is at an earlier stage, but Emissions Analytics has already developed a method and begun testing. Crucial to comprehending tires’ impact is not just a simple wear rate: The tires’ chemical composition must be understood. The majority of the material is derived from crude oil, not the “wholesome” natural rubber eked from trees. Some compounds in tires may be carcinogenic, so this should be a priority for new testing and regulation. Manufacturers are developing new tire formulations that may contain fewer polluting compounds and that wear at reduced rates, but the latter characteristic must always be balanced against wet-weather grip, rolling resistance, and noise.

Emissions Analytics continues its test programs in the U.S., the U.K., Europe, and Korea. It says it is committed to building the definitive vehicle environmental-impact database so consumers, policy makers, and manufacturers can make sound decisions informed by modern real-world testing and not only by computer projections and antiquated lab tests. Good health, a clean environment, and saving money are the aim. For further details, visit emissionsanalytics.com.

How Well Does Your Car Filter the Air Coming In?

Most people today are well aware of the air-pollution discussion, but it’s far rarer to hear anyone talk about air quality inside their cars. Yet closing the doors and switching on air conditioning does not provide a protective seal in the way you might think.

Emissions Analytics tested 100 recent cars in the U.S.; it measured the proportion of particles in the outside air that infiltrated the cabin through the ventilation system and any installed filters. It also measured CO2 buildup inside when the climate-control system’s air-recirculation mode was engaged; inhalation of particles is known to correlate with negative health effects, including cancer. CO2 inhalation can also lead to reduced cognitive performance and, therefore, worse driver comfort and increased crash risk.

The average internal concentration of particles—as measured by the number of particles above 15 nanometers in size—was exactly the same as outside, but the worst car (a 2019 Lexus ES300h) was 354 percent more polluted inside, while the best (a 2019 Honda Civic Type R) was 73 percent less polluted inside. This directly reflects air-filter effectiveness and the ventilation system’s setup. For CO2 buildup with air-recirculation mode engaged, the best vehicle saw no increase at all, whereas the worst vehicle saw the levels more than triple to in excess of 1,000 parts per million compared to the start of the test. And this was with only a driver on board for just more than 30 minutes.

Note: No Tesla “biohazard-proof” systems have been tested.