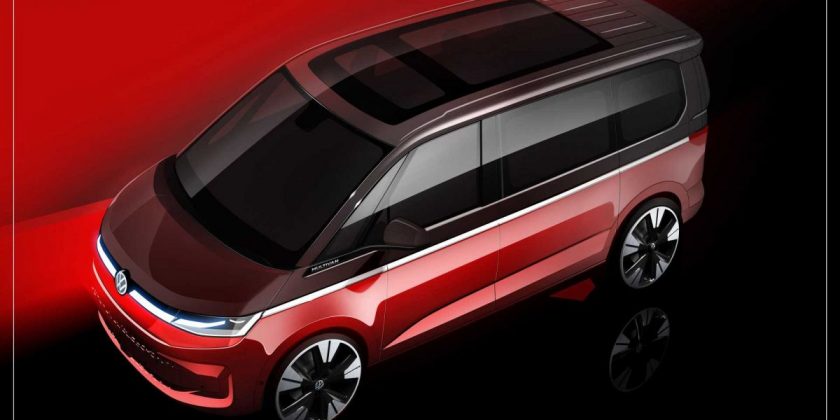 Volkswagen has revealed visual renderings of the upcoming T7 Multivan, which is going to be an all-new iteration at the people-mover now migrates to the MQB platform that underpins the Volkswagen Group’s transverse-engined cars. This will also see the new Multivan sport a longer wheelbase as well as wider tracks compared to the outgoing T6.1, in order to liberate more interior space.

The new sketches reveal an additional window within the A-pillar to improve visibility, as on the T1-generation model, while its character line runs the full length of the vehicle, as employed on the T3. The angle of the windscreen that blends into the bonnet line is reminiscent of the T4. Moving inside, the new Multivan will draw from the eighth-generation Golf for its interior design cues, and the people mover will employ a small selector for its shift-by-wire transmission alongside the 10-inch infotainment screen; this means there will not be a provision for a manual gearbox and traditional parking brake lever in order to free up additional space between the front seats.

Located where a centre console would be, a built-in table resides on tracks in order to enable sliding back and forth, which frees up space for front occupants to move easily to the rear seats, and vice versa. The rear seats will now be individual perches in the T7 as it becomes more passenger-oriented.

The more utilitarian roles will be served by the T6.1 Transporter, which will continue to be sold alongside the T7. Powertrain is likely to be a plug-in hybrid setup, and this is likely to be a version of the powertrain used in models such as the Golf GTE. The upcoming Volkswagen Multivan is expected to debut in June.