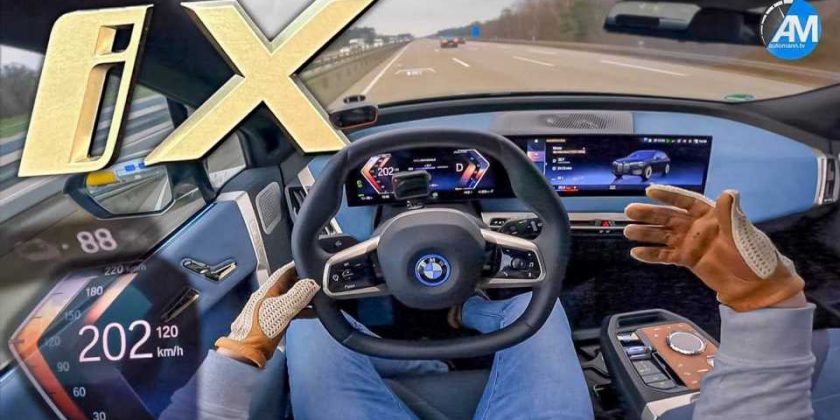 BMW iX may not look particularly aerodynamic, but the manufacturer says it has a really low drag coefficient of just 0.26. The most powerful version is the xDrive M50 model with a combined power output of 523 PS / 515 bhp and a peak torque rating of 765 Nm / 564 lb-ft, allowing it to sprint to 100 km/h in 4.6 seconds.

Top speed is electronically limited to 200 km/h / 124 mph and with that much power on tap, the iX has no trouble quickly reaching it. This becomes immediately obvious in this video posted by Automann-TV whose aim is to find out how much range the iX has when it is driven at autobahn speeds – the host says he tried to maintain 160 km/h / 99 mph, although that was not always possible.

The iX M50 has a 111.5 kWh battery pack with a usable capacity of 105.2 kWh that gives it a claimed WLTP range of 549 km. Automann-TV tested the iX in winter, with temperatures barely above freezing, so even if he tried to drive it efficiently, he could not hope to match the claimed number.

He drives the vehicle until it has around 25 percent left in the battery, when he pulls in to charge the vehicle and draw conclusions. The iX is deemed a great highway EV, one that you can really drive as you would a normal vehicle on the German autobahn.

The video’s host estimates that the vehicle should be capable of providing up to 300 km / 186 miles of range driven quickly on the autobahn in winter with very low temperatures. At the end of the journey, he also performs a charging test at an Ionity station, and the vehicle quickly ramps up to 195 kW with 19 percent left in the battery; he was able to charge it to 80 percent in just over 30 minutes.