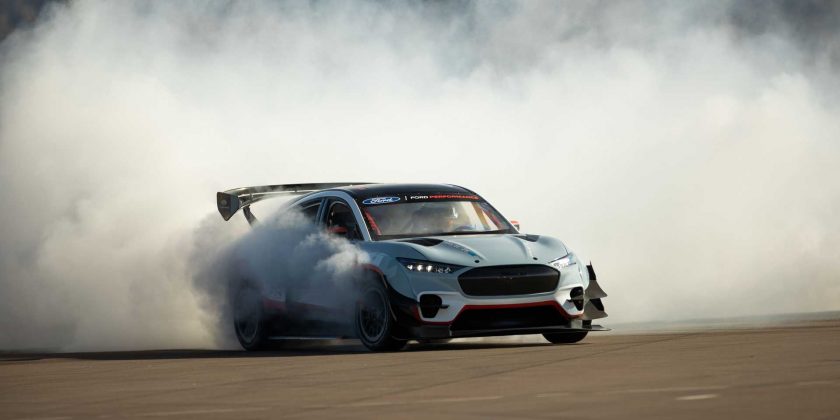 Block gets a taste and wants more.

When professional rally driver Ken Block got had the opportunity to drive the Mustang Mach-E at the vehicle launch event last year, he was a little disappointed (to say the least) that he couldn’t give it a proper thrashing, or “hooning” as he calls it.

That was because there were only three Mustang Mach-Es in existence at the time, and Ford needed to make sure they weren’t abused too much so they could be used for planned events. It took Block eight months, but he got his wish and with a bonus. Not only would he get some track time with a Mustang Mach-E, but he’d get to drive the 1400 horsepower, RTR one-off version that was just introduced this week.

The badass Mustang Mach-E 144 has seven motors that allow the vehicle to offer slightly more than 1,400 horsepower, similar to the all-electric Mustang Cobra Jet. While the vehicle was made to showcase the possibilities of what Ford and RTR can do with electrification, Ford says the Mach-E 1400 can be used for multiple motorsports situations, although the 160 mph top speed would eliminate it from being competitive in NASCAR racing where speeds of 200 mph are achieved.

As Vaughn Gittin of RTR is explaining the Mach-E 1400 to Block, he’s asked where the flux capacitor is, and he points to the center console which has high voltage wiring with a clear plexiglass cover. That was a really cool touch by RTR, as you see the thick orange cables stretch down the center of the vehicle and connected to an inverter for one of the seven motors.

Gallery: Ford Shows How Fun EVs Can Be With The Mustang Mach-E 1400

We’ve said it before but we’re really happy to see Ford doing this. Bringing electrification to Ford Motorsports will undoubtedly bring more racing enthusiasts under the EV tent. There was a considerable amount of consternation among the loyal Mustang faithful when the Mach-E was introduced with the Mustang name attached to it. It wasn’t just that it didn’t burn dead dinosaurs, but also the fact that it was a crossover and not a proper sports sedan.

However, if Ford continues to prove the Mach-E has earned the right to wear the proud pony badge with iterations like the Mach-E 1400, we think most hardcore Mustang fans will get on board eventually.