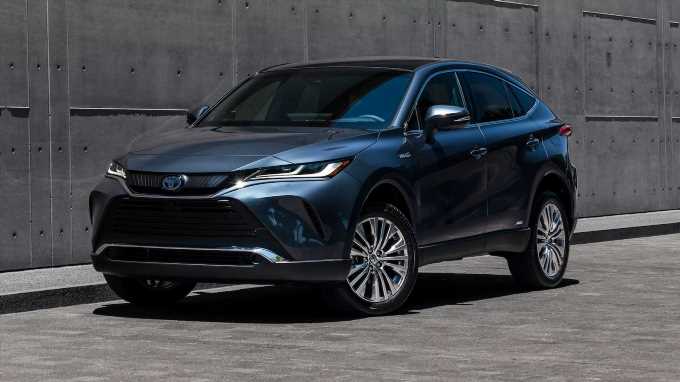 After a six-year hiatus, the Toyota Venza is back as a sleek, upscale, and well-equipped midsize SUV. The reimagined two-row sport ute seats five and slots in between the compact RAV4 and midsize Highlander in Toyota’s SUV lineup. It was also one of the finalists in our 2021 SUV of the Year competition, wowing with its design and nearly whisper-quiet cabin. If you’re looking to pick up a 2021 Venza but don’t know which one to get, keep reading for our trim review.

Across every trim, entry-level LE included, the 2021 Venza is equipped with a hybrid powertrain, CVT, and all-wheel drive. A net 219 hp comes from the joint output of a 176-hp 2.5-liter inline four-cylinder engine and three electric motors, two for the front axle and one for the rear.

Hybrid power and the Venza’s aerodynamics, which includes underbody panels, a rear spoiler, and an active grille shutter, help it achieve noteworthy fuel economy: 40/37 mpg city/highway. This is more efficient than most of the competition, which includes the Chevrolet Blazer and Honda Passport (neither has a hybrid). With a 14.5-gallon fuel tank, the Venza provides an impressive 566 miles of total driving range as well. The Passport offers a 19.5-gallon tank, but with a V-6—its sole engine option—its range is only 410 miles. The Blazer goes farther with its turbo four-cylinder, but it needs a 21.7-gallon tank, and its 521-mile range still trails the Venza’s.

Every Venza model is outfitted with premium features such as a hands-free power liftgate and side mirrors with puddle lights and an auto-folding driver’s side mirror. Common exterior features across all trim levels include dual chrome-tipped exhaust and tinted windows. In LE trim, the Venza rides on 18-inch wheels.

Even though the Venza’s cargo space is on the cramped side, the interior is still welcoming. At the LE level, the Venza’s seats are trimmed in fabric, the front-row seats are heated, and the driver’s seat is an eight-way power adjustable unit. The Venza LE also comes with a tonneau cover for its cargo area.

The base Venza LE stickers for $33,745, which is less than the Blazer AWD 2LT ($36,595) and Passport AWD Sport ($35,965), the lowest trim AWDs available for each respective model. They both make more power and offer greater cargo space than the Venza but can’t beat the Toyota’s fuel economy or collection of features. There are no add-on packages for the Venza LE, but Toyota does offer à la carte options such as premium paint and roof rack crossbars.

Toyota adds premium-feeling SofTex-trimmed bolsters to the Venza’s fabric seats, and the front seats become heated. A memory function is also added to the Venza XLE’s driver’s seat, and the XLE’s instrument display increases to 7.0 inches. Chrome accents replace the silver ones on the leather-trimmed steering wheel, woodgrain-style soft-touch armrests stand in for the LE’s black armrests, and color-matching piping with metal ends supplant the LE’s black piping. Scuff plates in the cargo area that are black in the LE become silver in the XLE, and the Venza XLE also adds illuminated interior door handles.

XLE buyers have a couple of packages to choose from. The SofTex package for $510 reskins the seats in perforated leatherette material and makes the front seats ventilated as well as heated. The Premium Audio with Dynamic Navigation and JBL package for $2,050 swaps out the half-dozen speakers for nine JBL units, takes the touchscreen size to 12.3 inches, and introduces capacitive controls to operate volume and climate. Unfortunately, we found the controls to be frustrating. Both sets of features are standard on the Venza Limited, the next level up.

The Venza XLE is priced at $37,275 without options. Its content is comparable to that of the midrange Passport EX-L, which stickers for $40,380, and the Blazer 3LT, which stickers for $40,795. Again, what’s likely reflected here is the greater power and utility of the Honda and Chevy models, but the Toyota still has a fuel economy advantage.

The Limited is at the top of the Venza range and leans toward luxury with add-ons that include a digital rearview mirror and a 360-degree camera. The driver gets a heated steering wheel, and both front-row occupants are treated to illuminated door sills. The side mirror puddle lights cast a Venza logo onto the ground.

At the Limited level, the Venza’s biggest draw might be its available auto dimming Star Gaze panoramic roof, which is a cool option for this model only and adds $1,400 to the bottom line. This feature allows drivers to change the glass from opaque to transparent with the push of a button. There’s also an Advanced Technology package for the Venza Limited. At $725, it rolls in a head-up display and rain-sensing windshield wipers.

The Venza Limited is priced at $41,075, less than the top-of-the-line Passport Elite at $45,355 and Blazer Premier at $47,245. In some respects, the Venza’s competition is still playing catch-up, even at this level. The Venza Limited’s 12.3-inch infotainment touchscreen eclipses the Blazer Premier’s 8.0-inch screen, while the Passport receives wireless device charging only at the highest trim level, Elite.

Which 2021 Toyota Venza Model Is Best?

The optional Star Gaze panoramic roof that’s only for the Venza Limited is nice, but in our minds it’s not worth it to give up easier, more reliable infotainment and climate controls. The Venza is relatively packed with content at every trim level, but the capacitive controls are unforgivably annoying. We recommend the Toyota Venza XLE and even suggest springing for the SofTex package for the premium-feeling upholstery and heated and ventilated front seats.