Mazda turned heads at the LA Auto Show this week with the new Mazda3, a strikingly-styled compact sedan and hatchback set to go on sale early in 2019. The new 3 isn’t just a daring design—it’s the first car to feature the automaker’s revolutionary Skyactiv-X engine, engineered to unlock huge improvements in fuel efficiency by burning gasoline using compression ignition under certain driving conditions.

Skyactiv-X is the key to Mazda’s future plans. The automaker believes that its “spark plug-controlled compression ignition” will allow it to keep refining and advancing the internal-combustion gasoline engine as far into the future as 2050. Mazda is betting it all on the notion that internal combustion has a long and prosperous road ahead. 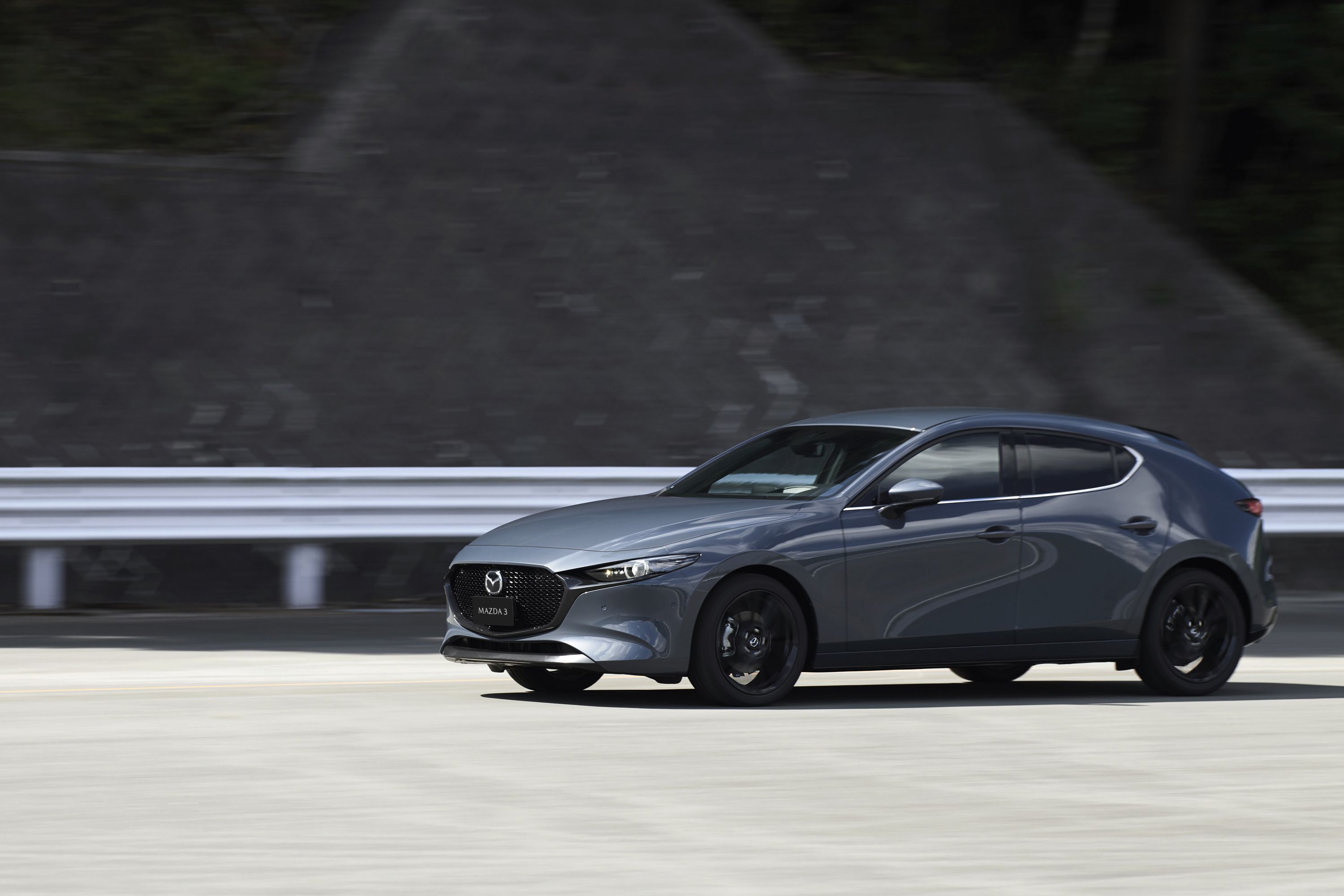 At the LA Auto Show, I sat down with Jay Chen, powertrain manager for Mazda North America, and Dave Coleman, engineering manager at Mazda NA, to talk about Skyactiv-X, and find out more about why Mazda feels so optimistic about internal combustion. Both Chen and Coleman are former automotive journalists, having worked at Sport Compact Car magazine before finding their way to Mazda’s engineering department. It was a great chat.

So why is Mazda so bullish on gasoline compression ignition? “It goes back to the Mazda determination,” Chen said. “We did it with the rotary, we did it with a whole bunch of stuff. Everybody else says, ‘nah, it can’t work.’ We stuck with it because we really saw the value of the technology. Part of it is that we are a company of engineers, not bean counters, and so we said, ‘we want to make this thing.’ This is the right way to the future, we’re going to make it happen.”

Chen points out the difference in Mazda’s strategy. Other automakers seem to be hedging their bets, pursuing numerous different drivetrain strategies that are keyed to different regions’ regulatory structures. Mazda prefers to focus on one strategy, tweaking it regionally but applying it worldwide.

“As a company, we’re thinking more globally,” he told me. “In Thailand, let’s say, or Africa, there is no government incentive for a plug-in hybrid. In India, there’s not a huge market for PHEVs. We can still make a larger environmental impact by reducing overall greenhouse gas emissions throughout the majority of our engines. We’ve already done it by 23 percent with our [Skyactiv-G] engines, and that’s across the board, around the world. That’s our strategy, that’s our corporate responsibility. Sometimes, initially, it might not seem like the most cost-effective. But we’re engineers. We’re driven by certain ideals.”

It’s a bold strategy, one that fits with Mazda’s commitment to driving enjoyment. And in a strange way, Mazda’s small size, relative to major players like Toyota or Honda, allows it to experiment with stuff like Skyactiv-X. “Think of the people who still want to commute in a manual transmission,” Chen says. “There are always going to be those folks who are still drivers. So Mazda, a company with two percent of the North American market, we’re targeting very specific customers—people who can appreciate our design, our values, our ingenuity.”

“We don’t have to cater to the mainstream so much, being the size that we are,” Coleman adds. 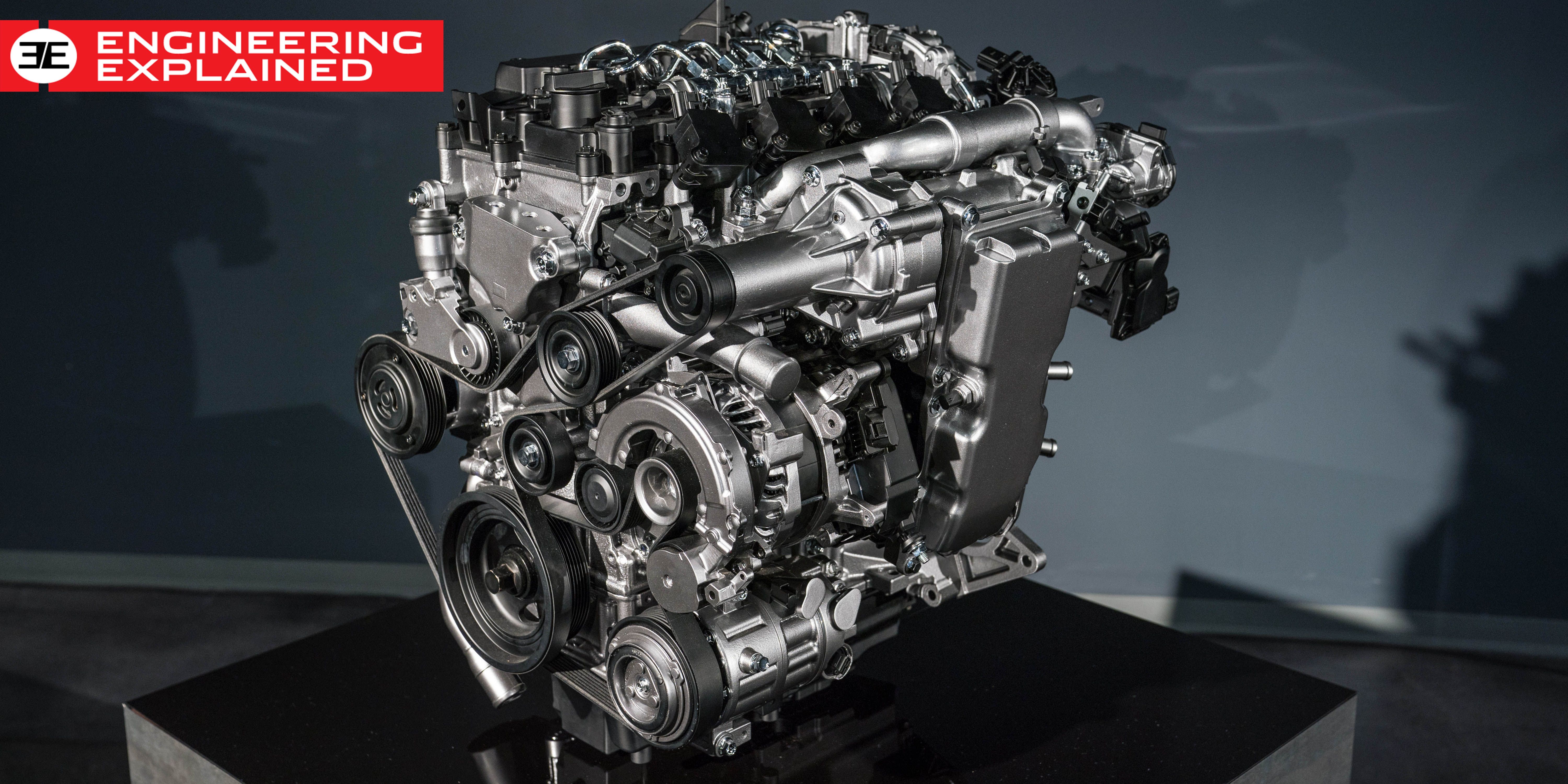 To that point, I ask the engineers about the planned drivetrain packages for the US-market Mazda3. Upon the vehicle’s debut, the automaker made a point of saying that it will be available with a manual transmission, offer a variety of gasoline engines including Skyactiv-X along with a diesel option, and will have the option of all-wheel drive. But Mazda didn’t specify how these different items could be combined—which engines, transmissions and drivetrains would be available together. Chen explained that it’s not set in stone just yet, but he noted that the first Mazda3s on the US market will offer the 2.5-liter Skyactiv-G engine, a choice of manual or automatic, and available all-wheel drive.

“The all-wheel drive can be paired with automatic and manual, there’s no limitation on that,” Coleman added. “It just comes down to us looking at the current climate of customers. Everything is on the table.”

Skyactiv-X will come to the Mazda3 lineup slightly later. And unlike many of the most advanced engines being offered by other automakers, Skyactiv-X is designed to work with a manual or an automatic. 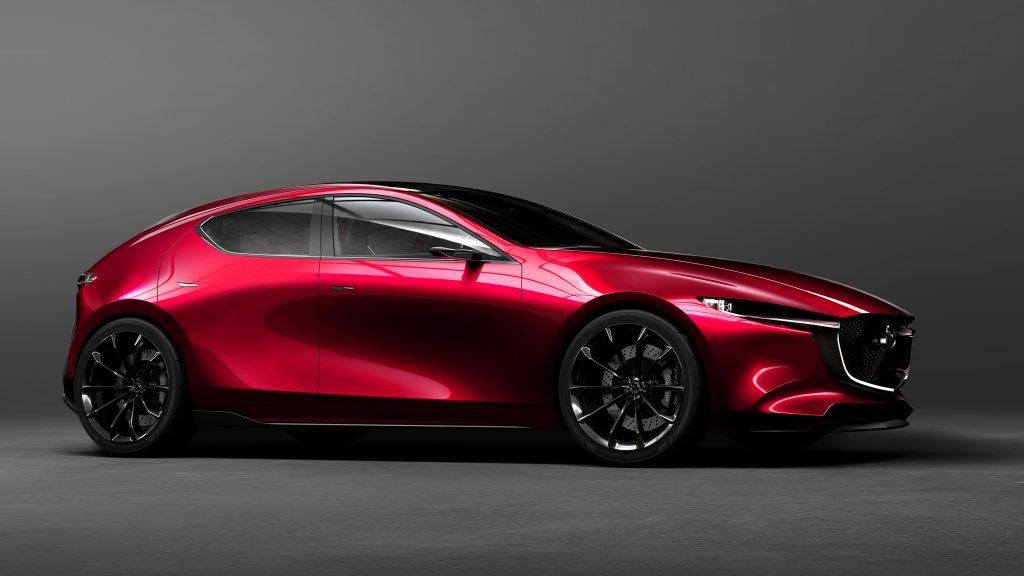 Coleman goes into detail. “Part of the challenge that other automakers are seeing is from the strategy of how they’re trying to make the cars efficient. They’ll have an engine that has a narrow little peak where it’s super efficient. And then you need to get the transmission to play along to keep it on that peak. You drive a nine-speed car on the freeway, every time you touch the gas, it’s shifting, 9-8-7-9-7-8-9. You end up with this springy, spongey accelerator pedal that’s not directly connected to anything and this powertrain that’s trying to figure out what you’re doing.

“We have a very different philosophy. Designing from the driver out, what does the driver need? They need a wide powerband that’s flexible and direct and responsive at all times. So our automatic transmissions are locking the torque converter a lot of the time, so they feel like a manual. We have fewer gears, so every time you step on the gas, you don’t have to wait for a shift. You have a direct response. Starting from that point, where we build our engines with the widest powerband possible, and having fewer gears in the transmission, and trying to make it directly responsive to what the driver is doing, that naturally translates to a manual transmission. Even our automatics are built around the concept of the manual. The driver controllability, the direct controllability is the number one thing we’re after. This is not us being behind the times or cost-cutting. This is a very conscious decision. We’ll try to make a really torquey engine that will just pull in sixth gear. And you get so much more of a connected rewarding feeling when you’re driving the car.”

“That’s very natural, that’s human-centric,” Chen adds. “We want to hear the engine build. Any interruption in power or g-load throws you off. That’s why it’s frustrating, that’s why people don’t want to drive cars anymore, it’s like, I don’t know what the heck is going on.”

“The way we do it, I think everybody can feel the difference,” says Coleman. “Very few people can recognize an explanation of the difference. So we need to get butts in seats to drive the car, and people might not be able to explain what it is that made it feel good, they’ll just have a certain feeling.”

“We wish we could put a competitor car in the showroom next to our car,” Chen said. “Go drive it, the sale is done. You’ll feel it immediately. But to explain it through words, what is a good sounding engine, what is a good feeling car, what is the roll rate that feels comfortable. That’s so difficult to communicate. It’s just muscle memory and your library of experience.”

“It’s not just cars,” Coleman adds. “How many uncomfortable chairs have you sat in? Things tend to get designed with the wrong priorities in mind. That pattern repeats itself through designs of everything.” 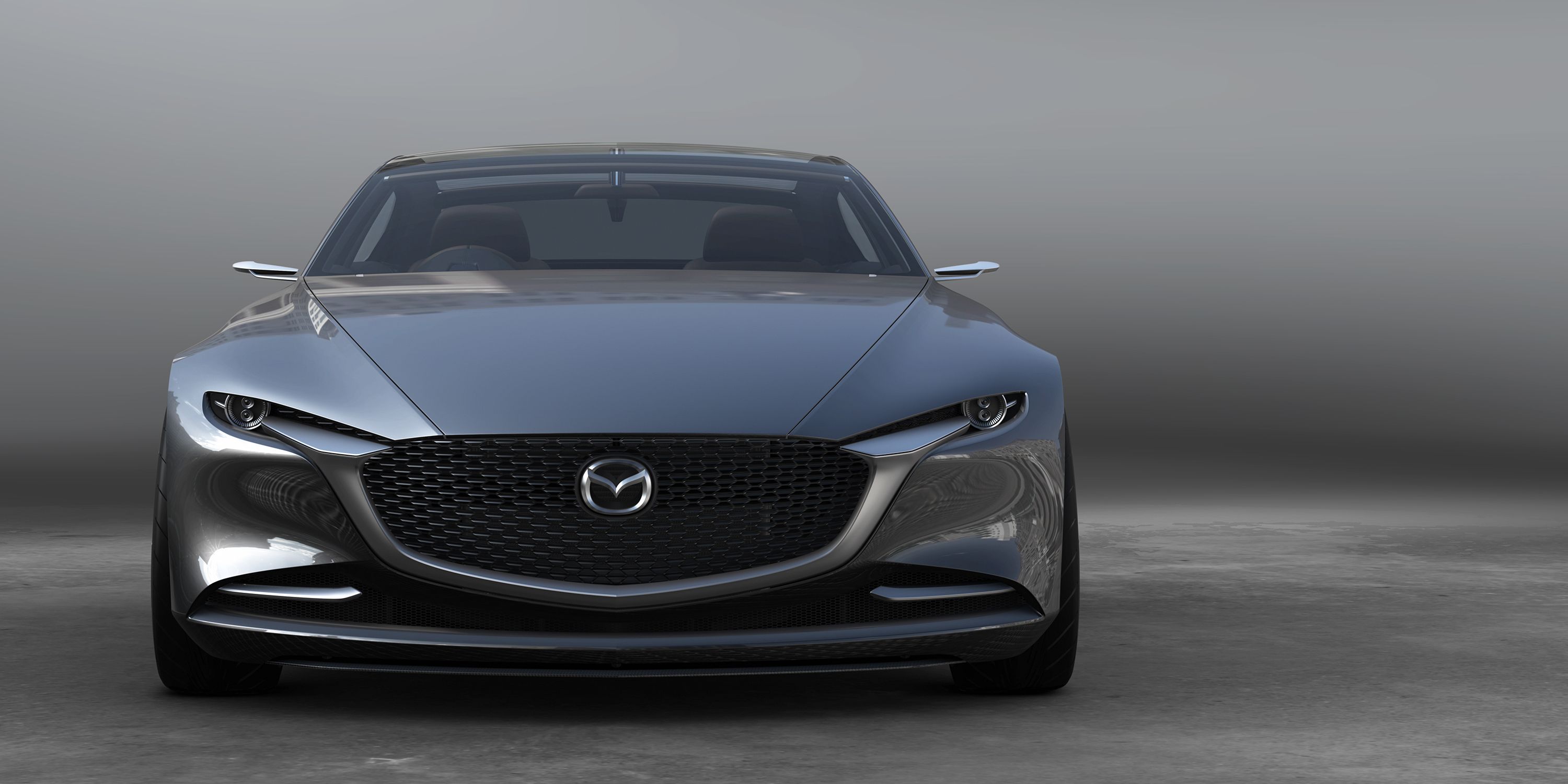 This gets at the philosophy driving Mazda right now. “It was a change,” Chen says. “Like many companies, we were evolutionary in designing and creating the next-generation product. It was only with Skyactiv that we started looking at this ideal state. What is it that makes the human feel the most intuitive, the most comfortable in the car, create that jinba ittai bond? And from there, we started figuring out what we needed to do. Instead of trying to figure out how to make the car corner faster, let’s figure out how the human body works and design a car that responds in the way the human body is used to. Automatically, things feel right. We had to scratch our heads a lot to figure out what the body wanted. Nobody ever thought, in transmission tuning, that the sound was a bigger criteria than torque. You feel a mis-shift by sound, not by the g-load. So when a car shifts into the wrong gear, you feel that instant disconnection from your intention to what the car’s doing, and that’s the dissatisfaction. We’re trying to bridge that satisfaction gap.”

“There’s a lot of cars out there that have so many different drive modes,” Coleman adds. “All that means is that none of those were tuned very well, because you don’t have time to tune them all right. Our idea is to make the car drive right based on what’s universally true for humans, and then everyone should be happy. There isn’t a sporty steering setting and a normal steering setting. Good steering communicates to you, lets you know where it’s gonna go, and is very direct and consistent. That’s baked in all the time.”