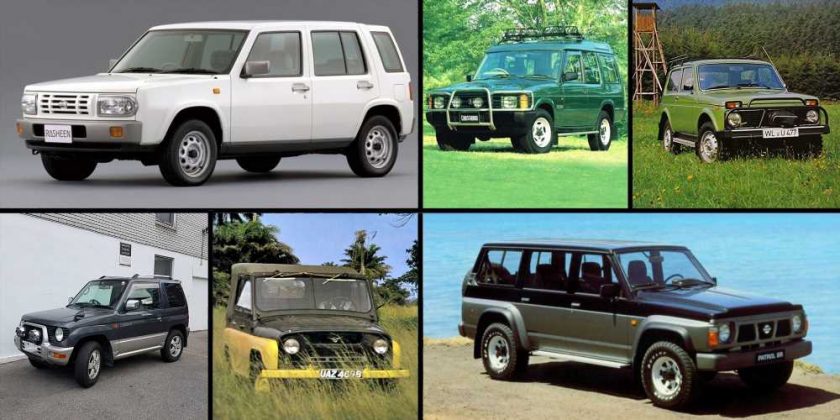 Tired of owning one of five identical SUVs in your own neighborhood? Thanks to the 25-year-rule, you can privately import a vehicle from the not-so-distant past, something hailing from around the dawn of the internet age. There are plenty of 4x4s from this dial-up time period that are still on the roads today, and some of them have been very reliable. What’s more, some are in this country already looking for owners, after having been brought in from Japan or Europe. The demand for JDM vehicles alone has prompted importers to seek out the best examples of eligible SUVs like the Toyota Land Cruiser and the Nissan Patrol, among others, and to offer them to eager buyers here. But with a little bit of work, a specialist importer firm and a little cash, you can have an SUV of your choice on a ship within a week or two, and then pick it up in port on the east or west coast.

But what should you get? Besides the very obvious and generally reliable J80 Land Cruisers, there are a few more offbeat choices out there that have sailed into the 25-year window in the past few years. Here are 10 that will certainly turn heads at the next (socially distanced) 4×4 get together.

For decades the Patrol had been Nissan’s Land Cruiser, but it never quite made it stateside. The latest generation eligible for importation is the fourth, produced from 1987 to 1997, and it paired a wide track with a spacious interior and plenty of off-road ability. Just like the Toyota Land Cruiser, these were very capable off-roaders lightly disguised as road cars, often drafted into military services around the world, including United Nations’ forces. Offered in three- and five-door form, the fourth-gen Patrol offered a choice of three inline-six engines ranging in displacement from 2.8 liters to 3.2 liters, in addition to a turbocharged inline-six diesel. That’s right: These didn’t have a V8, but the inline-sixes were very economical and provided plenty of power. The wide track also gave these beasts plenty of presence. The five-door wagon is probably the version to go for, and a number of these have been imported into the U.S. in recent years, since the model became eligible thanks to the 25-year-rule.

Why import it: It’s an off-roading legend.

Lada’s classic Niva hadn’t changed much over the years since being introduced in 1977. The Niva was the first non-Fiat-based model developed by VAZ, or Volzsky Automobilny Zavod, which acquired the production line for the Fiat 124 a decade prior. The small Niva proved to be a capable sport utility, one of just a few that Soviet citizens could buy, and it found fans in a number of export markets, including Canada. That’s right: The Niva was sold in Canada for a time, alongside the 2108 and 2109 hatches, all the way through the early 1990s, offering some competition to the small Japanese sport utilities of the time. In Canadian versions you’ll have a choice of 1.6- and 1.7-liter inline-fours paired with a four- or a five-speed manual.

Why import it: It’s cheap, easy to fix and surprisingly resilient.

You would think that we had gotten just about all the trims and variants of the Discovery in the 1990s, but that’s far from the case. In fact, the three-door Discovery went on sale first in 1989, and the five-door only entered production the following year. Despite having two fewer doors, the three-door Disco isn’t all that much shorter than the five-door model and it still seats five—and you can add two more seats to the cargo section. The three-door model was available in most other export markets for Land Rover, and stayed in production through the end of the model’s initial product cycle, which ended in 1998. As usual, the U.S. received only the higher trim versions of the Disco, so you couldn’t get one with a diesel engine. But in other markets the SUV could be quite basic inside and out, so you could option a three-door with a turbocharged 2.5-liter diesel four or a 2.0-liter gasoline inline-four.

Why import it: The payoff would be having the most unique Disco at the next Land Rover meet, because who else would have a three-door diesel?

The Rasheen didn’t really look like any other Nissan on the market at the time, with clamshell design details seemingly invoking Wartburg 353 design, boxy shapes and chrome-framed headlights. The small SUV was seemingly out of time—it could just as easily be a design from the 1970s as from the 1990s. Offering the cargo space of a large station wagon, the Rasheen effectively previewed the crossovers of the past decade even though it entered production in late 1994. Small inline-fours powered the Rasheen from a base 1.5-liter unit to a 2.0-liter unit, with a choice of five-speed manual and four-speed automatic.

Why import it: You’d have one of just a handful of these in North America.

If the regular Mitsubishi Pajero is too big for your garage, you could always get a Mitsubishi Pajero that had been shrunk the dryer. With an overall length of about 130 inches, the Pajero Mini was built to Japan’s kei car requirements, all while offering some modest off-road four-wheel drive capability. Due to the fact that it’s a kei car, this means that it has a 695-cc inline-four underhood. This makes the Pajero Mini a reasonably capable (and very cute) off-roader, just not a very quick one. But it’ll climb curbs in Japan or a suburb of your preference. You could even fit two of them in a row into a single garage spot.

Why import it: It’s too cute not to import it.

One of the most spectacular (and by spectacular we mean dubious) automotive collaborations of all time was the Rover and Honda partnership that began in the 1980s. Not only did it give us Sterling for a short period of time, where Honda reliability failed to rub off on a British sedan, but it lasted well into the 1990s with some Honda models gaining Rover badges in the process. But the opposite was also true: Rover gave Honda the Discovery, to offer as its own large SUV, badged as the Crossroad. Sold in Japan from 1993 till 1998, the Crossroad was offered solely with the trusty 3.9-liter Rover V8. Despite the iffy nature of the project, Honda managed to sell several thousand of these in Japan during the model’s run.

Why import it: You’d be welcome at Honda meets and Land Rover meets alike.

Seemingly intrigued by the American Humvee, Toyota produced its own version that was remarkably similar in all aspects. But, given the fact that these were produced largely for the Japanese defense forces, it probably wasn’t going to see any military action barring some implausible circumstances. This doesn’t change the fact that the Mega Cruiser is a sight to behold, a sight that prob0ably has trouble fitting on a lot of Japanese city streets because it’s almost twice the width of a typical kei car. Powered by a 4.1-liter turbodiesel making just 152 hp, the Mega Cruiser recreated quite a lot of Hummer H1 features, including portal axles, 28.5-gallon fuel tank, a centralized tire-pressure control system and an impossibly boxy shape. Just over a hundred found their way into private hands after production began in 1995, and if you look hard enough you could probably find one for sale.

Why import it: The JDM off-roader community will be very impressed. As will your local Toyota dealer.

Pocket SUVs had a brief but memorable spike in popularity in the U.S. in the late 1980s and early 1990s, thanks to models like the Chevy Tracker, Suzuki Samurai, Daihatsu Rocky and several other Japanese models. But while larger SUVs took over in the U.S. in the 1990s, they never quite disappeared from Europe. The Nissan Terrano II was one of these small SUVs, and it paired a funky design with small gas and diesel engines. Built in Spain, with an exterior penned by Ercole Spada, the Terrano was offered as a three-door and a five-door starting in 1993. Compact dimensions, a generous ride height and a modest price made it a hit in southern Europe, and a snow-free climate helped preserve a lot of these.

Why import it: It’s practical and inexpensive.

The UAZ 469, made in Ulyanovsk, Russia, was the Red Army’s version of the Jeep for decades, introduced in the late 1960s. The 4×4 was relatively narrow and intended to be used as much as a civilian vehicle as a military runabout, and boasted impressive off-road skills. You may remember these dark olive SUVs from Goldeneye, when they were chased by a tank through the streets of St. Petersburg. The original UAZ 469 didn’t change much between the time of its debut and the late 1990s, when slightly modernized versions were introduced. But the ones that will be importable at the moment all hail from the early 1990s, and thanks to some surplus examples that wound up Warsaw Pact states, there is a relative abundance of them in Eastern Europe. And they’re not pricey. A 2.5-liter four good for 71 hp does the work underhood, while you do the work shifting the notoriously sticky gears. A number of these are already in the States.

Why import it: Off-roading Cold War-style. And UAZ is practically the national vehicle of Mongolia, which doesn’t have all that many paved roads.

SsangYong’s most popular SUV in Europe in the 1990s, the Musso featured a generous footprint, plenty of cargo space and a choice of engines from Mercedes-Benz. It was also rugged enough to do go off-roading, since this was an era when SUVs were genuine off-roaders. Its most prominent feature was that it was very inexpensive and capable for the day—a Toyota Land Cruiser for a fraction of the price. Coupled with Mercedes diesels, southern Europe, especially Spain, just loved these. You could get one of these with a 2.9-liter inline-five diesel or a 2.3-liter inline-four diesel, which made them thrifty to run. The top engine on the menu was a 3.2-liter gasoline inline-six, also borrowed from Mercedes-Benz. In fact, SsangYong promoted its Mercedes-Benz connection pretty heavily in marketing these, including large decals that said “Engineered by Mercedes-Benz” on the SUV’s sides.

Why import it: You’ll have the only one at the next 4×4 meet.