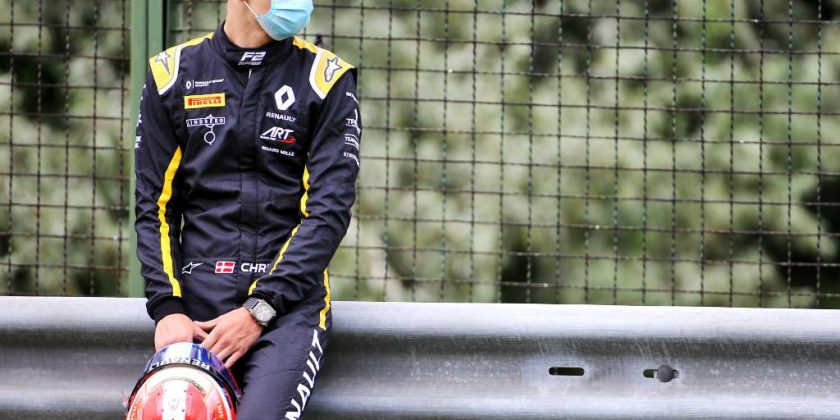 Christian Lundgaard has kicked off four days of Renault testing with their 2018 car by completing 101 laps of the Bahrain International Circuit.

In pictures released by the team on social media, the car featured a blue livery – which is expected to be the predominant colour next year when Renault F1 are rebranded as Alpine.

Piastri is due to be in the cockpit of the R.S. 2018 on Friday in what will be his debut outing in an F1 car, with Zhou taking over on Saturday and Sunday.

The test, which Renault says “showcases the continued commitment to the academy as it readies its junior drivers for a Formula 1 race seat in the future”, runs parallel to the Emilia Romagna Grand Prix at Imola in which the team are competing with Daniel Ricciardo and Esteban Ocon.

For Lundgaard and Zhou, the test is giving them priceless experience of the circuit at Sakhir, where they will complete their F2 season over the two weekends that also stage rounds 15 and 16 of this year’s F1 World Championship.

Day one complete of the R.S.18 test over in Bahrain. @lundgaardoff at the wheel ✅
101 laps ✅
542km ✅
Our favourite photos from the day 📸 👇#RSspirit #Renault #F1 @BAH_Int_Circuit pic.twitter.com/O4n1aHiFaB

“I’ve never actually raced in Bahrain, so the test is valuable for me especially since I’m driving there for the final two rounds of the Formula 2 championship,” said Lundgaard, the 19-year-old from Denmark who has won two F2 races this year and sits fourth in the drivers’ standings.

“We are looking to use the test to prepare for the race and also for me to learn more about the car. There is nothing better than learning a track in an F1 car, so it’s pretty exciting.”

Mia Sharizman, Renault Sport Academy Director, added: “The tests in Bahrain are part of a planned programme that the Academy has delivered every year for the past three years.

“It’s a good opportunity for us to show the progression and level of achievement of the drivers in the Academy.

“Christian and Zhou will be in the R.S.18 for the second time. Their days will be shaped like an actual race weekend with practice, qualifying and race simulations.

“Bahrain is a very good test location for us and beneficial for both Zhou and Christian, who will race here later in November for the final two rounds of the FIA Formula 2 Championship.”