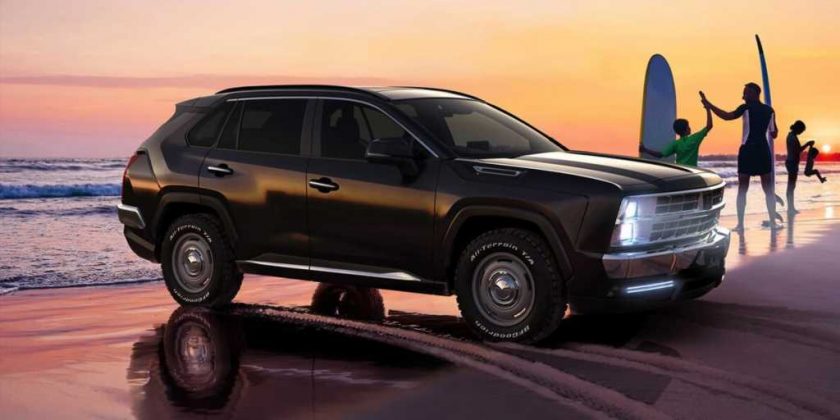 It was only a few days ago that Suzuki revealed the Across, a rebadged and lightly restyled Toyota RAV4 (and not sold in the United States). We thought it was strange, interesting, and unique. Unfortunately for Suzuki, Mitsuoka just dropped its own restyled RAV4, the Buddy, and it makes the Across seem positively ordinary.

Mitsuoka is most famous for the exquisitely bizarre Orochi, a mid-engined V-6-powered sports car named after a Japanese dragon and looking for all the world like a mad science experiment: What if a kaiju’s DNA was spliced into a car? But the company’s products have historically been all over the map—pedestrian Nissans wearing bodywork that vaguely recalls 1960s Jaguar sedans, a Mazda-powered Lotus Seven clone, the outrageous Neo-classical Le-Seyde (which looked like a mid-1980s Zimmer), and so on. All are strange, some delightfully so.

The Mitsuoka Buddy is something different from the company. It’s more along the lines of what other Japanese companies offer, such as the work done to kei cars (and vans, in particular), which involves restyling them to resemble classic vehicles, such as the VW Bus, or American vans, such as Dream Factory Blow’s retro Chevy, Ford, and Dodge fascias. The RAV4 isn’t a van, but the stacked sealed-beam headlights and chrome egg-crate grille are pure 1970s Americana. It doesn’t evoke anything specific, but there’s a strong hint of classic Chevy van with a bit of K5 Blazer or C/K pickup thrown in for good measure.

Since the sheet metal is mostly unchanged, the overall boxiness of those vintage trucks and vans isn’t captured in the Buddy’s profile, but there are more touches at the rear that reinforce the truckish appeal. A chrome bumper and recontoured tailgate are definitely retro, as are the steel wheels with dog-dish hubcaps seen on some of the renders. There are no pictures of the interior, so we don’t know if Mitsuoka’s brought more of a retro vibe to the inside.

Mitsuoka hasn’t made any radical powertrain changes and both front- and all-wheel-drive variants are available with power coming from either a 2.0-liter gas engine or a 2.5-liter gasoline-electric hybrid powertrain. Mitsuoka will fully unveil the Buddy on November 26. Mitsuoka has dealers in Asia, the Middle East, and Europe, but don’t expect to find the Buddy loose on any American streets.