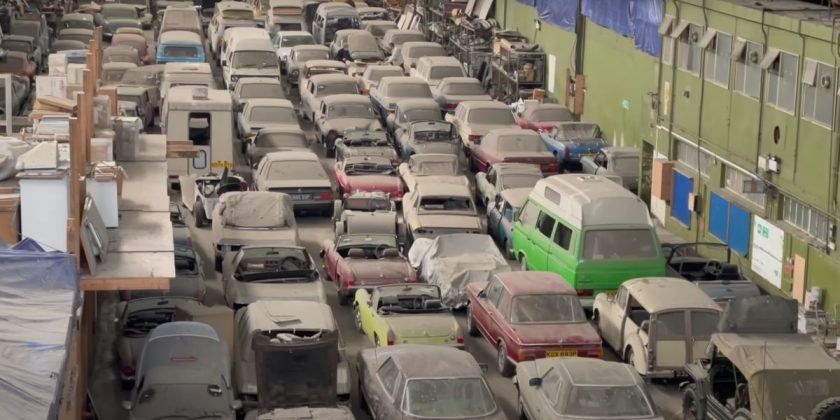 There’s a cluster of nondescript warehouses just off the North Circular road in Tottenham I’ve passed a bunch of times without once pondering what’s in them. It turns out, however, that I was driving by a treasure trove of classics that have been hidden away for years. Now, the contents of that North London building have been shown to the public, and it’s quite a sight.

There are 174 cars in total. There isn’t anything super exotic in here, but these kinds of ordinary (ish) vehicles are nonetheless sought after due to their scarcity and the general ridiculousness of the classic car market. Oh, and they’re all up for sale.

An Instagram account called London Barn Finds has been set up to show the cars off and detail the sale process. Despite only posting for the first time a few days account, the profile is already at nearly 15,000 followers as we write. One of the posts includes the full car list (above).

London Barn Finds said that the list “is not 100 per cent accurate due to many of the cars being without number plates and some missing documents entirely”. A couple we checked seem to be wearing the number plates of other vehicles. Most of the cars do include V5 registration documents, though, and a decent number of them have service history present.

In that warehouse are multiple R107 Mercedes SLs, various VW Campers and some classic Minis. Stand-out cars include a BMW 2002 tii, a 635 CSI, and a bizarre 1973 Porsche 911 made into a 964 replica. Amongst these are some very cheap bangers, too – we couldn’t help but notice the Citroen Berlingo with a guide price of a mere £100.

The condition of the vehicles varies greatly, although most are wearing a thick layer of dust, and many have been liberally splatted with bird poo, which is very bad news for paintwork if left for a long time. All cars are said to run, at least, and a few can be seen idling away in the video at the top of the page from TheTFJJ, which was shot during a public viewing session on Bank Holiday Monday.

It’s not clear how long the cars have been there and the circumstances surrounding the sale (we’ve contacted London Barn Finds for more info and are awaiting a response). A quick search reveals some were taxed for road use as recently as 2016, while others have gone without a license for over 25 years.

See also: An 81-Car Barn Find Is Headed For Auction With Prices Starting At £50

Rather than task a physical auction house or one of the many new online bidding services to move the cars on, London Barn Finds says it’s offering ‘sealed bids’ following the viewing day.

We’d love to hear from anyone who viewed the collection and/or put in a bid.