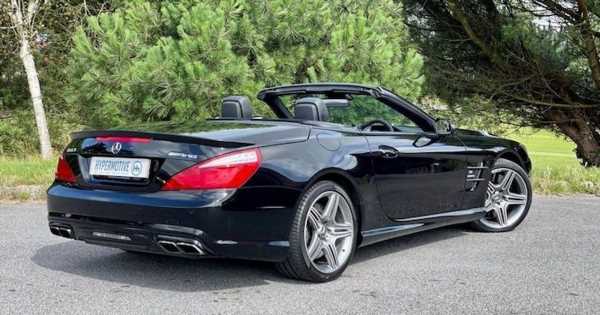 Earlier this week Mercedes-AMG finally revealed its first plug-in hybrid. The car, as we’d once suspected, adopt the ‘73’ designation, but the clunkily-named GT63 S E-Performance is about as powerful as we’d expected with an unhinged 831bhp on tap. The torque, meanwhile? That stands at 1033lb ft.

Other figures weren’t quite so spectacular. The electric-only range is a mere seven miles. Oh, and it weighs 2.4 tonnes. Suddenly, the GT63 S E-Performance doesn’t quite seem such a great leap forward in progress. It’s bonkers that cars from AMG’s past we used to consider heavyweights are significantly lighter than this brute. The R231 SL63, for instance, undercuts Affalterbach’s latest effort by around 600kg. It could be pulling along a basic Caterham Seven and still be lighter.

It doesn’t matter that its 530bhp output is some 300bhp down on what the E-Performance makes – it’ll still feel quick thanks to the comparatively pithy weight figure. It sounds good, too – AMG’s old 5.5-litre, twin-turbo V8 arguably makes a better noise than the 4.0-litre lump that replaced it.

There was the option to upgrade to the SL65 with its 6.0-litre twin-turbo V12, but the extra performance wasn’t worth the horrific depreciation and the tyre bills associated with having the rear wheels assaulted by 738lb ft of torque. The V8 was always the one you wanted.

Neither can really be considered proper sports cars in the way some newer AMGs can be. These cars were devised before manufacturers got really good at making luxury barges freakishly good to drive, but there’s nothing wrong with that. Comfort is the order of the day, meaning the SL will be more enjoyable to drive more of the time. And when you’re going fast, some body roll will merely add drama.

This generation of SL isn’t quite as pretty as the older R230, but – whether the folding metal roof is up or down – the R231 is still better looking than most of the cars in Mercedes’ current line-up. The Obsidian Black of our classifieds pick from Autotrader certainly suits it, but if it has been us doing the speccing when this was ordered nearly 10 years ago, we’d have probably contrasted the paintwork with some brighter interior trim. Still, it’s a good-looking cabin all these years on.

This 2012 example will set you back £39,750, a fraction of its original price. That’s only a little more than the starting price of a VW Golf R, which can easily be inflated beyond £45,000 once some options are picked.

Ownership of a near-10-year-old AMG isn’t going to be anything like as straightforward as running a brand new hot hatch with a fresh warranty, but the extra headaches and expenses will surely be worth the uplift in class and that V8 soundtrack. Well, depending on whether or not the Active Body Control suspension goes wrong…