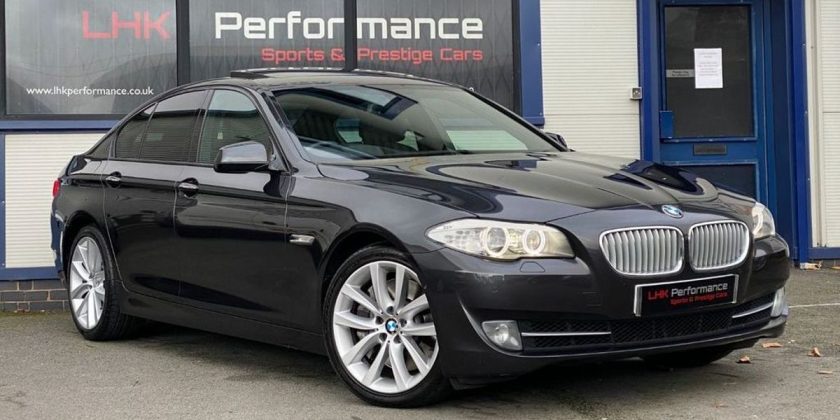 The new BMW M550i is one of the cars that impressed us most in 2020. So much so that we gave it a place on our recent best super saloons round-up in place of the current M5. Controversial.

It’s a lot cheaper than its full-on M car big bro, but you do still need to part with £71,365 to buy one, and that’s before options. If you’re happy dropping some power and missing out on the latest and greatest tech, though, it’s possible to pick up the M550i’s predecessor for a fraction of the price.

Our pick from the classifieds is a 2010 F10 550i. Badging aside, you really wouldn’t know it’s packing just over 400bhp. Finished in Sophisto Grey with some relatively subtle wheels, it could easily pass for a 520d.

Instead of an inline-four oil-burner, you’re getting a 4.4-litre N63 V8 with a ‘hot V’ layout that places two turbochargers between cylinder banks. Powering the rear wheels exclusively, the eight-pot makes for a five-second 0-62mph time, assuming you get the required traction off the line.

The N63 has its fair share of potential problems ranging from leaking valve stem seals to excessive oil consumption, but this example does handily have six months left on an official BMW warranty. It also has a full BMW service history.

The 550i has covered just 57,000 miles during its 10 years on Planet Earth, well below the average figure for a mid-sized saloon like this. The original buyer splurged £12,850 on options, including an upgraded infotainment system, a head-up display, leather electric seats and a rear parking camera.

The price for all this? A mere £15,995 – less than a quarter of the starting price of a new M550i, and only a few thousand more than the original cost of the F10’s options.