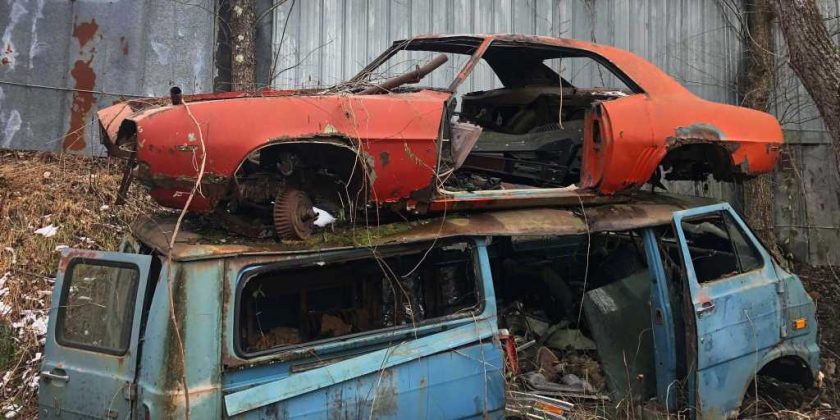 We all love our barn finds, but barn found cars are the lucky ones. After all, the name implies that they are at least under some sort of cover. More tragic are the field-found cars that have been out languishing in the weather. Now, in a sunny, dry place like Arizona, that’s not as bad, but other areas of the country are a lot harder on these forgotten muscle cars. This story is about three 1969 Chevy Camaros that were recently saved from a scrapyard in Lovely, Kentucky.

Hundreds of cars were slowly dissolving in this yard. Sadly, the owner had passed away, so it was left to his widow to clear it all out. Cody Belcher was looking for some projects, specifically Camaros, so he was the proverbial right guy at the right place at the right time.

As Belcher told us, “We moved 14 cars to get the convertible out and another six cars to get the other two ’69s out to trucks.” The place was full of cars, trucks, vans, and all sorts of stuff, much of it stacked three high.

As he continued, “The convertible and orange hardtop are both RS cars, and the blue Camaro is a base model. We plan on restoring the orange [RS] for my father as a surprise birthday gift, and we’re currently undecided on the other two cars. Both Rally Sports were originally orange with white interiors. All three Camaro[s] are rough but still buildable.” As a bonus, they even got some free shrubbery.

Belcher was focused on the Camaros, but he told us there was a bunch of Mopar stuff including ‘Cudas, Roadrunners, and Darts on the lot. Sadly, many looked too far gone to be saved.

If you look closely, you can see a few really cool cars in these images. There were even some super cool vans that caught our attention and a pretty uncommon AMC Eagle SX/4! We’re pretty happy that these three Camaro barn finds will be saved, and we’re hopeful that other gearheads will scoop up anything else there that can be saved, too.

READ MORE
Barn Find! Rare, Highly Optioned 1969 Chevy Camaro RS/SS Found After Four Decades
Can You Believe This Is Actually a Chevy Camaro?
Tested: Get Your Flair on With an Accessorized 2020 Chevrolet Camaro SS