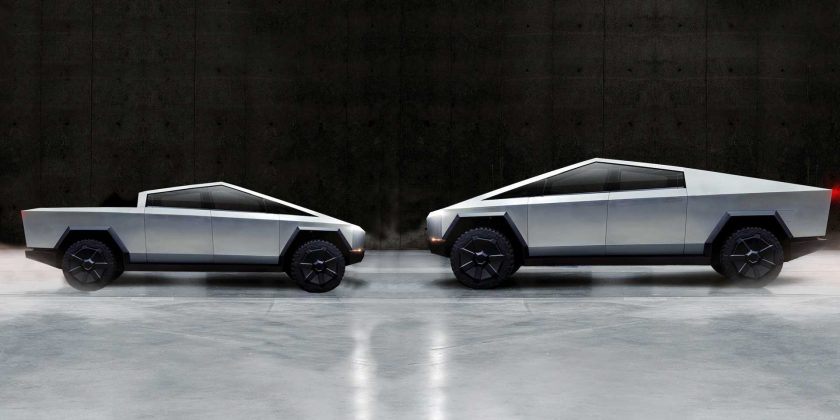 Elon Musk said at one point that it would make a lot of sense for Tesla to make a smaller Cybertruck, but he never took the idea any further, at least not publicly. He just said that it would make sense to have a more petit Cybertruck added to the range in the long run, but  that was in November of 2019 and we’ve not heard anything on the matter since – the smaller model was never officially confirmed.

Now we have information that Tesla may reveal the both versions during a special event expected to be held in March of 2022. The news comes from Trip Chowdhry, an analyst with Global Equities Research and a known Tesla bull. He recently said that not only would the two versions be shown in March, but also that both will feature ‘significant tweaks’ compared to the first Cybertruck shown.

He didn’t go into details as to what the changes are, but he did say the smaller Cybertruck is around 15 to 20 percent smaller. Both vehicles’ shells will reportedly be built by the same company, Steel Dynamics from Texas, whose operation is located around 100 miles from Tesla’s Texas Gigafactory.

Don’t expect Tesla to mention any of this in its next earnings call planned for Wednesday, January 26, according to Chowdhry. We would also add that you should not expect Cybertruck deliveries to begin this year, since a new report published by Reuters now puts its start of sales in early 2023 (production may begin around the end of this year).

The news agency says Tesla has postponed the Cybertruck for so long to make important changes to its design, after seeing pickups from rival automakers appear on the scene with their own list of impressive specs and features. And there would certainly be a market for a smaller Cybertruck, with other automakers already rumored to be working on such models.

The smaller Cybertruck would rival models like the rumored Ford Ranger EV and even Nissan is said to be working its own electric pickup in the same size bracket.