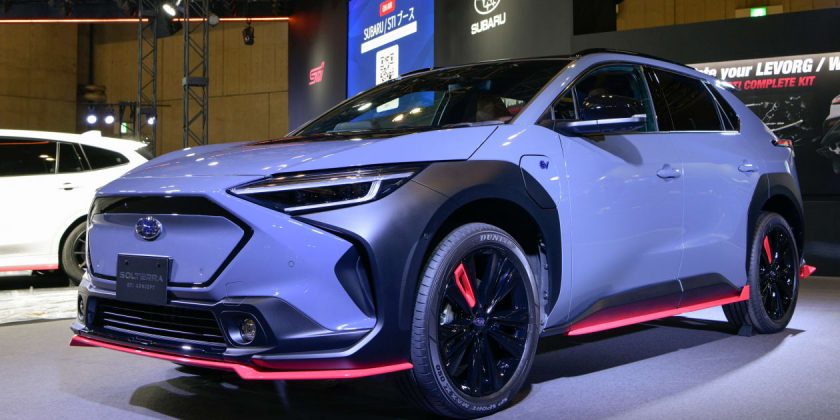 A high-performance STI version of Subaru’s Solterra EV has been revealed in concept form at the Tokyo Auto Salon, hinting at a potential production version

Subaru has unveiled a Solterra STI concept car at this year’s Tokyo Auto Salon, giving an early taste of what could be a production version of the sporty electric crossover later down the line. The STI version gets an aggressive styling makeover, although Subaru hasn’t released performance figures for the high-performance concept EV.

The Solterra STI concept receives a unique lilac colourscheme, and numerous aero modifications to set it apart from the standard version. The front bumper is carried over from the existing car, with an angular facia and black plastic wheelarch cladding that extends to the headlights.

The STI version gets a prominent front splitter finished in cherry red for a more sporting appearance, but the wheels are shared with other Solterra models, save for a unique gloss black finish with red accents. The STI concept does, however, wear sportier Dunlop Sport Maxx rubber, hinting at its increased performance.

The red accents carry through to the extended side sills of the car, which feature aero fins ahead of the rear wheels. As with the standard Solterra, the STI concept receives gloss black door mirrors and a black roof, which visibly lowers the car’s roofline.

In true STI fashion, Subaru has fitted the sportiest Solterra with a large rear wing that features red STI logos on the end-plates. The rear bumper is identical to other Solterras’, although small aero extensions have been added behind the rear wheels.

Under the skin, the Solterra shares its e-TNGA platform with the Toyota bZ4X. Currently, the most powerful model is the 215bhp dual-motor variant, and if the project gets the green light we expect an output closer to 300bhp. The STI model will also be four-wheel drive.