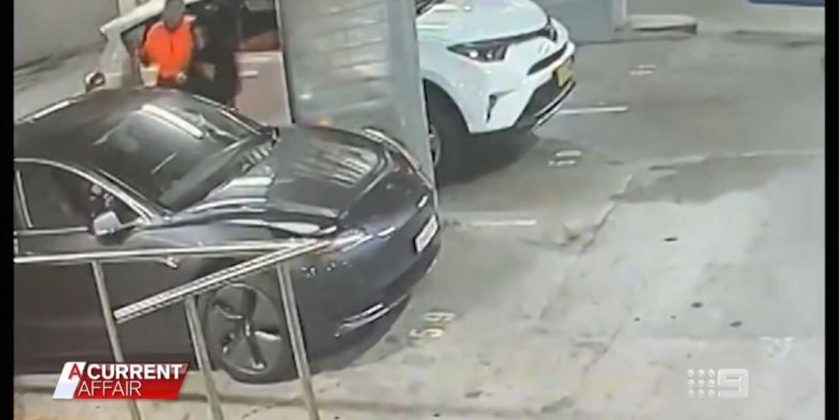 These thieves don’t seem to have a clue, but the whole story is pretty comical and informative.

Tesla Model 3 owner Annabelle Brett was alerted that her car’s alarm was triggered. The notification came to her phone via the Tesla Mobile app. Of course, she headed to the locked parking garage to check on her car, only to find it had gone missing. However, she knew the car would have Sentry Mode footage of the incident, and she also knew she could track its whereabouts using the app.

In an interview about the situation with A Current Affair, Brett shared:

“On my car phone app, you can actually see where the car is. We noticed that it was just around the corner so without thinking, I jumped in the car called the police… and just basically followed them on the map.”

We definitely don’t suggest setting out after car thieves on your own. However, Brett was smart to take a friend along, as well as contact the authorities. While Brett was tracking the Model 3 and proceeding to its location, she was also able to use the Tesla Mobile app to activate Valet Mode, among other features not directly related to safety or security. This means she could honk the horn, flash the car’s lights, open and close the roof and windows, control media, and more.

Brett took full advantage of the app’s features to not only slow the car down but also to mess with the car’s features to assure she had the thieves’ attention. She explained:

“My phone app has the ability to slow down the car and also mess with it a bit, so I was able to put the windows down, beep the horn and basically screw with them as they were driving it.”

It didn’t take long before the criminals changed plans, left Brett’s Model 3, and tried to flee. The thieves were in such a hurry, they left one of their driver’s licenses in the car. It didn’t matter much though, since Brett had the incident on camera, and one of the criminals was easily identified.

Check out the brief video above for the whole story. Then, leave us your takeaways in the comment section below.

A Current Affair via Teslarati