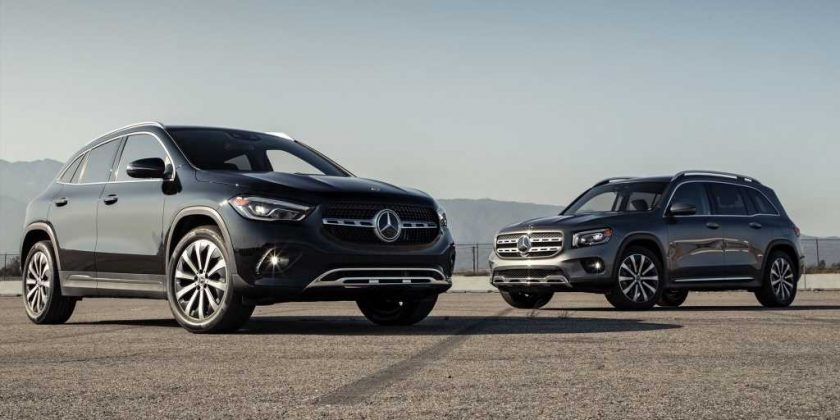 This was bound to happen. Luxury brands such as Mercedes-Benz are filling every niche on the market. Sometimes twice. Case in point: the 2021 Mercedes-Benz GLA 250 and 2020 Mercedes-Benz GLB 250, two SUVs from the same automaker competing against each other in the same subcompact luxury SUV segment. You, dear consumer, may be asking, which one is better? How do you distinguish mini-utes beyond appearance? Why are luxury automakers filling such tiny segments? To answer these questions, we have both vehicles and we’re pitting them against each other in a GLA-Class-vs.-GLB-Class sibling showdown. May the best Mercedes-Benz subcompact SUV win.

Both the GLA 250 and GLB 250 are motivated by the same 221-hp 2.0-liter turbo I-4 paired to an eight-speed twin-clutch automatic transmission. Power is adequate for the average consumer in the GLA. However, in the heavier GLB, the engine struggles—especially when going up inclines. This was evident at the track where the GLB 250 hit 60 mph in 7.2 seconds and ran the quarter mile in 15.6 seconds at 88.8 mph, 0.4 second slower to 60 mph and 0.3 second slower in the quarter mile than its GLA counterpart. Excessive turbo lag amplifies the feeling of sluggishness you get driving the GLB. The gearbox downshifts promptly when you get on the throttle to pass slower traffic, but unfortunately it’s clunky at low speeds, hunts for gears outside of Sport mode, and is slow to engage from a standstill. Together with the engine’s delayed responses, the powertrain exudes a sense of laziness when accelerating from a standstill.

Mercedes’ two smallest SUVs share the same underpinnings, but you wouldn’t know it when you drive them back to back. “I thought I was driving a hatchback instead of an SUV,” MotorTrend en Español managing editor Miguel Cortina said of the GLA’s driving experience. The low roofline, sedan-like seating position, and tidy dimensions amplify the compact car vibes you get behind the wheel. Cortina liked that the GLA is easy to drive thanks to good body control and nicely weighted steering. However, he complained that the tires squeal too soon when you take turns enthusiastically, hinting at the lack of grip to handle the chassis’ capability. Thankfully, the GLA stays composed, handily soaking up road imperfections without getting floaty. Interior noise is kept in check nicely in the GLA, something you can’t say regarding the GLB, which suffers from excessive wind buffeting, road noise, and tire roar.

The larger GLB feels more SUV-like than the GLA because of its raised seating position, giving the driver a commanding view. Too bad the GLB’s road manners aren’t as pleasant as the GLA’s. There’s more body lean through corners because of the higher center of gravity, and Cortina noted that the brakes don’t feel very strong, although numbers show that at 122 feet and 123 feet, respectively, the GLA and GLB’s stopping distances are evenly matched.

The GLB’s suspension is also stiffer than the GLA’s. Even with the available adaptive dampers on the softest setting, the GLB doesn’t do a good job filtering out harsh impacts and road imperfections. Forget about Sport mode because the ride deteriorates further. At least the steering is similar to the GLA’s, enabling the driver to maneuver the GLB with ease. At the limit, we found that the GLB held the road better, generating 0.82 g of lateral acceleration on the skidpad and lapping the figure-eight course in 27.5 seconds at 0.63 g. In comparison, the GLA generated 0.2 g less lateral acceleration on the skidpad and figure eight and was 0.3 second slower to finish the latter.

Not all SUVs are created equal, and that’s evident when you look at two similar models such as the Mercedes-Benz GLA 250 and GLB 250. Get inside the GLB, and you’ll find generous head- and legroom in both rows. You can even add a third row (optional), but it’s vestigial and unusable for adults. (Mercedes even suggests an upper height limit for riders in that third row that all but confirms the perch was designed for children.) In any case, the boxy shape enhances the GLB’s usability, and a two-level cargo floor provides additional flexibility.

Although it’s larger than the outgoing model and can seat four comfortably, the second-generation GLA continues to put style ahead of practicality. Due to the low roofline and small footprint, the GLA’s cargo capacity is significantly smaller, even with the rear seats folded and the two-level floor in its lowest position. Seeing out of the car is harder, too, because of the narrow windows.

A luxury vehicle’s interior should please the senses, and it’s fitting that both the GLA and GLB sport modern, trendy cabin designs. Cortina liked that the ambient lighting gives an Ibiza-style night club vibe, fitting for two SUVs aimed at a younger demographic. Sadly, the eye candy isn’t backed up in the quality department; the lack of attention to detail is glaringly obvious. “I expected more, even from an entry-level Mercedes,” Cortina said. “Touching the door handle feels like the cheap plastic toy your mom bought you from Five Below when you were a kid.” Even the seats don’t feel like they belong in a premium-badged vehicle; they’re hard, and the leatherette upholstery doesn’t seem durable.

Mercedes’ latest vehicles use the MBUX interface featuring dual displays (7.0-inch screens are standard; 10.3-inch ones are optional). Instead of a conventional voice command system, Mercedes added a Siri-style virtual assistant that you can call up by saying “Hey, Mercedes” or “Mercedes.” The feature easily understands natural speech if you speak at a normal pace but can’t keep up if you talk too fast. The responsive main touchscreen is the easiest way to interact with MBUX. Cortina found the touchpad distracting to use on the move and disliked the sea of submenus. The black mini touch-pads on the steering wheel are equally annoying to use because they don’t react to your inputs immediately and force you to take your eyes off the road too often.

Safety is an important purchase motivator, so while many automakers are making driver assistance technologies standard across the board, luxury brands like Mercedes-Benz apparently have yet to receive the memo. You get basic collision prevention technologies such as forward collision warning, lane departure warning, blind-spot monitoring, and front automatic emergency braking as standard. However, if you want everything, you must add the Driver Assistance package ($1,700 on GLA; $2,250 on GLB), which requires the Premium and Multimedia packages, adding another $3,045 or $$2,800 respectively. Cortina was disappointed that these features weren’t standard in our $44,405 GLA 250 tester, adding “A Honda Civic has adaptive cruise control standard.”

Our GLB 250 came equipped with the Driver Assistance package. Adaptive cruise control works well, leaving the right amount of gap to the vehicle ahead. The lane keeping and centering functions, on the other hand, only work accurately when lane dividers are clearly marked. Is it worth it? Nope. At $50,480, this GLB’s price is downright bonkers for a subcompact SUV, even one that’s nearly as big as Benz’s compact GLC-Class. We wish Mercedes would make these features standard or at least allow buyers to add the Driver Assistance package on its own.

Automakers’ penchant for filling in automotive niches you never thought existed has resulted in vehicles so similar they’re cannibalizing each other. This is due to brands wanting to maximize their share of the pie. The GLA and GLB may look different, but they cater to a similar consumer despite the latter being slightly larger and more practical. Unfortunately Mercedes is inexperienced in building entry-level vehicles, and both models suffer from poorly strategized cost-cutting, as is evident in the material quality and the lack of key standard features.

Looking closer at Mercedes’ two subcompact SUVs, you’ll find that one is more polished than the other. Lessons learned from the outgoing model resulted in an improved second-generation GLA, allowing it to win this comparison. Sure, the GLB offers more interior space, but that comes at the cost of ride comfort, handling, and straight-line acceleration. The GLA is the superior vehicle, thanks to agreeable road manners and enough practicality to make it a viable daily driver.

Second Place: 2020 Mercedes-Benz GLB 250
Roomier and more SUV-like thanks to the boxy dimensions, but trades too much refinement for the extra practicality and rugged looks.