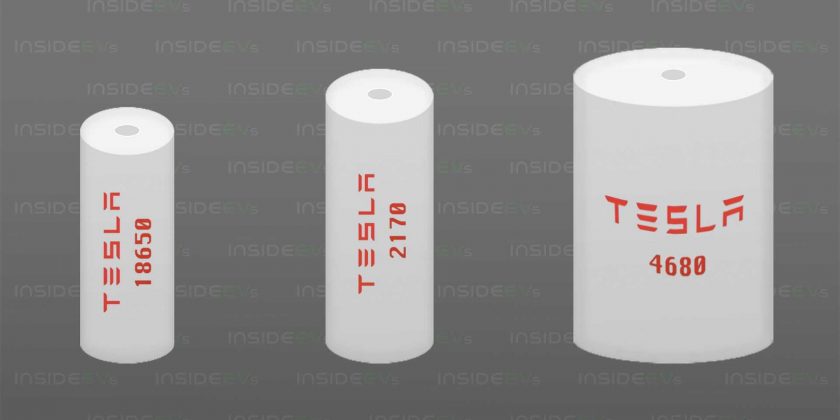 No cobalt chemistries in the long term.

During the Q2 2021 earnings call, Tesla’s CEO Elon Musk said that in his opinion, it would be ideal to have 1-3 battery cell formats.

From the beginning, the company has been using only small cylindrical cells – first 1865 (18650) in the original Roadster, the Model S/Model X, and then a larger 2170 format in the Model 3/Model Y.

The upcoming third form factor is a much larger cylindrical cell – 4680, that are in an advanced stage of development.

It’s quite interesting that the company will not switch to a new “better” cell format, but simply use it in new products, while the previous models will still use the existing formats. The refreshed Model S and Model X are still using 1865.

According to the earnings call report (via Teslarati) Tesla is working on the new 4680 cells with its existing suppliers:

“Elon confirms that Tesla is working with its existing suppliers to produce 4680 cells for its vehicles. He also noted that Tesla’s iron-based vehicles will not use 4680 cylindrical cells, as predicted by some of the company’s more ardent bulls. Elon believes it would be ideal to do 1-3 cell formats, especially considering the massive backlog in demand for the company’s product lineup.”

For comparison, Volkswagen Group announced that in the future will use a single Scalable Systems Platform (SSP) and a unified cell concept – one type of battery cell format for almost all cars.

According to Elon Musk, the company intends to achieve a rate of production of the new 4680 battery cell format of 100 GWh per year, by the end of next year.

“Elon notes that Tesla has a massive amount of equipment that will be coming for the mass production of 4680 cells. “Most likely, we’ll hit an annualized rate of 100 GWh per year by the end of next year,””

Assuming that it would be reached in December 2022, the company would have to produce more than 8.3 GWh of cells in a single month. That’s very ambitious, especially taking into consideration that no one ever produced such cells in volume.

““We will definitely make 4680 reliable enough for vehicles. There are a number of challenges when transitioning from small-scale production to large-scale production,” Musk said. The 4680 cells’ reliability has been validated, though, with cells having been tested for the *equivalent* of 1 million miles.”

Elon Musk hint also a big boost in Tesla’s cell availability in 2022 – there will be twice as many cells as in 2021.

Another interesting thing is that Tesla intends to gradually move away from cobalt in batteries. The amount of cobalt is already limited in Panasonic’s NCA type and LG Energy Solution’s NMC type, while CATL’s LFP does not include cobalt at all.

Tesla will increase the use of LFP cathode chemistry in the future in cars, and most likely will use only LFP in energy storage systems (Powerwalls and Megapacks.).

One of the most interesting things is the plan for the Tesla Model Y production in Giga Berlin plant. The car will be equipped with the front and the rear casting, as well as the structural battery pack. However, if the 4680 cell availability would be constrained, the company has a backup plan to use 2170 cells.

“The Model Y in Berlin will have a cast rear body and cast front body. We’re going to structural packs,” Musk said. The CEO did state that Tesla has a backup plan with a non-structural pack and 2170 cells, but 4680 cells will definitely be used for scale production.”