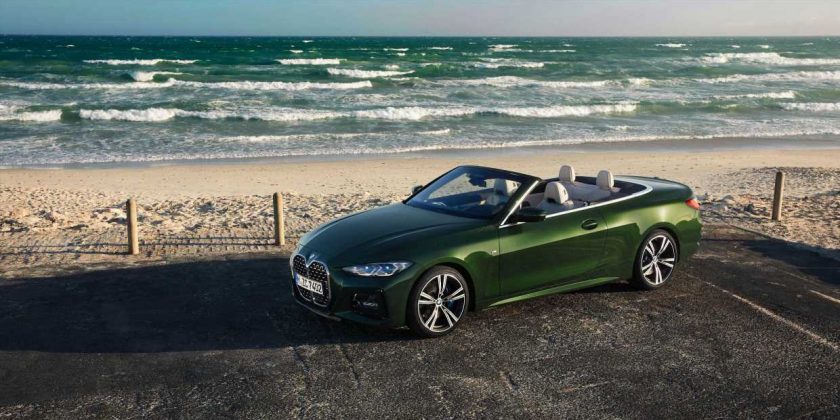 Following the reveal of the M3 sedan and the M4 coupe, BMW is showing off the latest generation of its 4-Series Convertible. While it might be hard to believe, this is only the second generation of the 4-Series Convertible since it was spun off of the 3-Series lineup in 2013. For 2021, BMW aggressively restyled the 4-Series, added some oomph and expanded its technical powers with extra tech.

The BMW 4-Series Convertible is expected to hit your BMW dealer in March, 2021.

The 2021 BMW 4-Series Convertible’s styling might be the most polarizing to ever grace a 4-Series.

The rear styling is somewhat reserved, with no huge attention-drawing design features.

The nose of the 2021 BMW 4-Series is, well, the polar opposite of the rear. It’s massive kidney bean grill is polarizing.

The 2021 BMW 4-Series Convertible shares most features with its fixed-top counterpart.

The I6, for those that speak BMW, is the beloved B58 powerplant.

The four-cylinder-powered 430i and 430i xDrive models will see 255 hp and 295 lb-ft of torque head through its eight-speed transmission before heading to the rear or all-four wheels.

The more-powerful 3.0-liter models will see 382 hp and 369 lb-ft of torque head through its eight-speed automatic before heading to its respective drive wheels.

As you would expect, the 48-volt system is a starter/generator based system using the engine’s accessory drive to distribute power.

The 2021 BMW 4-Series Convertible also features a special safety system using pyrotechnics to propel high-strength aluminum bars out from behind the head restraints in the event of a roll over.

BMW has also made improvements to the 2021 4-Series Convertible’s top.

BMW has flush mounted the rear glass and made the top material smoother to better wind noise and aerodynamics.

BMW also has added more insulation to the top to cut the wind noise down even further.

BMW Claims the top assembly can go up or down in only 18 seconds.

Springing for the more powerful 440i models sets you back at least $64,995 including the destination charge.

Here you can see the large kidney bean grille design that graces the new 4-Series.

The interior of the 2021 4-Series is posh, with a new version of iDrive controlling your infotainment system.

Here you can better see the changes to the 2021 4-Series Convertible’s top. The flush-mounted rear window and the top material should make this convertible quieter at highway speeds.