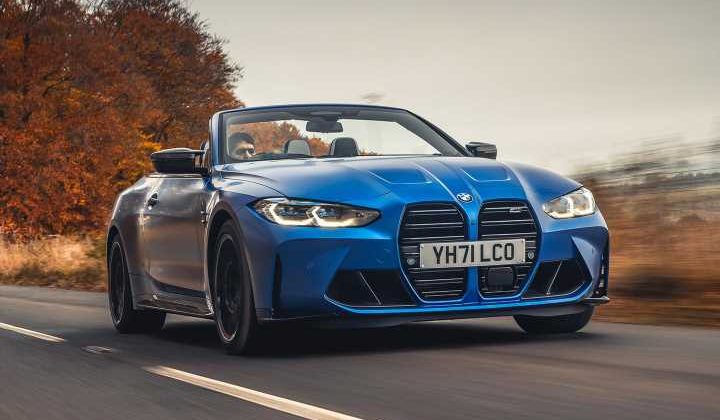 The all-wheel-drive M4 loses its roof, but not its point

It’s hard to replace a hero, but that was never going to be a risk for the new BMW M4 convertible. The previous F83 cabrio always felt like a very blunt instrument next to the surgical precision of the Coupe, the open car compromised by the need to lug around a heavy, cumbersome folding hardtop – one that made it 250kg heavier than its perma-roofed sister – while also suffering from a lack of torsional rigidity that even the inattentive would soon notice. I remember driving one with my young daughter pointing at the wobbling rear-view mirror from the back seat as we passed over a bumpy road and asking “is it meant to do that?”

The new G83 follows the regular 4-Series cabrio’s switch to a fabric soft top, trimming the mass supplement over the equivalent M4 Competition xDrive coupe to a more reasonable 145kg. But the decision to only offer the Convertible with all-wheel drive, alongside the general fattening up of the rest of the family, means this is the heaviest member of the clan so far. An EU kerbweight of 1,995kg puts the new Convertible within a bag of potatoes of being a two tonne M4, a figure that will have many rushing to judgement.

But, before donning a black cap for that guilty verdict, some other evidence deserves to be considered. Because lots of other numbers have increased too, and a few have fallen. The Convertible gets the most powerful 510hp version of the 3.0-litre twin-turbocharged engine, with xDriven traction delivering a claimed 3.7-second 0-62mph time, compared with 431hp and 4.4-second benchmark for the F83 cabrio with the DCT.

The transmission has gained both a ratio and a torque converter, a standard eight-speed auto replacing the old seven-speed twin-clutcher, with the option of a manual transmission now dropped entirely. No surprise that the other significantly inflated number is the one with a pound sign in front of it: the Convertible now has an £82,085 kick-off – £3,800 more than the xDrive Competition Coupe – with the well-optioned car I drove being £96,225. For context the F83 had an OTR of £60,745 when it was launched in 2014.

Figures aside, the most important thing about the new M4 Convertible when experienced on the road is that it now feels much closer to the Coupe in terms of both driving dynamics and general niceness than its predecessor did. For a start – subjective call – it looks better. The startled squirrel front end of the XL grille remains the cabrio’s defining visual feature, one that many can’t see beyond, but which certainly looks less overpowering in black and without chrome adornment. The black fabric roof looks better in place than the F83’s gappy body coloured hardtop did, and with the hood stowed the new car enjoys a lower and sleeker rear deck. Granted, the racey diffuser-look trim around the quad exhausts looks silly on a car without a roof – presumably it’s there to give some visual justification for the ‘Competition’ tag.

Manufacturers often choose launch routes to carefully shield cars from unwanted dynamic challenges, so I ignored BMW’s itinerary and used local knowledge to pick out some rugged and poorly-laid Oxfordshire backroads for my time with the gar. The G83 coped with all of them impressively well, delivering a dynamic experience that felt impressively close to the Coupe on quicker and more committed bits, and staying rigid over imperfections. It’s not an open-topped bank vault, there was still the sense of slight movement through the steering column as the body flexed plus very slight mirror vibration over certain frequencies of bumps. But it was nothing like the wibbly wobbly F83.

The new car is heavier, yet it feels lighter. Much of that is doubtless due to the various dynamic systems working hard beneath the surface, especially the torque-juggling rear differential. As in the RWD M3 and M4, this gives an exciting, oversteer-imminent feel even some way short of the reaching the limit of rear axle grip. Torque is delivered to the front end pretty much invisibly, BMW saying that effort is only sent for’ard when adhesion runs short at the back. In the stability control’s more permissive Sport mode it is possible to select a ‘4WD Sport’ setting which frees things up enough to allow a carefully policed amount of rear end breakaway at low speeds. But the much-vaunted pure rear-drive mode can only be selected by turning the stability control completely off.

In the interests of scientific enquiry, I did this. De-energising the guardians and halving the number of driven wheels doesn’t immediately turn the M4 into a hedge-seeking widowmaker, and it actually launched impressively cleanly even without traction management. But the combination of a slippery bit of road and the abrupt arrival of the M4’s peak torque also created an adrenaline-jolting dose of third-gear wheelspin shortly afterwards. It’s hard to imagine a typical M4 Convertible owner opting to experience the “on your own” setting too often.

While the model’s extra mass knocks acceleration slightly, being two tenths slower than the Coupe on official 0-62mph numbers, there is no discernible difference in G-loadings when fully unleashed, its brutal acceleration accompanied by a similarly macho soundtrack. The noise quality is different from the Coupe even with the roof up – more of what is reflected from nearby surfaces gets back into the car. With the top lowered it sounds impressively snarly and savage, especially once the light is glowing next to the tailpipe icon for the switchable sports exhaust.

The M4 Convertible’s mass is more obvious in corners; the Pilot Sport 4S tyres worn by the test car able to generate huge grip even on greasy 10-degree tarmac. The steering feels as good as it does in the Coupe, dialled-in and supremely accurate and delivering massive, proportionate front-end bite. There is pretty much none of the understeer that even potent performance cars normally use to guard their limits. Even when pushing hard in tight turns the M4 feels as if the back will always give before the front. And while overall adhesion is certainly less than that of the xDrive Coupe, it’s not by enough to make a difference you could complain about at road speeds.

Other complaints? Really not many. Carbon fibre remains a poor material to make gearshift paddles out of, these lacking the weight and reassuringly chilly solidity of metal ones. The decision to specify my test car with the M Carbon bucket seats was also an odd one; I’m not really a fan of these in the Coupe given how awkward they make getting in and out – and in the Convertible the pseudo harness cut outs also created some chilly draughts with the roof down. That’s right, I’m reduced to grumbling about cold air in a cabriolet.

Previous M3 and M4 Convertibles have often felt compromised by their decapitation. Objectively this one still is, being heavier and less rigid than its Coupe sister. Yet from the driver’s seat that is only occasionally evident, and probably insufficient to dilute the appeal for anyone wanting to experience the breezier thrill of the open-air version.