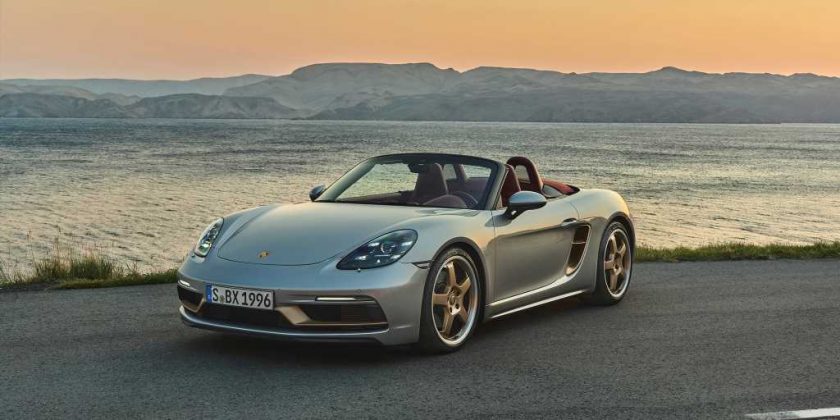 It might be hard to believe, but the Porsche Boxster is almost 25 years old. The original Boxster concept was first shown at the 1993 Detroit Auto Show, and the production version of the car made its way to showrooms just three years later (four if you lived in North America). We described that original 986-generation Boxster as “pure handling magic: responsive, agile, communicative, tenacious,” and none of that has changed a quarter of a century later.

To celebrate the Boxster’s 25th anniversary, Porsche is throwing a little birthday party for it by way of a special anniversary model. The 2021 Boxster 25 is essentially a 718 Boxster GTS 4.0 (because the original wouldn’t be caught dead with a turbo four-popper ahead of its rear axle) with design cues that hark back to the original Boxster concept. Neodyme, the somewhere in between gold and copper color that appeared on the wheels of the OG Boxster concept, is used to accent the Boxster 25’s front and side air intakes, badging, and 20-inch wheels.

Just like the original show car, the Boxster 25 will be available in GT Silver Metallic, but Jet Black and Carrera White Metallic are both available as an option. The cabin also calls to the Boxster concept for inspiration. A completely Bordeaux Red leather interior and a red convertible top sets off the silver paintwork and Neodyme accents. If you aren’t a fan of red interiors, black leather is an option—as is a black convertible top. That said, if you want a proper homage to the original Boxster, then silver over red is the only way to go.

The Boxster 25 does away with the turbocharged four-cylinder engines that are used in the standard 718 Boxster and instead brings back that sonorous flat-six soundtrack. It also makes a very hardy 394 hp and pairs with either a six-speed manual transmission or Porsche’s seven-speed dual-clutch automatic “PDK” gearbox. The top speed for the Boxster 25 is 182 mph with the manual, and it’ll reach 60 mph from a dig in 3.8 seconds, provided you have the PDK and Sport Chrono. Psst, get the manual anyway.

Other normally optional goodies that come with the Boxster 25 include Porsche’s active suspension management (or PASM) and a mechanical limited-slip differential, otherwise known as Porsche Torque Vectoring. If this special anniversary model tickles your fancy, you’ll have to pony up a hearty $99,950 when it arrives in dealerships this spring.