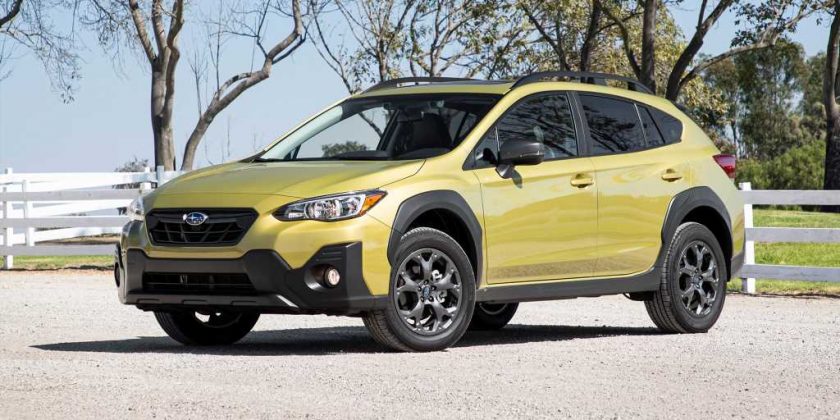 Being a segment leader is hard work, especially in a segment as hot as subcompact SUVs, which continues to grow rapidly. Subaru already has a solid foundation to stay on top, and now, the Forester’s 2.5-liter flat-four engine is finding its way under the Crosstrek’s hood in Sport and Limited trims. Will a more powerful engine be enough to keep this crossover relevant and fend off new rivals? We got a 2021 Subaru Crosstrek Sport in to find out.

Does the Subaru Crosstrek Drive Better with More Power?

We’ve been begging Subaru for a more powerful Crosstrek since it made its debut as a 2013 model. Seven years later, the automaker finally obliged. So does the 2.5-liter’s 182 hp and 176 lb-ft of torque make a noticeable difference over the base 2.0-liter’s 152 hp and 145 lb-ft? Oh yeah. Passing, merging, and climbing steep inclines are a cinch; the Crosstrek moves promptly thanks to the bigger engine. In comparison, models with the 2.0-liter feel excruciatingly sluggish, especially on the freeway. Put your foot down at highway speeds, and the CVT immediately puts the engine in the sweet spot. However, from a standstill or at parking lot speeds, the transmission gets jumpy when you ease into the throttle, causing some head toss.

At the track, the Crosstrek Sport hit 60 mph in 7.8 seconds and the quarter mile in 16.0 seconds at 87.7 mph. Our departed long-term Crosstrek 2.0i Premium took 1.2 seconds longer to reach 60 mph before finishing the quarter mile 0.9 second slower at 83.4 mph. Road test editor Chris Walton noted linear power delivery in Sport mode when launched with pedal overlap. If you just mash the accelerator, the CVT simulates shifts, resulting in slower acceleration. The Mazda CX-30 offers similar straight-line performance to the Crosstrek Sport. Turbocharged versions of the Kia Seltos are quicker, hitting 60 mph in 7.3 to 7.4 seconds and the quarter mile in 15.7 to 15.9 seconds.

As with most subcompact SUVs, the Crosstrek prioritizes daily usability over outright performance. When driven sanely, this lifted hatchback possesses good high-speed stability and stable handling. Ride comfort remains a highlight thanks to the suspension’s ability to absorb road imperfections and harsh impacts without getting floaty. Accurate steering, which testing director Kim Reynolds appreciated, makes the Crosstrek easy to maneuver through corners and tight spaces. Body roll, while well-controlled, is noticeable because of the car’s comfort-minded tuning.

On the skidpad, the Crosstrek Sport generated 0.79 g of lateral acceleration and finished the figure-eight course in 27.9 seconds with a 0.60 g average, which is in the same ballpark as the Mazda CX-30 and Kia Seltos. Surprisingly, our old long-term Crosstrek 2.0i Premium was quicker through the figure eight (27.3 seconds) but provided similar road-holding capabilities as our Sport trim test car. Even more surprising: The plug-in Subaru Crosstrek Hybrid lapped the figure eight in 27.3 seconds at 0.62 g average. Reynolds noted excessive understeer at the limit along with a noticeable lack of grip. Blame the latter on the standard all-season tires, which give up before the chassis does. Stopping from 60 mph took 124 feet, which is on par with most subcompact SUVs. Walton observed good initial bite but found that the Crosstrek dives a lot and the rear gets light during hard braking.

Despite its small exterior footprint, the Crosstrek is supremely practical. Four adults fit comfortably, and the cargo area easily swallows bulky items, especially with the rear seats folded. Big windows provide an airy atmosphere and excellent visibility. The Crosstrek’s solid materials will easily handle daily commuting and hauling your outdoorsy gear. It could use more sound insulation, though, because there’s an excessive amount of engine and tire noise entering the cabin. Mazda’s CX-30 has a quieter, more premium-feeling interior, but you sacrifice practicality and space as a trade-off.

The Crosstrek uses a version of Subaru’s infotainment system that doesn’t include the 11.6-inch display found in the Legacy and Outback. Our test car had the optional 8.0-inch touchscreen (a 6.5-inch unit is standard) complemented by physical shortcut buttons and knobs. This means you’ll figure out how to use the interface in seconds, not hours like the new setup in other Subarus. You won’t be digging through submenus in this iteration because most of the frequently used apps and features are one or two inputs away.

EyeSight, Subaru’s active safety suite, remains one of the more accurate systems. Lane keep assist does a great job maintaining the center of the lane, gently nudging you over when you get close to the dividers. Adaptive cruise control accelerates and brakes naturally, and the distancing isn’t so conservative that another vehicle can cut you off. If only the system would stop making so much noise. EyeSight beeps to let you know when the lane keeping system’s steering assistance component turns off and when the two stereo cameras don’t see the lane lines. Yeah, it gets irritating quickly.

Is the Subaru Crosstrek Still One of the Best?

The Subaru Crosstrek’s multitalented nature has helped it become a best-seller in the subcompact SUV class. With more power available on the Sport and Limited trims, you get to have your cake and eat it too. No, this doesn’t turn the Crosstrek into a lifted hot hatch. Instead, think of this as a drivability enhancement that makes the car even more compelling despite the arrival of new competition. Comfortable, practical, easy to drive, and efficient (EPA-rated at 26/34 mpg city/highway with the 2.5-liter), this little rig is a well-rounded package. We hope that the next-generation Crosstrek builds on this formula, and maybe—just maybe—a subcompact SUV will finally nab the Golden Calipers.