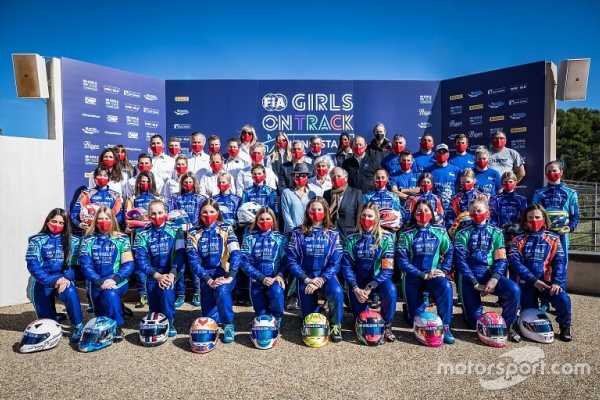 The FIA Girls on Track Rising Stars programme moves closer to its conclusion as the selection process gets down to the final eight battling for a place in the Ferrari Driver Academy.

Having started the initiative back in March 2018 with the FIA European Young Women Programme, it set out a two-year project to increase participation of women in motorsport by focusing on youngsters by providing them with their first experience into the sport.

The initial plan saw a new concept developed by the FIA where a small tarmac area in a central urban location would be transformed into a karting slalom course, with the aim of inspiring girls to give it a try and open up motorsport to a new and young audience.

Having gone from strength to strength across the following two years, the next step has seen the launch of the FIA Girls on Track Rising Stars programme in association with Scuderia Ferrari in June.

The month-long competition, shown on Motorsport.tv, offers one of the ultimate opportunities for any aspiring young driver – a place in the Ferrari Driver Academy.

The goal of the programme is to identify the brightest young female talent from across the world and help them reach a professional career in motorsport.

All of the drivers involved in the programme were invited to an assessment weekend at Circuit Paul Ricard’s karting track.

Overseen by the Michele Mouton, President of the FIA Women in Motorsport Commission, all the 20 young drivers invited to the assessment camp were provided with equal karting machinery and support from the FIA officials running the programme to help them get up to speed. All girls took part in practice, qualifying and a final on day one to decide the final 12 selected for the next stage.

With support from Winfield Racing School based at Circuit Paul Ricard, the assessors had access to all of the girls telemetry and data from their efforts on the track, to not only help the girls improve their skills but it also acted as a key performance indicator in their assessment.

On the second day of the training camp a race simulation was held to decide the top eight to be selected to take part in the second training camp where the participants step up from karts to drive Formula 4 cars.