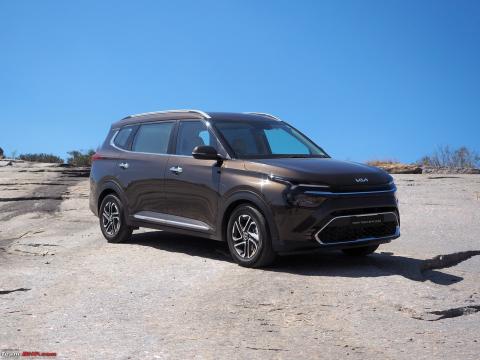 Out on the highway, the Kia Carens stays composed even at triple digit speeds. Its road manners are neutral, just as you would expect from a 3-row family crossover.

The engine options in the Kia Carens remain the same as those in the Seltos and Hyundai Creta. Kia has not opted for the 2.0L NA petrol engine which Hyundai is using in the Alcazar and instead used the familiar 1.4L T-GDi motor. This engine is available with a 6-speed MT or a 7-speed DCT.

The Kia Carens shares its 1.5-litre diesel engine with the Creta and Seltos. To read about the diesel’s performance & drivability, please refer to this engine review post.

Driving the 1.4L Turbo Petrol AT The 1.4L turbo petrol works well in the Carens. It has more than adequate performance to keep the enthusiast interested and at the same time, the mid range and intuitive DCT work brilliantly for sedate family duties.

Fire up the engine and you are greeted by silence. The 1.4L engine is exceptionally refined at idle. It moves off seamlessly from a standstill, with minimal lag. Light accelerator input is all you’ll need to commute in the city. The gearbox moves up early, while shifts are quick and super smooth. Driving in a regular style, you’ll never even know that the gears are being changed. Due to the refinement of the engine, there’s no sound of the engine tone changing either.

The turbo petrol is very fast and with 138 BHP + 242 Nm on tap, the gearbox’s job is made easier. The DCT is almost never found hunting for gears. The combination of this engine, smooth gearbox, light steering, excellent ergonomics, properly placed dead pedal and good frontal visibility make the Carens a breeze to drive. We were driving through Bangalore traffic in the morning and it was effortless. It can crawl in bumper to bumper traffic conditions at 6 – 7 km/h after you lift your foot off the brake pedal in ‘D’. This way, you can drive in heavy traffic with just the brake pedal. Be warned though, the practice has a downside and you shouldn’t do it for an extended duration. The DCT starts heating up. In the worst situation, if you get the transmission overheating warning, just pull over and let the gearbox cool down. Kia claims that this problem has been fixed in the newer iterations by software tuning.

The powerful turbo-petrol gives the Carens AT very long legs. It is punchy and fast on the expressway and will keep petrol-heads happy. Floor the accelerator and you’ll see a bit of torque steer too. The mid-range is strong as is typical of turbo engines; this is very helpful during overtaking. On the expressway, at 100 km/h, the engine spins at a relaxed ~1,800 rpm. We found the kickdown response time to be satisfactory. The transmission and turbo are quick to respond and the reaction times are short enough. Pushed hard, the engine will revv to just ~5,900 rpm before the transmission shifts up. We found the rev limit to be low for a petrol engine. It appears that Kia have intentionally tuned the DCT to be more conservative. When you try to launch hard, the revs don’t go above 1,600 rpm. The gearbox also doesn’t hold on to any gear till the redline, but will upshift on it’s own at ~5,900 rpm. In the the Hyundai Creta, the engine revvs till 6,250 rpm. There is also an “S” mode which makes the transmission more aggressive. This mode can be engaged by moving the gear shifter to the right. Use it when you’re in the mood for fun, or just temporarily to quickly overtake someone. You also get paddle shifters in the Carens that work in D mode for a short duration or you can set the gear shifter to S mode and use the paddles.

Normal: This is the default mode. It is suitable for sedate driving and cruising. The throttle response is relaxed, but acceptable. There is enough poke to close gaps in traffic or overtaking on expressways. If you are cruising on the highway and driving normally inside town, this mode is perfect.

Eco: Engage ‘Eco’ mode to take the engine into its most fuel-efficient mode. This mode is good in town for sedate relaxed driving, but we hardly used it as it was too muted. Throttle response is dull and when the engine responds. there’s more noise than poke. This gets annoying even in urban settings or relaxed cruising.

Sport: Engaging Sport makes the car noticeably more responsive to throttle inputs. This is the “fun” mode. The 1.4 turbo petrol has a nice note as it picks up speed quickly. Revs are held longer before upshifts, and the transmission doesn’t hesitate dropping two or even three cogs if you even press the pedal a little. The best part is that the steering weighs up well. On a highway this mode is simply perfect.

The gearbox can be also used in “S” mode by moving the gear shifter to the left, but we found this mode held on to gears unnecessarily and wasn’t ideal in town or on the highway.

The Carens being larger and presumably heavier than the Seltos and Creta, we do have some concerns about the gearbox’s longevity. With a full load of 6-7 passengers, the performance will be blunted to an extent. The turbo petrol also gets thirsty when pushed hard and prefers a more relaxed driving style. However, it should still be better than the 2.0L in the Alcazar.

The Carens has exceptional refinement & NVH levels. The engine is barely audible at slow speeds while driving around town. It is only at higher revvs that you can hear the engine. There’s minimal-to-zero sound heard in the cabin if you’re driving calmly. If you are seated in the 2nd row, you will probably never hear the motor when chauffeured around town. Even while cruising on the highway, the engine is quiet enough. The engine sounds alright till ~5,500 rpm. Above that, it starts to get boomy.

I was surprised at how wind noise was well contained and needed much higher speeds for it to be noticeable. Road noise was also not very prominent except on some surface. Kia have clearly worked hard on the NVH here.

Even without any insulation under the bonnet, the 1.4L is among the quietest and most refined motors in this segment: Kia has learnt its lesson well here and fixed the Seltos’ biggest gripe. The Carens rides far better than the Seltos. You can sail over broken non-existent patches of road at 30 km/h and not feel anything inside the cabin. I had commented to Chetan that my Kodiaq would struggle on that particular stretch. The suspension doesn’t crash into bumps and potholes and passengers are not jostled from side to side as much. It’s only the real nasty craters that send a thud into the cabin. Otherwise, you will love how comfortable the Carens is even on poor roads. A part of it has to do with the fact that Kia has opted for 16-inch rims with fairly high profile 205/65 tyres. This provides an additional layer of cushioning. Ride quality is impressive for the segment, arguably even for a segment above.

Out on the highway, the Carens stays composed even at triple digit speeds. Its road manners are neutral, just as you would expect from a 3-row family crossover. You can cruise at highway speeds quite comfortably. You only feel the softer suspension and additional length during quick lane changes. The rear swings around a little later after you turn the wheel. It’s more about being able to know how hard you can chuck the car around when doing abrupt direction changes.

Throw the Carens into a corner and it responds better than you’d expect from a 6/7-seater. Yes, there’s body roll, but it’s within acceptable limits (nowhere as sporty as a Kia Seltos). It’s very car-like and less MPV-like, which means you can maintain a line across a corner without lifting off. We tried sharp maneuvering around a few barricades in a controlled environment, and the car managed it without fuss or the electronics kicking in to intervene. Impressive for an MUV! Also, it’s good to know that the Carens has electronic stability control across all variants to help in emergency situations.

The steering is one finger light in the city and weighs up nicely as you gain speed. Don’t expect much feel or feedback though. The steering weighs up in Sport mode albeit artificially. It just offers more resistance, which works well when driving on expressways. It is unnecessarily heavy for single lane roads in Sport mode.

Rear disc brakes are standard across all variants, which is a good thing. They work well in normal as well as emergency conditions and owners won’t complain. They do the job.

Continue reading the discussion on the Hyundai Carens on our forum.